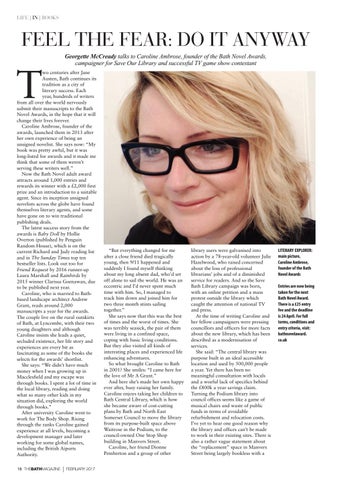 FEEL THE FEAR: DO IT ANYWAY Georgette McCready talks to Caroline Ambrose, founder of the Bath Novel Awards, campaigner for Save Our Library and successful TV game show contestant

wo centuries after Jane Austen, Bath continues its tradition as a city of literary success. Each year, hundreds of writers from all over the world nervously submit their manuscripts to the Bath Novel Awards, in the hope that it will change their lives forever. Caroline Ambrose, founder of the awards, launched them in 2013 after her own experience of being an unsigned novelist. She says now: “My book was pretty awful, but it was long-listed for awards and it made me think that some of them weren’t serving these writers well.” Now the Bath Novel adult award attracts around 1,000 entries and rewards its winner with a £2,000 first prize and an introduction to a suitable agent. Since its inception unsigned novelists across the globe have found themselves literary agents, and some have gone on to win traditional publishing deals. The latest success story from the awards is Baby Doll by Hollie Overton (published by Penguin Random House), which is on the current Richard and Judy reading list and in The Sunday Times top ten bestseller lists. Look out too for Friend Request by 2016 runner-up Laura Marshall and Rainbirds by 2015 winner Clarissa Goenawan, due to be published next year. Caroline, who is married to Bathbased landscape architect Andrew Grant, reads around 2,000 manuscripts a year for the awards. The couple live on the rural outskirts of Bath, at Lyncombe, with their two young daughters and although Caroline insists she leads a quiet, secluded existence, her life story and experiences are every bit as fascinating as some of the books she selects for the awards’ shortlist. She says: “We didn’t have much money when I was growing up in Macclesfield and my escape was through books. I spent a lot of time in the local library, reading and doing what so many other kids in my situation did, exploring the world through books.” After university Caroline went to work for The Body Shop. Rising through the ranks Caroline gained experience at all levels, becoming a development manager and later working for some global names, including the British Aiports Authority. 18 TheBATHMagazine

“But everything changed for me after a close friend died tragically young, then 9/11 happened and suddenly I found myself thinking about my long absent dad, who’d set off alone to sail the world. He was an eccentric and I’d never spent much time with him. So, I managed to track him down and joined him for two three month stints sailing together.” She says now that this was the best of times and the worst of times. She was terribly seasick, the pair of them were living in a confined space, coping with basic living conditions. But they also visited all kinds of interesting places and experienced life enhancing adventures. So what brought Caroline to Bath in 2001? She smiles: “I came here for the love of Mr A Grant.” And here she’s made her own happy ever after, busy raising her family. Caroline enjoys taking her children to Bath Central Library, which is how she became aware of cost-cutting plans by Bath and North East Somerset Council to move the library from its purpose-built space above Waitrose in the Podium, to the council-owned One Stop Shop building in Manvers Street. Caroline, her friend Dionne Pemberton and a group of other

library users were galvanised into action by a 78-year-old volunteer Julie Hazelwood, who raised concerned about the loss of professional librarians’ jobs and of a diminished service for readers. And so the Save Bath Library campaign was born, with an online petition and a mass protest outside the library which caught the attention of national TV and press. At the time of writing Caroline and her fellow campaigners were pressing councillors and officers for more facts about the new library, which has been described as a modernisation of services. She said: “The central library was purpose built in an ideal accessible location and used by 500,000 people a year. Yet there has been no meaningful consultation with locals and a woeful lack of specifics behind the £800k a year savings claim. Turning the Podium library into council offices seems like a game of musical chairs and waste of public funds in terms of avoidable refurbishment and relocation costs. I’ve yet to hear one good reason why the library and offices can’t be made to work in their existing sites. There is also a rather vague statement about the “replacement” space in Manvers Street being largely bookless with a

LITERARY EXPLORER: main picture, Caroline Ambrose, founder of the Bath Novel Awards Entries are now being taken for the next Bath Novel Award. There is a £25 entry fee and the deadline is 24 April. For full terms, conditions and entry criteria, visit: bathnovelaward. co.uk