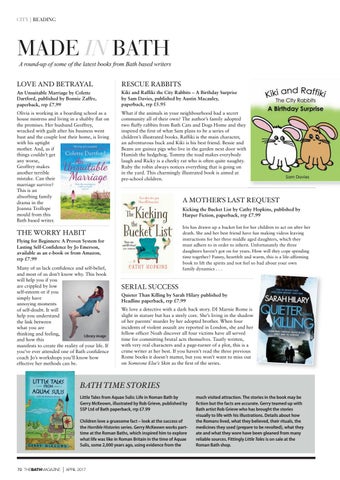 Olivia is working in a boarding school as a house mistress and living in a shabby flat on the premises. Her husband Geoffrey, wracked with guilt after his business went bust and the couple lost their home, is living with his uptight mother. And, as if things couldn’t get any worse, Geoffrey makes another terrible mistake. Can their marriage survive? This is an absorbing family drama in the Joanna Trollope mould from this Bath based writer.

What if the animals in your neighbourhood had a secret community all of their own? The author’s family adopted two fluffy rabbits from Bath Cats and Dogs Home and they inspired the first of what Sam plans to be a series of children’s illustrated books. Raffiki is the main character, an adventurous buck and Kiki is his best friend. Bessie and Beans are guinea pigs who live in the garden next door with Hamish the hedgehog. Tommy the toad makes everybody laugh and Ricky is a cheeky rat who is often quite naughty. Ruby the robin always notices everything that is going on in the yard. This charmingly illustrated book is aimed at pre-school children.

Iris has drawn up a bucket list for her children to act on after her death. She and her best friend have fun making videos leaving instructions for her three middle aged daughters, which they must adhere to in order to inherit. Unfortunately the three daughters haven’t got on for years. How will they cope spending time together? Funny, heartfelt and warm, this is a life-affirming book to lift the spirits and not feel so bad about your own family dynamics . . .

Flying for Beginners: A Proven System for Lasting Self-Confidence by Jo Emerson, available as an e-book or from Amazon, rrp £7.99 Many of us lack confidence and self-belief, and most of us don’t know why. This book will help you if you are crippled by low self-esteem or if you simply have annoying moments of self-doubt. It will help you understand the link between what you are thinking and feeling, Library image and how this manifests to create the reality of your life. If you’ve ever attended one of Bath confidence coach Jo’s workshops you’ll know how effective her methods can be.

Quieter Than Killing by Sarah Hilary published by Headline paperback, rrp £7.99 We love a detective with a dark back story. DI Marnie Rome is slight in stature but has a steely core. She’s living in the shadow of her parents’ murder by her adopted brother. When four incidents of violent assault are reported in London, she and her fellow officer Noah discover all four victims have all served time for committing brutal acts themselves. Tautly written, with very real characters and a page-turner of a plot, this is a crime writer at her best. If you haven’t read the three previous Rome books it doesn’t matter, but you won’t want to miss out on Someone Else’s Skin as the first of the series.

Little Tales from Aquae Sulis: Life in Roman Bath by Gerry McKeown, illustrated by Rob Grieve, published by SSP Ltd of Bath paperback, rrp £7.99 Children love a gruesome fact – look at the success of the Horrible Histories series. Gerry McKeown works parttime at the Roman Baths, which inspired him to explore what life was like in Roman Britain in the time of Aquae Sulis, some 2,000 years ago, using evidence from the

much visited attraction. The stories in the book may be fiction but the facts are accurate. Gerry teamed up with Bath artist Rob Grieve who has brought the stories visually to life with his illustrations. Details about how the Romans lived, what they believed, their rituals, the medicines they used (prepare to be revolted), what they ate and what they wore have been gleaned from many reliable sources. Fittingly Little Tales is on sale at the Roman Bath shop.