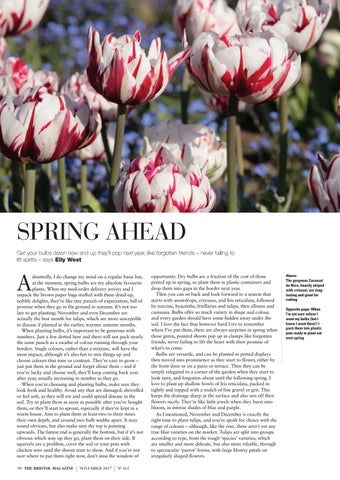 SPRING AHEAD Get your bulbs down now and up they’ll pop next year, like forgotten friends – never failing to lift spirits – says Elly West

dmittedly, I do change my mind on a regular basis but, at the moment, spring bulbs are my absolute favourite plants. When my mail-order delivery arrives and I unpack the brown paper bags stuffed with these dried-up, nobbly delights, they’re like tiny parcels of expectation, full of promise when they go in the ground in autumn. It’s not too late to get planting; November and even December are actually the best month for tulips, which are more susceptible to disease if planted in the earlier, warmer autumn months. When planting bulbs, it’s important to be generous with numbers. Just a few dotted here and there will not pack nearly the same punch as a swathe of colour running through your borders. Single colours, rather than a mixture, will have the most impact, although it’s also fun to mix things up and choose colours that tone or contrast. They’re easy to grow – just put them in the ground and forget about them – and if you’re lucky and choose well, they’ll keep coming back year after year, usually increasing in number as they go. When you’re choosing and planting bulbs, make sure they look fresh and healthy. Avoid any that are damaged, shrivelled or feel soft, as they will rot and could spread disease in the soil. Try to plant them as soon as possible after you’ve bought them, or they’ll start to sprout, especially if they’re kept in a warm house. Aim to plant them at least two to three times their own depth, and around two bulb widths apart. It may sound obvious, but also make sure the top is pointing upwards. The fattest end is generally the bottom, but if it’s not obvious which way up they go, plant them on their side. If squirrels are a problem, cover the soil or your pots with chicken wire until the shoots start to show. And if you’re not sure where to put them right now, don’t miss the window of 90 THE BRISTOL MAGAZINE

opportunity. Dry bulbs are a fraction of the cost of those potted up in spring, so plant them in plastic containers and drop them into gaps in the border next year. Then you can sit back and look forward to a season that starts with snowdrops, crocuses, and Iris reticulata, followed by narcissi, hyacinths, fritillaries and tulips, then alliums and camassia. Bulbs offer so much variety in shape and colour, and every garden should have some hidden away under the soil. I love the fact that however hard I try to remember where I’ve put them, there are always surprises in spring when those green, pointed shoots pop up in clumps like forgotten friends, never failing to lift the heart with their promise of what’s to come. Bulbs are versatile, and can be planted in potted displays then moved into prominence as they start to flower, either by the front door or on a patio or terrace. Then they can be simply relegated to a corner of the garden when they start to look tatty, and forgotten about until the following spring. I love to plant up shallow bowls of Iris reticulata, packed in tightly and topped with a mulch of fine gravel or grit. This keeps the drainage sharp at the surface and also sets off their flowers nicely. They’re like little jewels when they burst into bloom, in intense shades of blue and purple. As I mentioned, November and December is exactly the right time to plant tulips, and you’re spoilt for choice with the range of colours – although, like the rose, there aren’t yet any true blue varieties on the market. Tulips are split into groups according to type, from the tough ‘species’ varieties, which are smaller and more delicate, but also more reliable, through to spectacular ‘parrot’ forms, with large blowsy petals on irregularly shaped flowers.

Above: The gorgeous Carnaval de Nice, heavily striped with crimson, are longlasting and great for cutting Opposite page: When I’m not sure where I want my bulbs (but I know I want them!) I pack them into plastic pots ready to plant out next spring