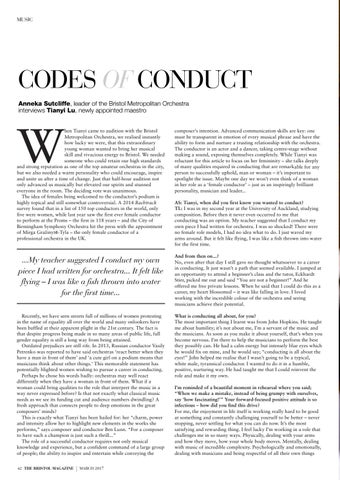 hen Tianyi came to audition with the Bristol Metropolitan Orchestra, we realised instantly how lucky we were, that this extraordinary young woman wanted to bring her musical skill and vivacious energy to Bristol. We needed someone who could retain our high standards and strong reputation as one of the top amateur orchestras in the city, but we also needed a warm personality who could encourage, inspire and unite us after a time of change. Just that half-hour audition not only advanced us musically but elevated our spirits and stunned everyone in the room. The deciding vote was unanimous. The idea of females being welcomed to the conductor’s podium is highly topical and still somewhat controversial. A 2014 Bachtrack survey found that in a list of 150 top conductors in the world, only five were women, while last year saw the first ever female conductor to perform at the Proms – the first in 118 years – and the City of Birmingham Symphony Orchestra hit the press with the appointment of Mirga Gražinytė-Tyla – the only female conductor of a professional orchestra in the UK.

...My teacher suggested I conduct my own piece I had written for orchestra... It felt like flying – I was like a fish thrown into water for the first time... Recently, we have seen streets full of millions of women protesting in the name of equality all over the world and many onlookers have been baffled at their apparent plight in the 21st century. The fact is that despite progress being made in so many areas of public life, full gender equality is still a long way from being attained. Outdated prejudices are still rife. In 2013, Russian conductor Vasily Petrenko was reported to have said orchestras ‘react better when they have a man in front of them’ and ‘a cute girl on a podium means that musicians think about other things.’ This memorable statement has potentially blighted women wishing to pursue a career in conducting. Perhaps he chose his words badly: orchestras may well react differently when they have a woman in front of them. What if a woman could bring qualities to the role that interpret the music in a way never expressed before? Is that not exactly what classical music needs as we see its funding cut and audience numbers dwindling? A fresh approach that connects people to deep emotions in the great composers’ minds? This is exactly what Tianyi has been hailed for: her “charm, power and intensity allow her to highlight new elements in the works she performs,” says composer and conductor Ben Lunn. “For a composer to have such a champion is just such a thrill...” The role of a successful conductor requires not only musical knowledge and experience, but a confident command of a large group of people; the ability to inspire and entertain while conveying the 42 THE BRISTOL MAGAZINE

composer’s intention. Advanced communication skills are key: one must be transparent in emotion of every musical phrase and have the ability to form and nurture a trusting relationship with the orchestra. The conductor is an actor and a dancer, taking centre-stage without making a sound, exposing themselves completely. While Tianyi was reluctant for this article to focus on her femininity – she talks deeply of many qualities required in conducting that are remarkable for any person to successfully uphold, man or woman – it’s important to spotlight the issue. Maybe one day we won’t even think of a woman in her role as a ‘female conductor’ – just as an inspiringly brilliant personality, musician and leader... AS: Tianyi, when did you first know you wanted to conduct? TL: I was in my second year at the University of Auckland, studying composition. Before then it never even occurred to me that conducting was an option. My teacher suggested that I conduct my own piece I had written for orchestra. I was so shocked! There were no female role models, I had no idea what to do. I just waved my arms around. But it felt like flying, I was like a fish thrown into water for the first time. And from then on...? No, even after that day I still gave no thought whatsoever to a career in conducting. It just wasn’t a path that seemed available. I jumped at an opportunity to attend a beginner’s class and the tutor, Eckhardt Stier, picked me out and said “You are not a beginner!” And he offered me free private lessons. When he said that I could do this as a career, my heart blossomed – it was like falling in love. I loved working with the incredible colour of the orchestra and seeing musicians achieve their potential. What is conducting all about, for you? The most important thing I learnt was from John Hopkins. He taught me about humility; it’s not about me, I’m a servant of the music and the musicians. As soon as you make it about yourself, that’s when you become nervous. I’m there to help the musicians to perform the best they possibly can. He had a calm energy but intensely blue eyes which he would fix on mine, and he would say; “conducting is all about the eyes!” John helped me realise that I wasn’t going to be a typical, white male, tyrannical conductor. I wanted to do it in a humble, positive, nurturing way. He had taught me that I could reinvent the role and make it my own. I’m reminded of a beautiful moment in rehearsal where you said; “When we make a mistake, instead of being grumpy with ourselves, say ‘how fascinating!’” Your forward-focused positive attitude is so infectious – how did you find this drive? For me, the enjoyment in life itself is working really hard to be good at something and constantly challenging yourself to be better – never stopping, never settling for what you can do now. It’s the most satisfying and rewarding thing. I feel lucky I’m working in a role that challenges me in so many ways. Physically, dealing with your arms and how they move, how your whole body moves. Mentally, dealing with music of incredible complexity. Psychologically and emotionally, dealing with musicians and being respectful of all their own things