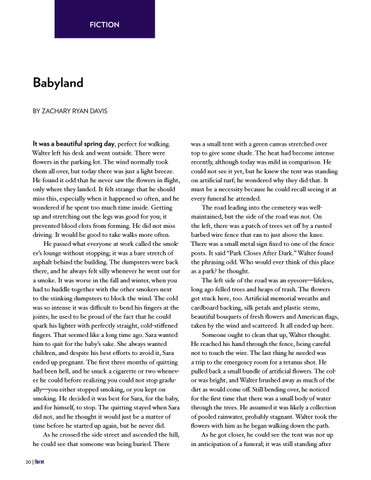 It was a beautiful spring day, perfect for walking. Walter left his desk and went outside. There were flowers in the parking lot. The wind normally took them all over, but today there was just a light breeze. He found it odd that he never saw the flowers in flight, only where they landed. It felt strange that he should miss this, especially when it happened so often, and he wondered if he spent too much time inside. Getting up and stretching out the legs was good for you; it prevented blood clots from forming. He did not miss driving. It would be good to take walks more often. He passed what everyone at work called the smoker’s lounge without stopping; it was a bare stretch of asphalt behind the building. The dumpsters were back there, and he always felt silly whenever he went out for a smoke. It was worse in the fall and winter, when you had to huddle together with the other smokers next to the stinking dumpsters to block the wind. The cold was so intense it was difficult to bend his fingers at the joints; he used to be proud of the fact that he could spark his lighter with perfectly straight, cold-stiffened fingers. That seemed like a long time ago. Sara wanted him to quit for the baby’s sake. She always wanted children, and despite his best efforts to avoid it, Sara ended up pregnant. The first three months of quitting had been hell, and he snuck a cigarette or two whenever he could before realizing you could not stop gradually—you either stopped smoking, or you kept on smoking. He decided it was best for Sara, for the baby, and for himself, to stop. The quitting stayed when Sara did not, and he thought it would just be a matter of time before he started up again, but he never did. As he crossed the side street and ascended the hill, he could see that someone was being buried. There 20 | fluent

was a small tent with a green canvas stretched over top to give some shade. The heat had become intense recently, although today was mild in comparison. He could not see it yet, but he knew the tent was standing on artificial turf; he wondered why they did that. It must be a necessity because he could recall seeing it at every funeral he attended. The road leading into the cemetery was wellmaintained, but the side of the road was not. On the left, there was a patch of trees set off by a rusted barbed wire fence that ran to just above the knee. There was a small metal sign fixed to one of the fence posts. It said “Park Closes After Dark.” Walter found the phrasing odd. Who would ever think of this place as a park? he thought. The left side of the road was an eyesore—lifeless, long ago felled trees and heaps of trash. The flowers got stuck here, too. Artificial memorial wreaths and cardboard backing, silk petals and plastic stems, beautiful bouquets of fresh flowers and American flags, taken by the wind and scattered. It all ended up here. Someone ought to clean that up, Walter thought. He reached his hand through the fence, being careful not to touch the wire. The last thing he needed was a trip to the emergency room for a tetanus shot. He pulled back a small bundle of artificial flowers. The color was bright, and Walter brushed away as much of the dirt as would come off. Still bending over, he noticed for the first time that there was a small body of water through the trees. He assumed it was likely a collection of pooled rainwater, probably stagnant. Walter took the flowers with him as he began walking down the path. As he got closer, he could see the tent was not up in anticipation of a funeral; it was still standing after 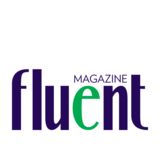