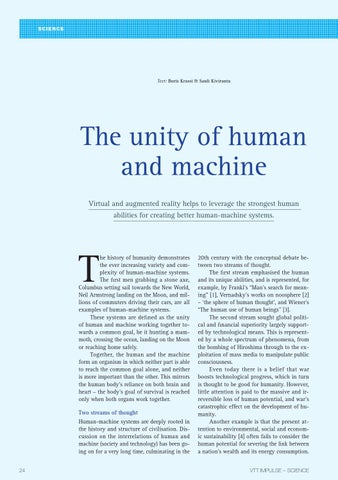 The unity of human and machine Virtual and augmented reality helps to leverage the strongest human abilities for creating better human-machine systems.

he history of humanity demonstrates the ever increasing variety and complexity of human-machine systems. The first men grabbing a stone axe, Columbus setting sail towards the New World, Neil Armstrong landing on the Moon, and millions of commuters driving their cars, are all examples of human-machine systems. These systems are defined as the unity of human and machine working together towards a common goal, be it hunting a mammoth, crossing the ocean, landing on the Moon or reaching home safely. Together, the human and the machine form an organism in which neither part is able to reach the common goal alone, and neither is more important than the other. This mirrors the human body’s reliance on both brain and heart – the body’s goal of survival is reached only when both organs work together. Two streams of thought Human-machine systems are deeply rooted in the history and structure of civilisation. Discussion on the interrelations of human and machine (society and technology) has been going on for a very long time, culminating in the 24

20th century with the conceptual debate between two streams of thought. The first stream emphasised the human and its unique abilities, and is represented, for example, by Frankl’s “Man’s search for meaning” [1], Vernadsky’s works on noosphere [2] – ‘the sphere of human thought’, and Wiener’s “The human use of human beings” [3]. The second stream sought global political and financial superiority largely supported by technological means. This is represented by a whole spectrum of phenomena, from the bombing of Hiroshima through to the exploitation of mass media to manipulate public consciousness. Even today there is a belief that war boosts technological progress, which in turn is thought to be good for humanity. However, little attention is paid to the massive and irreversible loss of human potential, and war’s catastrophic effect on the development of humanity. Another example is that the present attention to environmental, social and economic sustainability [4] often fails to consider the human potential for severing the link between a nation’s wealth and its energy consumption. VTT IMPULSE – SCIENCE

A magazine on science, technology and business. 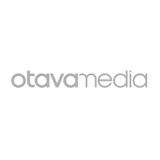