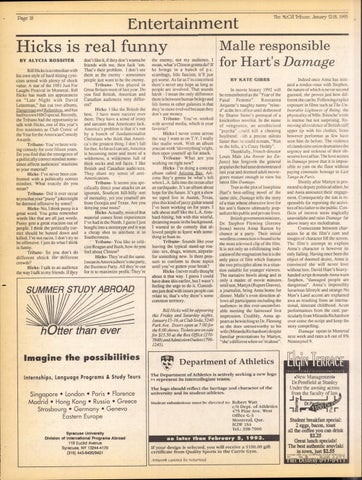 Bill Hicks is a comedian with his own style of hard-hitting cyni­ cism armed with plenty of shock value. A star of the 1991 Just For Laughs Festival in Montreal, Bill Hicks has made ten appearances on “ Late N ight with David Letterman,” has cut two albums, Dangerous and Relentless, and has had hisownHBO special. Recently, the Tribune had the opportunity to talk with Hicks, one of this year’s five nominees as Club Comic of the Year for the American Comedy Awards. Tribune- You’ve been writ­ ing comedy for over fifteen years. Do you find that the emergence of a politically correct mindset some­ times affects audiences’ reactions to your material? Hicks- I’ve never been con­ fronted with a politically correct mindset. What exactly do you mean? Tribune- Did it ever occur to you that your“pussy ”jokes might be deemed offensive by some? Hicks- No, I think pussy is a great word. You gotta remember words like that are all just words. Pussy gets a great reaction out of people. I think the politically cor­ rect should be hunted down and killed. I’m not racist. I don’t try to be offensive. I just do what I think is funny. Tribune- So you don’t do d ifferen t shtick fôr different crowds? Hicks-1 talk to an audience the way I talk to my friends. If they

don’t like it, if they don ’t wanna be friends with me, then fuck ‘em. That’s their problem. I don’t sec them as the enemy - sometimes people just want to be the enemy. T rib u n e- You played in Great Britain most of last year. Do you find British, American and Canadian audiences very differ­ ent? Hicks-1 like the British the best. I have more success over there. They have a sense of irony and sarcasm that Americans lack. America’s problem is that it’s run by a bunch of fundamentalist Christians who think that Ameri­ ca’s the greatest thing. I don’t fall for that. As far as lean see, America is becoming more and more of a wilderness, a wilderness full of thick necks and red faces. I like British and Canadian audiences. They share my sense of antiAmericanism. Tribune- It seems you spe­ cifically direct your attacks on an ignorant, Southern hill-billy sort of mentality, yet you yourself are from Georgia and Texas. Are you denying your roots? Hicks- Actually, mostof that material comes from experiences I’ve had in the North. I guess I just bought into a stereotype and it was a cheap shot to attribute it to Southernness. Tribune- You like to criti­ cize Reagan and Bush, how do you feel about Clinton? Hicks- They’re all the same. I mean in America there’s one party, the Business Party. All they’re out for is to maximize profit. They’re

the enemy, not my audience. I mean, what’s Clinton gonna do? If he brings in a bunch of p.c. scumbags, litle fascists, it’ll just get worse. As far as I’m concerned there’s never any hope as long as people are involved. That sounds harsh - 1 mean the only difference there is between human beings and life forms in other galaxies is that they’re more evolved because they don’t use money. T ribune- You’ve worked with several media, which is your favorite? Hicks-I never come across the way I want to on T.V. I really like studio work. With an album you can work ‘til every thing’s right, then open yourself up for attack. T rib u n e - W hat are you working on right now? Hicks- I’m doing a concept album called Arizona Bav. Ari­ zona Bay’s gonna be what’s left when L.A. falls into the ocean after an earthquake. It’s an album about hope for the future. It’s got a show we taped live in Austin, Texas, plus this kind of jazzy guitar sound I’ve been working on for years. I talk about stuff like the L.A. riotshard-hitting, but with this wistful, dreaming music in the background. I wanted to do comedy that al­ lowed people to leave with some­ thing to hum to. Tribune- Sounds like your leaving the typical stand-up rou­ tine- sex, drugs, women, airportsfor something new. Is there pres­ sure to conform to those topics until you’ve gotten your break? Hicks-1 never really thought about it that way. I guess I could have done this earlier, but I wasn’t feeling the urge to do it. Comedi­ ans j ust deal with issues people can relate to, that’s why there’s some common territory. Bill Hicks will be appearing this Friday and Saturday nights, January 15-16, at Club Soda, 5240 Park Ave. Doors open at 7:00 for the 8:00 shows. Tickets are on sale for $15.50 at the Box Office (2707848) and Admission Outlets (7901245).

Malle responsible for Hart&#39;s Damage BY K A TE G IB B S

In movie history 1992 will be remembered as the &quot;Year of the F atal F em m e” . R oseanna Arquette’s naughty nanny “reined” at the box office until dethroned by Sharon Stone’s portrayal of a knickerless novelist. In the name of vengeance, an aerobicizcd “psycha” could kill a cheating boyfriend vith a precise stiletto faster than he could scream, “Run to the hills, it’s Crazy Hcddy”. Thankfully, French director Louis Male (Au Revoir les En­ fants) has forgiven the general popul us the bad taste demonstrated last year and deemed adult movie­ goers mature enough to view his latest film Damage. True to the plot of Josephine Hart’s best-selling novel of the same title, Damage tells the story of a man whose obsessive love for his son’s fiancee ultimately jeop­ ardizes his public and private lives. British govemmentminister, Dr. Stephen Fleming (Jeremy Irons) meets Anna Barton by chance at a party. Their initial wordless connection is bound to be the most televised clip of the film. It is not only an exhilerating indi­ cation of the magnatism but it is the only piece of film which features the two principles alone in a situa­ tion suitable for younger viewers. The narrative bowls along and in only a matter of movie minutes until son, Martyn (Rupert Graves), a journalist, bring Anna home for . dinner. Malle’s even direction al­ lows all participants-including the audience- in this ever-uncom fortable meeting the faimessof first impression. Credibly, Anna ap­ pears as bewitching to Dr. Fleming as she does untrustworthy to his wife (Miranda Richardson) despite familiar protestations by Martyn, “she’s different when we ’re alone”.

Indeed once Anna has initi­ ated a rendcz-vous with Stephen, the nature of which is never second guessed, she proves just how dif­ ferent she can be. Folio wing explict exposure in films such as The Un­ bearable Lightness o f Being, the physicality of Mile. Binoche’srole is intense but not surprising. Re­ moving all evidence of British stiff upper lip with his clothes, Irons however performas as few have seen him do before. The violence of clandestine union dramatises the urgency and sickness of their ob­ sessive love affair. The love scenes in Damage prove that it is impos­ sible to yam on the floor without paying cinematic homage to Last Tango in Paris. Shortly after Martyn is pro­ moted to deputy political editor, he and Anna announce their engage­ ment. Consequently the son is re­ sponsible for reporting the activi­ ties of his father to the public. Con­ flicts of interest seem tragically unavoidabe and raise Damage far above many sex melodramas. Connections between char­ acters lie at the film’s core and images of character fill the screen. The film ’s attem pt to explain Anna’s character is however its only failing. Having once been the object of doomed desire, Anna is convinced she will never love without loss. David Hare’s heavyhanded script demands Anna warn Stephen, “damaged people are dangerous”. Anna’s impossibly luxurious lifestyle and strange No Man’s Land accent are explained awa as resulting from an interna­ tional, itinerant childhood. Acute performances from the cast, par­ ticularly from Miranda Richardson over come the script and keep the story compelling. Damage opens in Montreal next week and rates a 6 out of 8% Nonoxynol 9.

♦New Management* Dr.Pentfield at Stanley Under the awning across from the faculty of law , 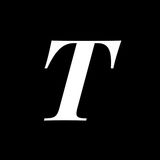