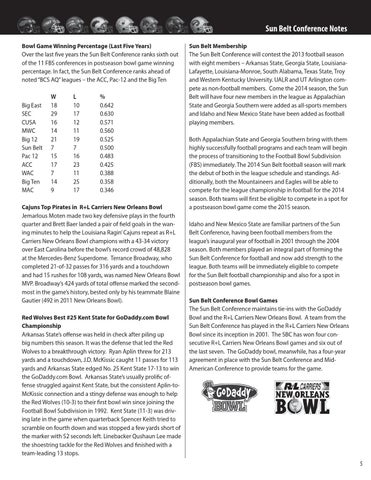 Cajuns Top Pirates in R+L Carriers New Orleans Bowl Jemarlous Moten made two key defensive plays in the fourth quarter and Brett Baer landed a pair of field goals in the waning minutes to help the Louisiana Ragin’ Cajuns repeat as R+L Carriers New Orleans Bowl champions with a 43-34 victory over East Carolina before the bowl’s record crowd of 48,828 at the Mercedes-Benz Superdome. Terrance Broadway, who completed 21-of-32 passes for 316 yards and a touchdown and had 15 rushes for 108 yards, was named New Orleans Bowl MVP. Broadway’s 424 yards of total offense marked the secondmost in the game’s history, bested only by his teammate Blaine Gautier (492 in 2011 New Orleans Bowl). Red Wolves Best #25 Kent State for GoDaddy.com Bowl Championship Arkansas State’s offense was held in check after piling up big numbers this season. It was the defense that led the Red Wolves to a breakthrough victory. Ryan Aplin threw for 213 yards and a touchdown, J.D. McKissic caught 11 passes for 113 yards and Arkansas State edged No. 25 Kent State 17-13 to win the GoDaddy.com Bowl. Arkansas State’s usually prolific offense struggled against Kent State, but the consistent Aplin-toMcKissic connection and a stingy defense was enough to help the Red Wolves (10-3) to their first bowl win since joining the Football Bowl Subdivision in 1992. Kent State (11-3) was driving late in the game when quarterback Spencer Keith tried to scramble on fourth down and was stopped a few yards short of the marker with 52 seconds left. Linebacker Qushaun Lee made the shoestring tackle for the Red Wolves and finished with a team-leading 13 stops.