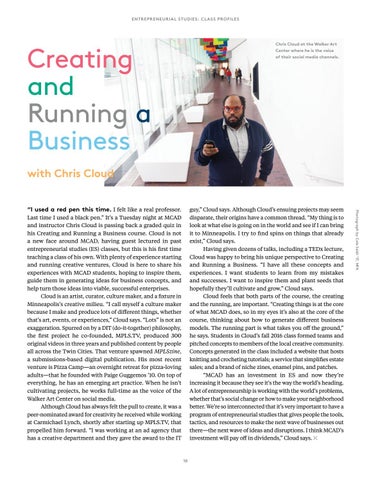 Chris Cloud at the Walker Art Center where he is the voice of their social media channels.

Creating and Running a Business with Chris Cloud

guy,” Cloud says. Although Cloud’s ensuing projects may seem disparate, their origins have a common thread. “My thing is to look at what else is going on in the world and see if I can bring it to Minneapolis. I try to find spins on things that already exist,” Cloud says. Having given dozens of talks, including a TEDx lecture, Cloud was happy to bring his unique perspective to Creating and Running a Business. “I have all these concepts and experiences. I want students to learn from my mistakes and successes. I want to inspire them and plant seeds that hopefully they’ll cultivate and grow,” Cloud says. Cloud feels that both parts of the course, the creating and the running, are important. “Creating things is at the core of what MCAD does, so in my eyes it’s also at the core of the course, thinking about how to generate different business models. The running part is what takes you off the ground,” he says. Students in Cloud’s fall 2016 class formed teams and pitched concepts to members of the local creative community. Concepts generated in the class included a website that hosts knitting and crocheting tutorials; a service that simplifies estate sales; and a brand of niche zines, enamel pins, and patches. “MCAD has an investment in ES and now they’re increasing it because they see it's the way the world’s heading. A lot of entrepreneurship is working with the world’s problems, whether that’s social change or how to make your neighborhood better. We’re so interconnected that it’s very important to have a program of entrepreneurial studies that gives people the tools, tactics, and resources to make the next wave of businesses out there—the next wave of ideas and disruptions. I think MCAD’s investment will pay off in dividends,” Cloud says. �

Last time I used a black pen.” It’s a Tuesday night at MCAD and instructor Chris Cloud is passing back a graded quiz in his Creating and Running a Business course. Cloud is not a new face around MCAD, having guest lectured in past entrepreneurial studies (ES) classes, but this is his first time teaching a class of his own. With plenty of experience starting and running creative ventures, Cloud is here to share his experiences with MCAD students, hoping to inspire them, guide them in generating ideas for business concepts, and help turn those ideas into viable, successful enterprises. Cloud is an artist, curator, culture maker, and a fixture in Minneapolis’s creative milieu. “I call myself a culture maker because I make and produce lots of different things, whether that’s art, events, or experiences,” Cloud says. “Lots” is not an exaggeration. Spurred on by a DIT (do-it-together) philosophy, the first project he co-founded, MPLS.TV, produced 300 original videos in three years and published content by people all across the Twin Cities. That venture spawned MPLSzine, a submissions-based digital publication. His most recent venture is Pizza Camp—an overnight retreat for pizza-loving adults—that he founded with Paige Guggemos ’10. On top of everything, he has an emerging art practice. When he isn't cultivating projects, he works full-time as the voice of the Walker Art Center on social media. Although Cloud has always felt the pull to create, it was a peer-nominated award for creativity he received while working at Carmichael Lynch, shortly after starting up MPLS.TV, that propelled him forward. “I was working at an ad agency that has a creative department and they gave the award to the IT

“I used a red pen this time. I felt like a real professor. Minneapolis College of Art and Design

NEXT: The Magazine of the Minneapolis College of Art Design

NEXT: The Magazine of the Minneapolis College of Art Design