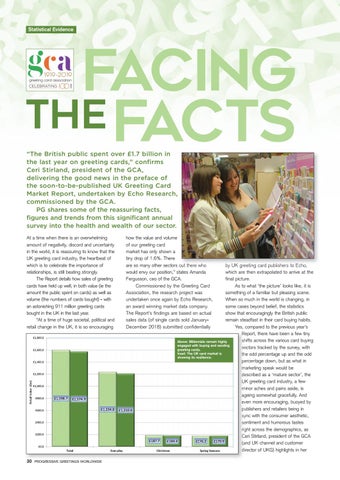 Facing The Facts “The British public spent over £1.7 billion in the last year on greeting cards,” confirms Ceri Stirland, president of the GCA, delivering the good news in the preface of the soon-to-be-published UK Greeting Card Market Report, undertaken by Echo Research, commissioned by the GCA. PG shares some of the reassuring facts, figures and trends from this significant annual survey into the health and wealth of our sector. At a time when there is an overwhelming amount of negativity, discord and uncertainty in the world, it is reassuring to know that the UK greeting card industry, the heartbeat of which is to celebrate the importance of relationships, is still beating strongly. The Report details how sales of greeting cards have held up well, in both value (ie the amount the public spent on cards) as well as volume (the numbers of cards bought) - with an astonishing 911 million greeting cards bought in the UK in the last year. “At a time of huge societal, political and retail change in the UK, it is so encouraging

how the value and volume of our greeting card market has only shown a tiny drop of 1.6%. There are so many other sectors out there who would envy our position,” states Amanda Fergusson, ceo of the GCA. Commissioned by the Greeting Card Association, the research project was undertaken once again by Echo Research, an award winning market data company. The Report’s findings are based on actual sales data (of single cards sold JanuaryDecember 2018) submitted confidentially

by UK greeting card publishers to Echo, which are then extrapolated to arrive at the final picture. As to what ‘the picture’ looks like, it is something of a familiar but pleasing scene. When so much in the world is changing, in some cases beyond belief, the statistics show that encouragingly the British public remain steadfast in their card buying habits. Yes, compared to the previous year’s Report, there have been a few tiny shifts across the various card buying Above: Millennials remain highly engaged with buying and sending sectors tracked by the survey, with greeting cards. Inset: The UK card market is the odd percentage up and the odd showing its resilience. percentage down, but as what in marketing speak would be described as a ‘mature sector’, the UK greeting card industry, a few minor aches and pains aside, is ageing somewhat gracefully. And even more encouraging, buoyed by publishers and retailers being in sync with the consumer aesthetic, sentiment and humorous tastes right across the demographics, as Ceri Stirland, president of the GCA (and UK channel and customer director of UKG) highlights in her