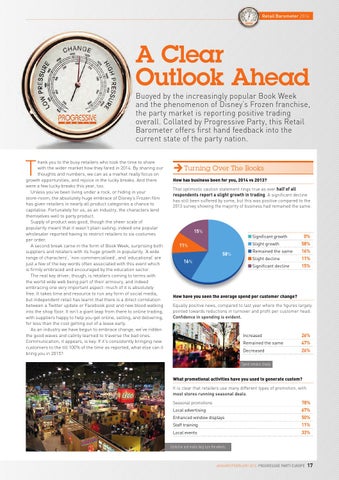 A Clear Outlook Ahead

Buoyed by the increasingly popular Book Week and the phenomenon of Disney’s Frozen franchise, the party market is reporting positive trading overall. Collated by Progressive Party, this Retail Barometer offers first hand feedback into the current state of the party nation.

hank you to the busy retailers who took the time to share with the wider market how they fared in 2014. By sharing our thoughts and numbers, we can as a market really focus on growth opportunities, and rejoice in the lucky breaks. And there were a few lucky breaks this year, too. Unless you’ve been living under a rock, or hiding in your store-room, the absolutely huge embrace of Disney’s Frozen film has given retailers in nearly all product categories a chance to capitalise. Fortunately for us, as an industry, the characters lend themselves well to party product. Supply of product was good, though the sheer scale of popularity meant that it wasn’t plain sailing; indeed one popular wholesaler reported having to restrict retailers to six costumes per order. A second break came in the form of Book Week, surprising both suppliers and retailers with its huge growth in popularity. ‘A wide range of characters’, ‘non-commercialised’, and ‘educational’ are just a few of the key words often associated with this event which is firmly embraced and encouraged by the education sector. The real key driver, though, is retailers coming to terms with the world wide web being part of their armoury, and indeed embracing one very important aspect: much of it is absolutely free. It takes time and resource to run any form of social media, but independent retail has learnt that there is a direct correlation between a Twitter update or Facebook post and new blood walking into the shop floor. It isn’t a giant leap from there to online trading, with suppliers happy to help you get online, selling, and delivering, for less than the cost getting out of a lease early. As an industry we have begun to embrace change, we’ve ridden the good waves and calmly learned to traverse the bad ones. Communication, it appears, is key. If it’s consistently bringing new customers to the till 100% of the time as reported, what else can it bring you in 2015?

Turning Over The Books How has business been for you, 2014 vs 2013? That optimistic caution statement rings true as over half of all respondents report a slight growth in trading. A significant decline has still been suffered by some, but this was positive compared to the 2013 survey showing the majority of business had remained the same.

How have you seen the average spend per customer change? Equally positive news, compared to last year where the figures largely pointed towards reductions in turnover and profit per customer head. Confidence in spending is evident.

Spend remains steady. What promotional activities have you used to generate custom? It is clear that retailers use many different types of promotion, with most stores running seasonal deals. Seasonal promotions