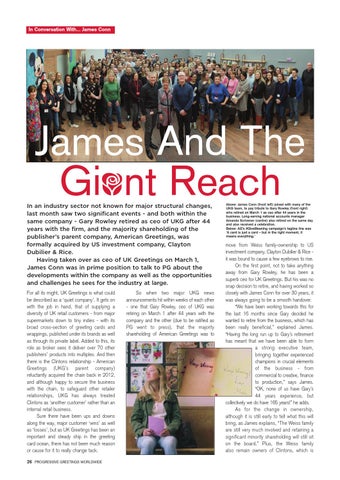 In Conversation With... James Conn

James And The Gi nt Reach

In an industry sector not known for major structural changes, last month saw two significant events - and both within the same company - Gary Rowley retired as ceo of UKG after 44 years with the firm, and the majority shareholding of the publisher’s parent company, American Greetings, was formally acquired by US investment company, Clayton Dubilier &amp; Rice. Having taken over as ceo of UK Greetings on March 1, James Conn was in prime position to talk to PG about the developments within the company as well as the opportunities and challenges he sees for the industry at large. For all its might, UK Greetings is what could be described as a ‘quiet company’. It gets on with the job in hand, that of supplying a diversity of UK retail customers - from major supermarkets down to tiny indies - with its broad cross-section of greeting cards and wrappings, published under its brands as well as through its private label. Added to this, its role as broker sees it deliver over 70 other publishers’ products into multiples. And then there is the Clintons relationship - American Greetings (UKG’s parent company) reluctantly acquired the chain back in 2012, and although happy to secure the business with the chain, to safeguard other retailer relationships, UKG has always treated Clintons as ‘another customer’ rather than an internal retail business. Sure there have been ups and downs along the way, major customer ‘wins’ as well as ‘losses’, but as UK Greetings has been an important and steady ship in the greeting card ocean, there has not been much reason or cause for it to really change tack. 26

So when two major UKG news announcements hit within weeks of each other - one that Gary Rowley, ceo of UKG was retiring on March 1 after 44 years with the company and the other (due to be ratified as PG went to press), that the majority shareholding of American Greetings was to

Above: James Conn (front left) joined with many of the UKG team, to pay tribute to Gary Rowley (front right) who retired on March 1 as ceo after 44 years in the business. Long-serving national accounts manager Amanda Scrivener (centre) also retired on the same day and also received a celebration. Below: AG’s #GiveMeaning campaign’s tagline line was ‘A card is just a card – but in the right moment, it means everything.’

move from Weiss family-ownership to US investment company, Clayton Dubilier &amp; Rice it was bound to cause a few eyebrows to rise. On the first point, not to take anything away from Gary Rowley, he has been a superb ceo for UK Greetings. But his was no snap decision to retire, and having worked so closely with James Conn for over 30 years, it was always going to be a smooth handover. “We have been working towards this for the last 16 months since Gary decided he wanted to retire from the business, which has been really beneficial,” explained James. “Having the long run up to Gary’s retirement has meant that we have been able to form a strong executive team, bringing together experienced champions in crucial elements of the business - from commercial to creative, finance to production,” says James. “OK, none of us have Gary’s 44 years experience, but collectively we do have 165 years!” he adds. As for the change in ownership, although it is still early to tell what this will bring, as James explains, “The Weiss family are still very much involved and retaining a significant minority shareholding will still sit on the board.” Plus, the Weiss family also remain owners of Clintons, which is 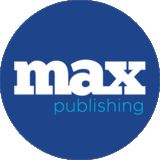