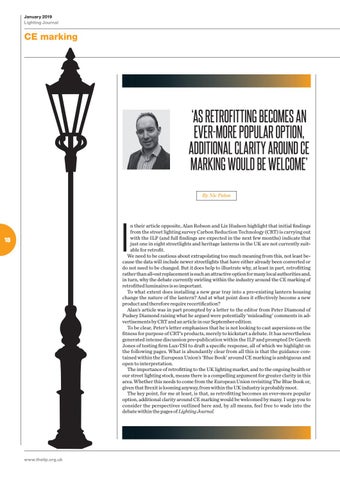 ‘AS RETROFITTING BECOMES AN EVER-MORE POPULAR OPTION, ADDITIONAL CLARITY AROUND CE MARKING WOULD BE WELCOME’ By Nic Paton

n their article opposite, Alan Robson and Liz Hudson highlight that initial findings from the street lighting survey Carbon Reduction Technology (CRT) is carrying out with the ILP (and full findings are expected in the next few months) indicate that just one in eight streetlights and heritage lanterns in the UK are not currently suitable for retrofit. We need to be cautious about extrapolating too much meaning from this, not least because the data will include newer streetlights that have either already been converted or do not need to be changed. But it does help to illustrate why, at least in part, retrofitting rather than all-out replacement is such an attractive option for many local authorities and, in turn, why the debate currently swirling within the industry around the CE marking of retrofitted luminaires is so important. To what extent does installing a new gear tray into a pre-existing lantern housing change the nature of the lantern? And at what point does it effectively become a new product and therefore require recertification? Alan’s article was in part prompted by a letter to the editor from Peter Diamond of Pudsey Diamond raising what he argued were potentially ‘misleading’ comments in advertisements by CRT and an article in our September edition. To be clear, Peter’s letter emphasises that he is not looking to cast aspersions on the fitness for purpose of CRT’s products, merely to kickstart a debate. It has nevertheless generated intense discussion pre-publication within the ILP and prompted Dr Gareth Jones of testing firm Lux-TSI to draft a specific response, all of which we highlight on the following pages. What is abundantly clear from all this is that the guidance contained within the European Union’s ‘Blue Book’ around CE marking is ambiguous and open to interpretation. The importance of retrofitting to the UK lighting market, and to the ongoing health or our street lighting stock, means there is a compelling argument for greater clarity in this area. Whether this needs to come from the European Union revisiting The Blue Book or, given that Brexit is looming anyway, from within the UK industry is probably moot. The key point, for me at least, is that, as retrofitting becomes an ever-more popular option, additional clarity around CE marking would be welcomed by many. I urge you to consider the perspectives outlined here and, by all means, feel free to wade into the debate within the pages of Lighting Journal. 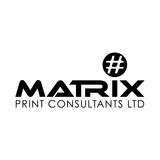