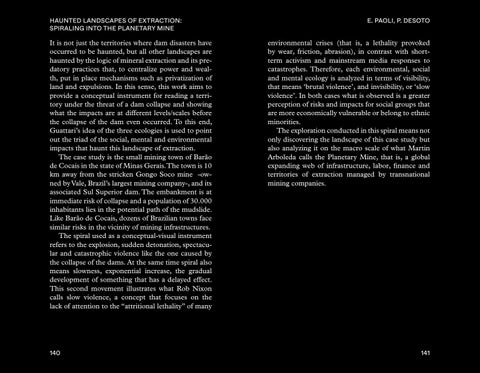 HAUNTED LANDSCAPES OF EXTRACTION: SPIRALING INTO THE PLANETARY MINE

It is not just the territories where dam disasters have occurred to be haunted, but all other landscapes are haunted by the logic of mineral extraction and its predatory practices that, to centralize power and wealth, put in place mechanisms such as privatization of land and expulsions. In this sense, this work aims to provide a conceptual instrument for reading a territory under the threat of a dam collapse and showing what the impacts are at different levels/scales before the collapse of the dam even occurred. To this end, Guattari’s idea of the three ecologies is used to point out the triad of the social, mental and environmental impacts that haunt this landscape of extraction. The case study is the small mining town of Barão de Cocais in the state of Minas Gerais. The town is 10 km away from the stricken Gongo Soco mine -owned by Vale, Brazil’s largest mining company-, and its associated Sul Superior dam. The embankment is at immediate risk of collapse and a population of 30.000 inhabitants lies in the potential path of the mudslide. Like Barão de Cocais, dozens of Brazilian towns face similar risks in the vicinity of mining infrastructures. The spiral used as a conceptual-visual instrument refers to the explosion, sudden detonation, spectacular and catastrophic violence like the one caused by the collapse of the dams. At the same time spiral also means slowness, exponential increase, the gradual development of something that has a delayed effect. This second movement illustrates what Rob Nixon calls slow violence, a concept that focuses on the lack of attention to the “attritional lethality” of many

environmental crises (that is, a lethality provoked by wear, friction, abrasion), in contrast with shortterm activism and mainstream media responses to catastrophes. Therefore, each environmental, social and mental ecology is analyzed in terms of visibility, that means ‘brutal violence’, and invisibility, or ‘slow violence’. In both cases what is observed is a greater perception of risks and impacts for social groups that are more economically vulnerable or belong to ethnic minorities. The exploration conducted in this spiral means not only discovering the landscape of this case study but also analyzing it on the macro scale of what Martin Arboleda calls the Planetary Mine, that is, a global expanding web of infrastructure, labor, finance and territories of extraction managed by transnational mining companies. 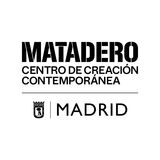