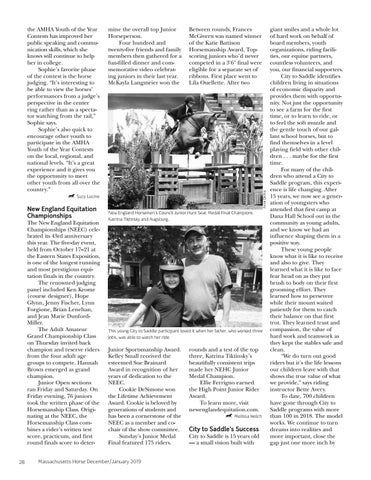 the AMHA Youth of the Year Contests has improved her public speaking and communication skills, which she knows will continue to help her in college. Sophie’s favorite phase of the contest is the horse judging. “It’s interesting to be able to view the horses’ performances from a judge’s perspective in the center ring rather than as a spectator watching from the rail,” Sophie says. Sophie’s also quick to encourage other youth to participate in the AMHA Youth of the Year Contests on the local, regional, and national levels. “It’s a great experience and it gives you the opportunity to meet other youth from all over the country.”

mine the overall top Junior Horseperson. Four hundred and twenty-five friends and family members then gathered for a fun-filled dinner and commemorative video celebrating juniors in their last year. McKayla Langmeier won the

Between rounds, Frances McGivern was named winner of the Katie Battison Horsemanship Award. Topscoring juniors who’d never competed in a 3&#39;6&quot; final were eligible for a separate set of ribbons. First place went to Lila Ouellette. After two

This young City to Saddle participant loved it when her father, who worked three jobs, was able to watch her ride.

Junior Sportsmanship Award. Kelley Small received the esteemed Sue Brainard Award in recognition of her years of dedication to the NEEC. Cookie DeSimone won the Lifetime Achievement Award. Cookie is beloved by generations of students and has been a cornerstone of the NEEC as a member and cochair of the show committee. Sunday’s Junior Medal Final featured 175 riders.

giant smiles and a whole lot of hard work on behalf of board members, youth organizations, riding facilities, our equine partners, countless volunteers, and you, our financial supporters. City to Saddle identifies children living in situations of economic disparity and provides them with opportunity. Not just the opportunity to see a farm for the first time, or to learn to ride, or to feel the soft muzzle and the gentle touch of our gallant school horses, but to find themselves in a level playing field with other children . . . maybe for the first time. For many of the children who attend a City to Saddle program, this experience is life changing. After 15 years, we now see a generation of youngsters who attended that first camp at Dana Hall School out in the community as young adults, and we know we had an influence shaping them in a positive way. These young people know what it is like to receive and also to give. They learned what it is like to face fear head on as they put brush to body on their first grooming effort. They learned how to persevere while their mount waited patiently for them to catch their balance on that first trot. They learned trust and compassion, the value of hard work and teamwork as they kept the stables safe and clean. “We do turn out good riders but it’s the life lessons our children leave with that shows the true value of what we provide,” says riding instructor Bette Avery. To date, 700 children have gone through City to Saddle programs with more than 100 in 2018. The model works. We continue to turn dreams into realities and more important, close the gap just one more inch by 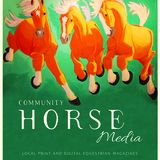