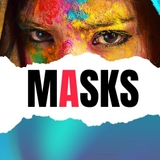 from MASKS Literary Magazine
by maskslitmag ...when it comes to wild animals—whether it’s the zoo, or the damn lizards in Biology class—I do not do that. Period. And this coyote was goin’ on like it had something to prove.

Note: The following account was ascertained in an effort to support the Federal Trade Commission’s ongoing investigation into any and all connections between the Atlanta-based AfterVida Nutrition Company, a bonafide multi-level network marketing company (i.e. “MLM”), and criminal activities. These include false advertising, conspiracy, money laundering, grand theft auto, assault, and murder.

We have assembled the following transcripts in their standing order and redacted the comments of the interviewer to isolate the speaker and attempt to give some semblance of organization to what was otherwise a vexing, scattered, and altogether incoherent conversation.

NS ... I hope this iddn’t prodding too much, Miss Detective, but lemme ask you, have you ever had a falling out with a friend before?

NS I don’t wanna make it sound all dramatic or whatever. I’m just curious.

NS Well, here’s the way I see it. I think people break apart like continents. You ever learn about continents? Like back in high school—“Teutonic Plates” [sic] and all that? That’s my take. You know, like, here’s y’all, thick as fleas; you’re rock-solid friends, like two mountains, side by side. But, some time passes, things change, and the two of you start driftin’ apart; and eventually, you’re sittin’ in South America and his ass is way over there in Africa. And here’s you, wondering, “When did things end? when did we even split apart?” Because once you’ve drifted far enough from someone, you can’t remember if it took one month, one million fuckin’ years; all you know is he’s there, and you’re here, and you got an ocean of hate between you two, and you wanna rip his fuckin’ head off for making you feel old enough to lose the whole timeline of the rivalry.

NS Yeah, I can tell you about when he and I split up. I guess it started when he decided to drop out of school. I remember the night he made up his mind.

It was a Thursday, the first week back in January our junior year. We'd made it through syllabus week, and since neither of us had class on Fridays, and workouts were a ways off, we decided to take a couple'a edibles that D-'s sister had brought home for Christmas and go out on a nice midnight stroll through the frigid, fifty-five-degree Georgia winter.

NS [laughs] The edibles? What, are you gonna call my mom? They were gummies. The kind you buy at a dispensary. So don’t bother tryna charge me, okay?

Anyway; so we got our hoodies on, right; and we’re creepin’ around the dark campus, just us, all alone. Like we’re at the bottom of the ocean or some shit— nobody else around, no life whatsoever. And after a bit of wandering, we found a set of abandoned rail lines behind the old dilapidated print shop next to the art building. And we sorta look at each other and shrug and start walkin’ a studious single-file, arms out wide, trying to match our steps with the wooden ties.

“Am I supposed to feel this yet?” I asked, sorta impatient.

And D— turns around over his shoulder like he’s gonna answer, ‘cept all he does is give me this wild-eyed look, and shouts, “Utah’s finest!” all smooth, like one of those fuckin’ Somalians [sic] or whatever you call those fancy wine people.

“Why’d your sister move out there again?” I asked. All around us were the backs of the buildings. We were looking at dumpsters and loading docks.

“Some teaching program.” D— said, marching on, not lookin’ back. “They sent her to go work at a school for troubled youth.”

“What the fuck are people troubled about in Utah?”

“Yeah, it happens everywhere,” D— goes, all sure of himself. “Happened in Beijing, happened in Rio—hell, even Atlanta; they’ll tear down a whole fuckin’ neighborhood just to build these gaudy stadiums, and then, after the games, nobody can maintain ‘em. There’s pictures; it’s like Mad Max or some shit. People building little tent villages in the drained-out swimming pools, pretending like Michael Phelps never peed in there. Maybe my sister works in one of those; maybe she’s got a little cluster of street urchins, sitting ‘round a fire, reading bedtime stories beside the diving board.”

“It was the winter Olympics, dipshit. And besides, they don’t build stadiums for that.”

“What, do you think they built a whole goddamn mountain in the middle of downtown Salt Lake City? Just so those fuckin’ Swedish cheerleaders can come skiing by in their Power Ranger sweats? Doing their fuckin’ backflips? No, D—, it duddn’t work like that.”

And so we keep goin’, single-file. And we pass dumpsterville; pass the hazard waste disposal from the medical school; and we start going through the science campus, where all the buildings are these rigid glass trapezoids, hangin’ over the steep hillsides like fuckin’ Elon Monks [sic] lives there or some shit. And we keep walking; and eventually the ground drops around us, and it’s just us on the railroad, with cars driving on the road, way down below. I start gettin' scared, thinkin’ I might fall. And outta nowhere we make a turn, and the football stadium’s looming over us, like this big fuckin’ somber monolith, endless towering concrete. But I don’t look up at it; I just keep puttin’ one foot in front of the other, watchin’ my steps, watchin’ the cars keep goin’ by, way down the steep embankment.

And so by the time the high really kicks in; by the time I’m riding that mean steely breeze—kinda gigglin’ to myself—the rail lines have deposited us at a cemetery. And so we go through the muddy Georgia clay up to the iron gates. And wouldn’t you know it? It iddn’t even locked.

We step on through and start wandering around in the pale moonlight, like a couple’a grave robbers lookin’ for dishonest work. We ditch the path and make our way onto the grass, passed the ivy-veined mausoleums and the jagged old tombstones, stickin’ up outta the ground like bad teeth.

And, you know, with it bein’ a Civil War cemetery and all, I decide that I gotta do my civic duty and bring that place into the modern era. So I drop my drawers and relieve myself on some old-ass grave, hummin’ the national anthem, smiling like it’s General Lee Harvey Oswald [sic] himself that I’m peeing on, like I’m makin’ a difference.

D—’s got his back to me as I’m pissing. And, kinda out of nowhere, he says, “But school—man, it’s fucked. You ever actually sit down and think about it? Like why we’re here?”

“You mean during tutoring?” I say, zipping myself up. I turn and he’s got his arms folded, looking off, with his mouth twisted into a knot.

“Nah, man” he sighs. “I’m talkin’ about the bigger picture. Like why we’re here in the first place.”

I put my arm around him, all chummy like, my eyes big red rubies from the weed gummies. We cast two long shadows in the moonlight. “We’re ‘ball players, D—.” I say, ruffling his hair like a dog. “School iddn’t even in the picture. Hell, just gimme tests and lemme crack some skulls, brother.”

And he goes “No, Nick, I’m serious. Like, in this country, in general.” He made a big sweeping gesture toward the sky. And then he sorta folded into himself, getting all quiet. “I didn’t tell you ’bout this yet, but over break, I went to this meeting.”

“Kinda like a job interview. This guy reached out to me online; Heath was his name. He said I looked ‘hungry,’ and that he knew my name from football.”

D— ignored me. “It’s sorta like sales, ‘cept you get to set your own hours and stuff. They sell energy drinks. But it’s, like, more than that.” We started walking again. Strolling around among the dead. “He was talking about all this stuff; like how in America, when we’re in high school, we’re getting' taught by some crusty old lady makin’ thirty grand a year.”

“And then,” he said “if you’re smart, you go to college—where you’re expected to learn from some equally crusty motherfuckers making sixty grand a year. Sixty.” He repeated it like he was tryna make a point. “Iddn’t that fucked up?”

“Bet your sister duddn’t think so.” I said. We were walking toward a terraced hillside rising up in the distance, with a ribbon of stone pathway going around it, and this great stooping willow at the top like a crown. It looked like the backside of a state quarter.

And D— goes “I mean, what the fuck can someone making sixty grand tell me about making money? Huh? You ever think about that? I wanna to learn from millionaires. I wanna learn how to create wealth. Where was that lesson? How to create a ‘passive income;’ do you know this term, Nick? ‘Passive income?’” He said the phrase like he’d borrowed it for a test drive. “See, in America, they try to tell us that the whole secret to success is making money. That’s bullshit. It’s about creating wealth. There’s a difference.”

And I thought he was getting ready to say something else, maybe something important; but he stopped. His face went urgent, eyes wide and still, like he’d seen something. And so I turn around, and try to follow his gaze; and there, off in the distance—past the hill, through a little band of mist—I see this fuckin’ ravenous, red coyote, gnawin’ and chewin’ at something. It’s rolling around, shifting between the headstones, the color of old rust or paprika.

NS Listen, there is some shit I just do not fuck with.

I grab D— by the sleeve and make like I’m gonna bolt. But D— just shakes me off, and he gets down on his hands and knees and starts crawling toward it. You know, all prone and whatnot. Like he’s Steve Irwin goin’ in for the close-up.

NS Look. You can call me cautious or chickenshit or whatever; you can say what you want about me, Miss Detective, but when it comes to wild animals—whether it’s the zoo, or the damn lizards in Biology class—I do not do that. Period. And this coyote was goin’ on like it had something to prove.

I got my ass outta there. Ran back home on those rail lines—passed the stadium, passed the campus and the dumpsters. Like I was fuckin’ Ichabod Crane, dodging through the woods. I wasn’t about to get eaten by some fuckin’ mangey dog.

But D— had other thoughts.

He told me this later on that night, back at the dorm, while filling up a glass of water at the sink.

D— crawled toward it through the wet grass, taking cover behind the graves. He went to the top of that hill, up to the willow tree, peeking through the leaves like he was behind a curtain. And up there, from that perspective, ‘bout ten feet or so from the damn thing, he can see that what she’s eatin’ and tearin’ apart— what she’s jerking around—is the limp body of another coyote. A brother, a sister; maybe a friend. Who knows. Just rippin’ flesh off the bone, like it wuddn’t a fuckin’ problem.

“Guess she was hungry,” D— said, taking a long sip of water.

I nodded from the futon.