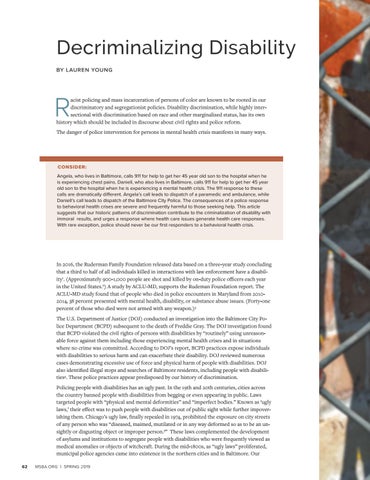 acist policing and mass incarceration of persons of color are known to be rooted in our discriminatory and segregationist policies. Disability discrimination, while highly intersectional with discrimination based on race and other marginalized status, has its own history which should be included in discourse about civil rights and police reform. The danger of police intervention for persons in mental health crisis manifests in many ways.

In 2016, the Ruderman Family Foundation released data based on a three-year study concluding that a third to half of all individuals killed in interactions with law enforcement have a disability1. (Approximately 900-1,000 people are shot and killed by on-duty police officers each year in the United States.2) A study by ACLU-MD, supports the Rudeman Foundation report. The ACLU-MD study found that of people who died in police encounters in Maryland from 20102014, 38 percent presented with mental health, disability, or substance abuse issues. (Forty-one percent of those who died were not armed with any weapon.)3 The U.S. Department of Justice (DOJ) conducted an investigation into the Baltimore City Police Department (BCPD) subsequent to the death of Freddie Gray. The DOJ investigation found that BCPD violated the civil rights of persons with disabilities by “routinely” using unreasonable force against them including those experiencing mental health crises and in situations where no crime was committed. According to DOJ’s report, BCPD practices expose individuals with disabilities to serious harm and can exacerbate their disability. DOJ reviewed numerous cases demonstrating excessive use of force and physical harm of people with disabilities. DOJ also identified illegal stops and searches of Baltimore residents, including people with disabilities4. These police practices appear predisposed by our history of discrimination. Policing people with disabilities has an ugly past. In the 19th and 20th centuries, cities across the country banned people with disabilities from begging or even appearing in public. Laws targeted people with “physical and mental deformities” and “imperfect bodies.” Known as ‘ugly laws,’ their effect was to push people with disabilities out of public sight while further impoverishing them. Chicago’s ugly law, finally repealed in 1974, prohibited the exposure on city streets of any person who was “diseased, maimed, mutilated or in any way deformed so as to be an unsightly or disgusting object or improper person.5” These laws complemented the development of asylums and institutions to segregate people with disabilities who were frequently viewed as medical anomalies or objects of witchcraft. During the mid-1800s, as “ugly laws” proliferated, municipal police agencies came into existence in the northern cities and in Baltimore. Our 62 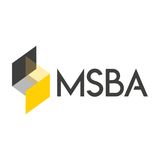