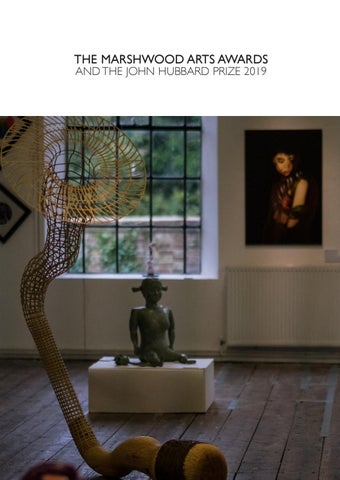 THE MARSHWOOD ARTS AWARDS AND THE JOHN HUBBARD PRIZE 2019

THE MARSHWOOD ARTS AWARDS AND THE JOHN HUBBARD PRIZE 2019

Exhibition at Bridport Arts Centre Saturday 9 November - Saturday 7 December 2019 The Marshwood Arts Awards, first launched in 2008, were initially motivated by an appreciation of the extraordinary talent and quality of work being produced by artists, designers and makers in the South West. For this reason the Marshwood Vale Magazine decided to create an on-going opportunity for artists involved in a range of media to show their work in a mixed exhibition. This initiative, and the subsequent five exhibitions, have provided opportunities for artists to have their work chosen by their peers: five experienced artists in their particular field who are committed to supporting, promoting and encouraging the arts. The reputation of both the quality of the selectors and the resulting exhibitions has since created interest from all over the country and entries are now received from as far afield as Australia, the USA and Asia, building on the initial South West roots. This year, artists and makers were invited to submit work in four categories: Painting &amp; Drawing; Sculpture; Photography &amp; Digital Media and Applied Arts. The work was presented anonymously to the selectors who chose three exhibitors from each category, and nine from Applied Arts. The selectors have also included a ‘Highly Commended’ category adding a further 14 exhibitors. A total of 32 artists have been invited to join the selectors in this showcase exhibition. There are cash prizes for the final winner of each category although it is important to stress that everyone selected is a winner. The John Hubbard Memorial Prize, added in 2017 in appreciation of the support and encouragement given by the late contemporary artist John Hubbard, is presented to one of the artists showing in this exhibition. The chosen artist receives a cash prize, donated by the Hubbard family The Collectors Prizes for 2019 are selected by: Sybil King of the Fine Foundation and Jasper Conran OBE The 2019 Exhibition was selected by: Dave White - Painting &amp; Drawing John Makepeace OBE - Applied Arts Brian Griffin - Photography &amp; Digital Media Kate Malone MBE, - Applied Arts Tania Kovats - Sculpture The Finalists Applied Arts: Lucy Campbell - Sayan Chanda - Nesta Davies - Rachel Doble &amp; Simon Critchley - Laura Dron Björk Haraldsdóttir - Claire Mort - Teddy Salad - Malcolm Seal Painting &amp; Drawing: Jione Choi - Gary Goodman - Lotta Teale Photography &amp; Digital Media: Angela Eames - Cate Field - David Taylor Sculpture: Barbara Ash - John de Pauley - Lotte Scott The Highly Commended Applied Arts: Helena Barrowcliff - Abigail Brown - Alison Brown - Silva da Majo - Mark Morel Painting &amp; Drawing: Claire Chandler - Mike Chapman - Ana Pais Oliveira Photography &amp; Digital Media: Paul Carruthers - Cody Choi - Graham Fink Sculpture: Chris Dunseath - Alexandra Pullen - Rebecca Goddard

The following pages help to illustrate the diverse and inspirational talents of the artists, designers and makers that comprise the Marshwood Arts Awards 2019 exhibition. A total of 32 participants, in disciplines ranging from jewelry to sculpture, have come together in one exhibition, showcasing craftsmanship, flair, creativity and competence in a unique mixed show. Run by The Marshwood Vale Magazine, the show is held at Bridport Arts Centre, a multi-arts venue presenting a year-round programme of visual arts, theatre, dance, comedy, music, spoken word and film. It is a registered charity with less than 20% of its funding coming from Public Investment sources. For more information visit www.bridport-arts. co.uk.

Dave White Painting &amp; Drawing SELECTOR A Fine Arts graduate of the Liverpool John Moores University, Dave White is a contemporary British Artist whoâ&amp;#x20AC;&amp;#x2122;s exhibitions include Shanghai, New York, Rotterdam, Miami and London, with solo exhibitions in London, Copenhagen and Los Angeles. In 2018 he created a hand painted Rhino for Tusk which was installed for a month on New Bond Street in London and auctioned at Christieâ&amp;#x20AC;&amp;#x2122;s alongside works by Harland Miller, Marc Quinn, Gavin Turk and The Chapman Brothers.

Gary Goodman Painting &amp; Drawing Category Winner I am a painter and I write poetry. I have exhibited my paintings and prints and performed my poetry around the world: from the frozen wastes of Norway and Alaska down to the warmth of New Zealand and the Southern States of USA. I teach at various colleges and universities, run workshops in drawing, painting, printmaking and poetry; and I perform my poems live and sometimes record them with a variety of musicians. I look after my ill daughter; and I like animals and thunderstorms and lots of other things that end up in my pictures and writing. garygoodman.wordpress.com

Brian Griffin Photography &amp; Digital Media SELECTOR Guardian Newspaper’s ‘Photographer of the decade’ in 1989 Brian Griffin has also been described as ‘the most unpredictable and influential British portrait photographer of the last decades’ by the British Journal of Photography and was feted as ‘one of Britain’s most influential photographers’ by the World Photography Organisation in 2015. He received a Honorary Doctorate from Birmingham City University and in 2016 was inducted into the Album Cover Hall Of Fame.

Cate Field Photography &amp; Digital Media Category Winner I am a London born artist now living in Dorset. In this series of images, I use multiple layers to create collages that become metaphors for the paradox of urban living, in particular the complexity and simplicity of daily life. The ordinary becomes a narrative where we can create stories. The original photographs were all taken around Waterloo station in London, a place that was very familiar to me, and where I feel a strange resonance. Ordinary people, doing ordinary things become a kaleidoscope of colour. Each person has their own story, and yet all are connected within the labyrinth of the London railway system.

Kate Malone Applied Arts SELECTOR Recently featured as a judge on BBC2â&amp;#x20AC;&amp;#x2122;s The Great Pottery Throw Down Kate Malone is known for creating large, complex sculptural vesselsâ&amp;#x20AC;&amp;#x201D;though her works include everything from egg cups to building facades. Works are now in collections including at the Ashmolean Museum, the Victoria &amp; Albert Museum and Manchester Art Gallery.

Claire Mort Applied Arts Category Winner For years I have kept my mouth shut about things I find difficult or that hurt me, or indeed have a negative impact on my life. I have done this for fear of rejection, judgement and ridicule, real or imagined. Then one day I had had enough, I picked up a needle and began to find my voice. I quickly discovered that its not just me who feels like this. These works are about courage and are the beginnings of my continued journey to speak my truth. They are also a play on words and themes. clairemortartist.com

John Makepeace Applied Arts SELECTOR John Makepeace started his career as a designer and maker in 1959. His passion for designing furniture for individual clients has grown steadily alongside his love of our indigenous woodlands and transforming their produce into artefacts for the future. Each becomes a landmark in the evolving story of fine craftsmanship in wood.

Nesta Davies Applied Arts Category Winner I am a professional bookbinder and teacher, working mostly to commission or for my own pleasure. I enjoy the intellectual and artistic challenge of creating a binding for a book written â&amp;#x20AC;&amp;#x201C; and often illustrated â&amp;#x20AC;&amp;#x201C; by other artists; making my own statement hand in hand with anotherâ&amp;#x20AC;&amp;#x2122;s. In my own book making I am working increasingly with tones and layers. I love the process of producing colours and textures on papers which tell their own story and am drawn to textures, using silks, suedes, woven fabrics and fine Japanese paper. I like my work to be touched!

Tania Kovats Sculpture SELECTOR Tania Kovats is renowned for producing sculptures, large-scale installations and temporal works which explore our experience and understanding of landscape. Her work was the subject of a major solo exhibition at The Fruitmarket Gallery, Edinburgh in 2014. She was Course Director, MA Drawing at UAL, Wimbledon and is Professor of Drawing at Bath Spa University. She is also the author of Drawing Water (2014) and ‘The Drawing Book: A Survey of Drawing – The Primary Means of Expression (2017).

Barbara Ash Sculpture Category Winner “Flights of fancy” – a series of sculptures using simplified doll-like forms to pastiche female mythological icons, with playful relish. The work deconstructs conventional perceptions of the “female”, in an attempt to dismantle dominant narratives around how women are depicted in art. In this series I chose to work on an intimate scale using a range of mixed-media, non-precious, often textile, materials, questioning traditional orthodoxies of what pertains to be “serious” sculpture. “All that glitters 1 – 2” – bronze child-woman doll figures with a bronze rose on a chain attached to the wrist cuff, exploring ideas of beauty and expectation.

Having trained at Parson’s School of Design in New York, he was a founding member of the London Designer Collections—subsequently renamed London Fashion Week. Throughout his career, Jasper Conran has pursued his passion for the performing arts. He has created costumes and sets for thirteen ballet, opera and theatre productions. In 1991 he won a Laurence Olivier Award for Costume Design for Jean Anouilh’s ‘The Rehearsal’. Jasper Conran was appointed the Chairman and Creative Director of The Conran Shop in 2012 where he spent three years conceiving and implementing a strategy to reinvigorate and reposition the business. From ‘Designer of the Year’ in 1986 to ‘Retailer of the Year’ in 2013 he is no stranger to awards and commendations. ‘I am honoured to have been asked to help judge this year’s Marshwood Arts Awards &amp; John Hubbard Prize’ he said. ‘The work is always of an exceptionally high standard, and I look forward to seeing 2019’s entries.’

Sibyl King hails from Pittsburgh and has loved Dorset from the moment she arrived. She is the Director of the Fine Family Foundation which supports Dorset-based charities working in the environment, arts, health, and the community. Sibyl was involved in setting up the KUBE Gallery in Poole and chaired it from 2000 to 2010. She is a keen art collector herself. Sibyl is a patron of the visual arts, and this interest is integrated into many of her projects including The Fine Foundation Gallery and timeline Path at Durlston Country Park. Through her work with the Foundation she has been able to actively participate in projects which add to the quality of our environment and our lives, including numerous visitor centres, commissioning public art, and most recently establishing a charity called ParkYoga.

Bjรถrk Haraldsdottir Applied Arts John Hubbard Prize Winner My professional background is in Architecture and is a strong influence on my work. In addition I also reference natural forms reflecting my upbringing in Iceland and exposure to the extraordinary in nature. Inspiration is found in anything from Nordic stitching to Architectural detail, geology to shell forms. Much of the work reflects a conversation between the geometric perfection of tessellated pattern, and the inherent imperfections of handbuilt forms. I am interested in the way that patterns change and challenge form, and how something as fluid as clay can be perceived as geometrical and mathematically perfect. The excitement comes from the blurring of the boundaries of the two coming together: the perceived perfect geometry of the pattern blending with the geometrically imperfect form which hand built clay object inevitably is.

2019 Exhibition and Past Selectors

The winners of the 2019 Marshwood Arts Awards