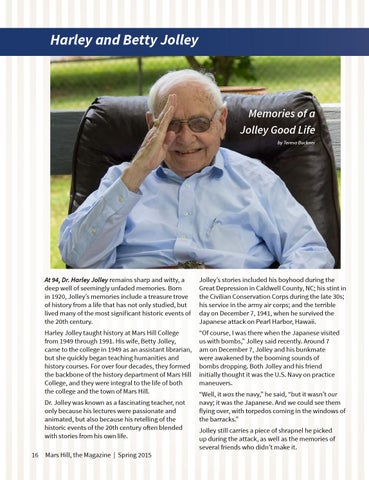 Memories of a Jolley Good Life by Teresa Buckner

At 94, Dr. Harley Jolley remains sharp and witty, a deep well of seemingly unfaded memories. Born in 1920, Jolley’s memories include a treasure trove of history from a life that has not only studied, but lived many of the most significant historic events of the 20th century.

Jolley’s stories included his boyhood during the Great Depression in Caldwell County, NC; his stint in the Civilian Conservation Corps during the late 30s; his service in the army air corps; and the terrible day on December 7, 1941, when he survived the Japanese attack on Pearl Harbor, Hawaii.

Harley Jolley taught history at Mars Hill College from 1949 through 1991. His wife, Betty Jolley, came to the college in 1949 as an assistant librarian, but she quickly began teaching humanities and history courses. For over four decades, they formed the backbone of the history department of Mars Hill College, and they were integral to the life of both the college and the town of Mars Hill.

“Of course, I was there when the Japanese visited us with bombs,” Jolley said recently. Around 7 am on December 7, Jolley and his bunkmate were awakened by the booming sounds of bombs dropping. Both Jolley and his friend initially thought it was the U.S. Navy on practice maneuvers.

Dr. Jolley was known as a fascinating teacher, not only because his lectures were passionate and animated, but also because his retelling of the historic events of the 20th century often blended with stories from his own life. 16

“Well, it was the navy,” he said, “but it wasn’t our navy; it was the Japanese. And we could see them flying over, with torpedos coming in the windows of the barracks.” Jolley still carries a piece of shrapnel he picked up during the attack, as well as the memories of several friends who didn’t make it. 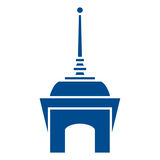