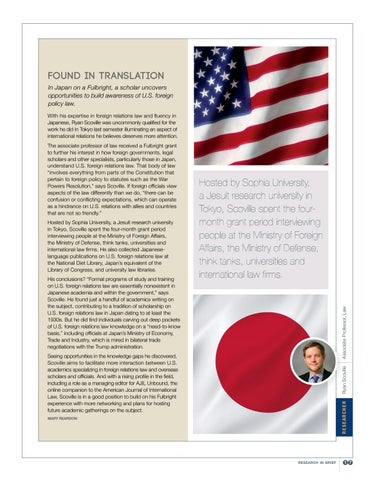 Found in Translation In Japan on a Fulbright, a scholar uncovers opportunities to build awareness of U.S. foreign policy law. With his expertise in foreign relations law and fluency in Japanese, Ryan Scoville was uncommonly qualified for the work he did in Tokyo last semester illuminating an aspect of international relations he believes deserves more attention.

The associate professor of law received a Fulbright grant to further his interest in how foreign governments, legal scholars and other specialists, particularly those in Japan, understand U.S. foreign relations law. That body of law “involves everything from parts of the Constitution that pertain to foreign policy to statutes such as the War Powers Resolution,” says Scoville. If foreign officials view aspects of the law differently than we do, “there can be confusion or conflicting expectations, which can operate as a hindrance on U.S. relations with allies and countries that are not so friendly.”

Seeing opportunities in the knowledge gaps he discovered, Scoville aims to facilitate more interaction between U.S. academics specializing in foreign relations law and overseas scholars and officials. And with a rising profile in the field, including a role as a managing editor for AJIL Unbound, the online companion to the American Journal of International Law, Scoville is in a good position to build on his Fulbright experience with more networking and plans for hosting future academic gatherings on the subject. MARY REARDON 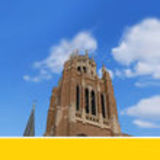