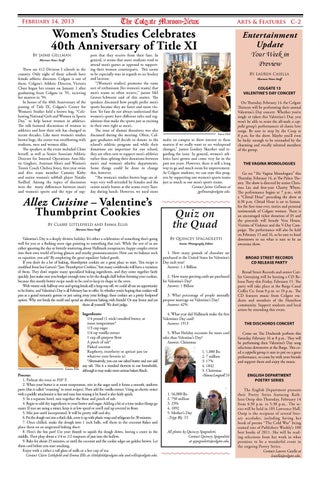 There are 412 Division I schools in the country. Only eight of those schools have female athletic directors. Colgate is one of them. Colgate’s Athletic Director, Victoria Chun began her tenure on January 1 after graduating from Colgate in ’91, recieving her masters in ’94. In honor of the 40th Anniversary of the passing of Title IX, Colgate’s Center for Women’s Studies held a brown bag, “Celebrating National Girls and Women in Sports Day,” to help honor women in athletics. The talk featured discussions of women in athletics and how their role has changed in recent decades. Like most women’s studies brown bags, the center was overflowing with students, men and women alike. The speakers at the event included Chun herself, as well as Senior Associate Athletic Director for Internal Operations Ann-Marie Guglieri, Assistant Men’s and Women’s Tennis Coach Chelsea Jones, first-year swim and dive team member Cammie Kirby and senior women’s softball player Natalie Siedhof. Among the topics of discussion were the many differences between men’s and women’s sports and the type of sup-

port that they receive from their fans. In general, it seems that more students tend to attend men’s games as opposed to supporting their women counterparts. This seems to be especially true in regards to ice hockey and lacrosse. “[Women’s studies] promotes the same sort of enthusiasm [for women’s teams] that men’s teams so often recieve,” junior Mel Grover-Schwartz said of this matter. The speakers discussed how people prefer men’s sports because they are faster and more violent. Yet fans do not always understand that women’s sports have different rules and regulations that make the sports just as exciting in their own right as men’s. The issue of alumni donations was also discussed during the meeting. Often, Colgate graduates will decide to donate to the school’s athletic program and while their donations are important for our school, they are often sent to support men’s athletics rather than spliting their donations between men’s and women’s atheltic departments. Some things could be done to change this, however. “The women’s studies brown bags are always very well-attended by females and the center nearly bursts at the seams every Tuesday during lunch. However, we need more

Valentine’s Day is a deeply divisive holiday. It’s either a celebration of something that’s going well for you or a flashing neon sign pointing to something that isn’t. While the rest of us are either ignoring the day or bitterly muttering about Hallmark conspiracies, happy couples retreat into their own world of loving glances and mushy pronouncements. How can we balance such an equation, you ask? By employing the great equalizer: baked goods. If you don’t do a lot of baking, thumbprint cookies are a great place to start. This recipe is modified from Ina Garten’s “Jam Thumbprint Cookies,” but many cookbooks will have a variation of them. They don’t require many specialized baking ingredients, and they come together fairly quickly. Just make sure you budget enough time to let the dough chill before forming your cookies, because this mostly-butter recipe needs to be cool to keep its shape in the oven. With winter only halfway over and spring break still a long way off, we could all use an opportunity to be festive, and Valentine’s Day is all February has to offer. So whether you’re hoping that cookies will pass as a grand romantic gesture or just eating away your feelings, these cookies are a pretty foolproof option. Why not break the mold and spend an afternoon baking with friends? Or stay home and eat them all yourself. We don’t judge.

Ingredients: 1/4 pound (1 stick) unsalted butter, at room temperature* 1/3 cup sugar 1/4 tsp vanilla extract 1 cup all-purpose flour A pinch of salt* Flaked coconut Raspberry, strawberry or apricot jam (or whatever your favorite is) *Alternatively, you can use salted butter and not add any salt. This is a standard shortcut in our households, although it may make more serious bakers flinch.

Process: 1. Preheat the oven to 350° F. 2. When your butter is at room temperature, mix in the sugar until it forms a smooth, uniform paste (this is called “creaming” in most recipes). Then add the vanilla extract. Using an electric mixer with a paddle attachment is fast and easy, but mixing it by hand is also fairly quick. 3. In a separate bowl, mix together the flour and pinch of salt. 4. Begin to add dry ingredients to your butter and sugar. Adding a bit at a time makes things go easier. If you are using a mixer, keep it at low speed or you’ll end up covered in flour. 5. Mix just until incorporated. It will be pretty stiff and dry. 6. Pat the dough out into a thick disk, cover it up with plastic wrap and refrigerate for 30 minutes. 7. Once chilled, make the dough into 1 inch balls, roll them in the coconut flakes and place them on an ungreased baking sheet. 8. Here’s the fun part! Use your thumb to squish the dough down, leaving a crater in the middle. Then plop about a 1/4 to 1/2 teaspoon of jam into the hollow. 9. Bake for about 25 minutes, or until the coconut and the cookie edges are golden brown. Let them cool before you start snacking. Enjoy with a either a tall glass of milk or a hot cup of tea. Contact Claire Littlefield and Emma Ellis at clittlefield@colgate.edu and eellis@colgate.edu.

Entertainment Update Your Week in Preview

males on campus to show interest in these matters if we really want to see widespread changes,” junior Lindsey Skeerker said regarding the issue. In general, women’s athletics have grown and come very far in the past ten years. However, there is still a long way to go and much room for improvement. As Colgate students, we can start this progress by supporting our women’s sports teams just as much as our men’s sports teams. Contact Jaime Gellman at jgellman@colgate.edu.

Quiz on the Quad By Quincey Spagnoletti Senior Photography Editor

On Thursday, February 14, the Colgate Thirteen will be performing their annual Valentine’s Day concert. Whether you’re single or taken this Valentine’s Day, you won’t be able to resist the all-male a cappella group’s performances of classic love songs. Be sure to stop by the Coop at 8 p.m. for the show. Maybe you’ll even be lucky enough to be serenaded by the charming and vocally talented members of the group.

The Vagina Monologues Go see “The Vagina Monologues” this Thursday, February 14, at The Palace Theater. The show is directed by senior Christina Liu and first-year Charity Whyte. The performance begins at 7 p.m., with a “Clittail Hour” preceding the show at 6:30 p.m. Clittail Hour is set to feature, for the first time ever, stories and personal testimonials of Colgate women. There is an encouraged ticket donation of $5 and the proceeds will benefit Vera House, Victims of Violence and the V-Day Campaign. The performance will also be held on February 15 and 16, so be sure to head downtown to see what is sure to be an awesome show.

Broad Street Records CD Release PartY Broad Street Records and senior Caitlin Grossjung will be hosting a CD Release Party this Friday, February 15. The party will take place at the Barge Canal Coffee Co. from 8 p.m. to 10 p.m.. The CD features music from Colgate students and members of the Hamilton community. Support students and local artists by attending this event.

The Dischords Concert Come see The Dischords perform this Saturday, February 16 at 8 p.m.. They will be performing their Valentine’s Day song selections downtown at the Barge. This coed a cappella group is sure to put on a great performance, so come by with your friends and support them and enjoy the music.

English Department Poetry Series The English Department presents their Poetry Series featuring Kathleen Ossip this Thursday, February 14 from 4:30 p.m. to 5:30 p.m.. The series will be held in 105 Lawrence Hall. Ossip is the recipient of several literary accolades, including having her book of poems “The Cold War” being named one of Publishers Weekly’s 100 best books of 2011. She will be reading selections from her work in what promises to be a wonderful event in the ongoing Poetry Series. Contact Lauren Casella at lcasella@colgate.edu. 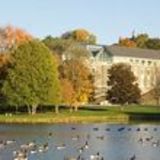