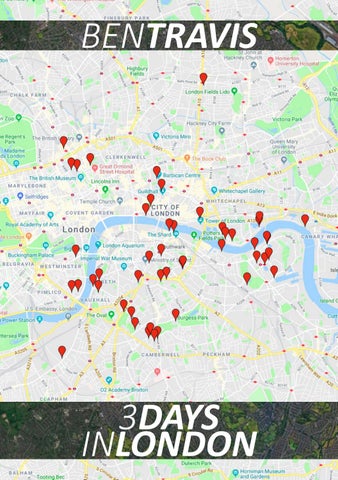 INEVITABLE FOCUS/EXPOSURE TEST #34 OF THE DAY

In mid-September, team rider Ben Travis packed his brand new dark chrome Arcade into his van and headed south from Aberdeen to London. The plan was to spend 2 days riding some new spots before heading to the TartyBikes Weekender event. Unfortunately, the Weekender event was cancelled, meaning Ben had an extended stay in London to look forward to. This, and the accompanying video, show what Ben got up to, and go behind the scenes of putting together a video in a well-known city on a tight time frame. Filmer/photographer Mark Westlake takes over...

ONE OF THE MANY LUCKY SIDE STREETS FINDS. LATIMER ROAD, DAY TWO.

“THERE’S GOT TO BE SOMETHING...” Armed with an out of date Google Maps spot map, some patchy knowledge of London from a street jam in 2015 and a willingness to put the miles in, Ben and I met up at our hotel in Hampstead on Wednesday morning. As you may have seen from his Bristol videos, Ben is keen to find new spots and explore the places he rides, and arguably nowhere else in the UK rewards you as much for that as London. I knew beforehand that Ben was planning on riding some lesser known spots, but I don’t think either of us expected to do as many “Shall we just look down here?” side street excursions as we did. Having checked into our hotel (a “World Centre for the World Association of Girl Guides and Girls Scouts” - ask Ben...), we got our bikes built up and bags on our backs. Ben fired up his trusty Maps app and found our first spot for the day. Not long after heading out from the car park, we started taking some detours to look at interesting looking spots, with the refrain of “There’s got to be something...” making its first of many appearances.

The photo opposite was the first riding photo of the trip, and came about from an explore in a promising looking estate that didn’t live up to our expectations. Our strike rate for finding spots in our many sudden turns down interesting looking streets and alleyways was relatively low, but this made the ones that turned up trumps even more rewarding. Luckily, Ben has a fairly wide skill-set from his years of trials riding, so making the most of these more technical, trials-orientated spots we found wasn’t much trouble. Although we didn’t stop to film or photograph everything, it’s fair to say that Ben certainly managed to keep his ratio of riding to exploring well balanced. Over the next 3 days, we got to experience a broad cross-section of London, from the affluent, well-to-do areas with houses that were pushing into 7and 8-figure value territory through to the sketchiest of run-down housing estates. With one exception, all the people who spoke to us while we were out riding were enthusiastic and supportive - not at all like the stereotype of most Londoners.

Our days consisted generally of waking up at around 9am, doing the usual social media lap, then heading out with the bikes to catch some breakfast on our way to the first spot. London breakfast prices were an eye-opener - a fun game to play is to find the highest price for extra bacon. Our record was £3.50 for 2 rashers. Bargain... Ben had a loose plan for areas he’d like to head to, but we didn’t have a set agenda. The more exploratory nature of the trip was a refreshing change, and it was a lot of fun to take more meandering routes through the city. The more relaxed atmosphere changed whenever it got to the sharp end of filming a move. I’ve been lucky enough to film with a wide range of riders, but no-one goes at lines with the same intensity that Ben does. No sooner has he had one attempt than he’ll be circling around for another go, barely giving me time to stop recording and re-set everything. This was all the more impressive on the back of some serious mileage - on Day 2, we covered over 26 miles. There was never any moaning though, and enthusiasm levels stayed high the whole time. I’m looking forward to the next trip! MW

OUR STRAVA MAP FROM DAY 2, MINUS THE 2 MILE RIDE BACK TO THE HOTEL.

A QUICK MAPS CHECK BEFORE HEADING OFF TO FIND MORE SPOTS. THE ONLY CASUALTY OF THE TRIP - A BROKEN FLASH SYNC LEAD.

ALTHOUGH WE KNEW THIS WAS A “WELL USED” SPOT, IT WAS BEN’S FIRST ACCESS RAIL HOP SO HE DIDN’T PASS UP THE OPPORTUNITY. MORNINGTON CRESCENT, DAY TWO.

“YOU NEVER KNOW WHAT YOU MIGHT FIND...” To see how Ben found his first solo filming trip in London, we sent him some questions about both how the trip went, and also about his new Arcade build. WHAT MADE YOU CHOOSE LONDON FOR A TRIP? Initially the Tarty Bikes weekender was on, so it was going to be a prelude to riding there. Unfortunately, the event got cancelled, but having already booked the accommodation with Mark I wanted to make it happen. London is huge, and the ever changing cityscape means there are always new opportunities for finding un-ridden lines. Additionally, I’d seen a few videos with spots I’d not ridden that looked like they had potential and felt I could get something decent done there. DID YOU HAVE A LIST OF SPOTS YOU WANTED TO RIDE BEFORE YOU WENT? Every city I go to for a trip I usually make a ‘spot map’, so I’m always ready with possible / well known spots to check out on my phone. While I enjoy the hunt for new lines / spots, its always nice to know that you have the option to revert to those you can bank on for riding.

A RARE BREAK IN FILMING, CONTEMPLATING THE ENDER LINE.

LONDON IS A BIG CITY, WHAT WAS EXPLORING IT LIKE? Tiring. I think we hit 26+ miles on day two. On a trials bike, that isn’t pleasant. However finding some new spots I’d not seen before and riding / filming new lines really made it worthwhile. Both Mark and I enjoy the hunting aspect so all in all I knew its what I’d signed up too. WHAT WAS YOUR FAVOURITE SPOT FROM THE TRIP? I don’t think I have a favourite really. I’ve always liked the random housing estates and spend quite a lot of time thinking how the architect thought it was going to be used...I fully recommend just riding around and looking down side lanes / alleys when in London. You never know what you might find. WHICH LINE TOOK THE LONGEST TO PULL? Probably the ender line. I couldn’t go straight to back on the hook part of the line, but it was almost ‘too small’ to hook. I couldn’t get the timing / effort required right, and with it being a twist to 90 on a thin wall I spent far too long messing getting that right. Mark probably had enough time / angles to do a Matrix Bullet Time camera shot, but I’m really pleased with getting it done.

WHICH WAS THE MOST FUN TO DO? Probably the ABD access rail hop that takes very little time in the video. I usually put so much time into finding ‘lines’, trying not to do only one trick or move in a clip, but I enjoyed this one. Once I got over my mental battle with it, boosting over it was so much fun to do. Mark tends to find me stuff he knows I’m not comfortable with and forces me into nailing it. I was glad he did.

WERE THERE ANY LINES THAT YOU DIDNâ&#x20AC;&#x2122;T MANAGE TO PULL? There were a few things that got away from me, and a few I maybe compromised on, but my excuse was usually being sapped of energy after riding for 8 hours a day. Hopefully I can get back and nail them on my next trip to the big smoke.

YOU’VE JUST BUILT UP A NEW DARK CHROME ARCADE - WHAT DO YOU THINK OF THE NEW COLOUR? I love the new colour, there is something really industrial about it, which I only think works on steel frames. The previous red really stood out, but I like how subtle this is in comparison. WHAT LITTLE CHANGES AND MODIFICATIONS HAVE YOU MADE TO YOUR BIKE PEOPLE MIGHT NOT NOTICE/SPOT? I did go a little mad on this build, chrome Ti Bolts wherever possible, carbon headset and cassette spacers, but the main standouts are the orange Hope Pro 4 hubs (thanks Mark) as my main colour accent on the bike, and also the Chrome MT6 Magura brakes with HC3 Levers front and rear. I run the MT6’s as I find they catch the pads less than the 4 pot brakes. I’ve ran them for a couple of years now and really like them. More importantly, the chrome really stands out.

HOW DID YOUR BIKE HOLD UP ON THE TRIP? The Arcade stands up amazingly to everything I throw at it. I took a couple of hard hits and bad landings but the bike just carried on regardless. The only thing I had to do was move re-tension my chain (due to chain stretch). I’ll be honest, it certainly handled the crashes better than my body did. YOU COULD CHOOSE ANY BIKE FROM OUR RANGE TO RIDE - WHY DID YOU CHOOSE THE ARCADE? My main draw to the arcade has always been the appearance, but I remember riding a prototype Ali had years ago and the geometry immediately felt right to me. It felt like I could do ‘trials’ on it, as well as trying the street stuff. The Skye has always been a little short for me with my background on pure trials bikes, while I didn’t get along with the slightly slacker head angle on the Fourplay. The Arcade just feels right for me.

TWEAKED DROP OFF AT THE ENDER SPOT. CHANCE FIND NEAR THE HOTEL, DAY THREE.

VISIT WWW.INSPIREDBICYCLES.COM TO LEARN MORE ABOUT THE ARCADE, SEE MORE OF OUR TEAM RIDERS IN ACTION AND FIND YOUR NEAREST DEALER. 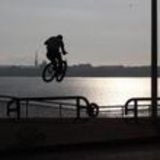