Hydropower –The number one renewable energy today…. and tomorrow? 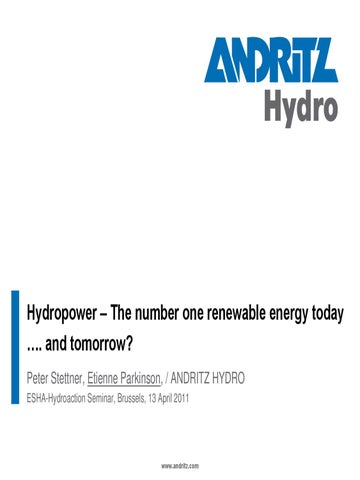 Hydropower – The number one renewable energy today …. and tomorrow?

Europe and the Renewable Energy Sources

Europe and the Renewable Energy Sources

The Change of Generation Mix The generation mix in all European countries is essentially evolving towards renewable technologies â&amp;#x20AC;Ś.

Europe: Capacity vs. Generation Â&amp;#x192; Operating hours matter: tremendous growth in installed capacity does not translate in the same proportion of generated electricity (wind / solar instability, distribution, storage) Â&amp;#x192; Low carbon generation sources (RES, hydro, nuclear) will become the major generation source in the next decades (46 to 60% between 2008 and 2030)

Hydro capacity will remain crucial as back-up for intermittent RES

Â&amp;#x192; In 2009, investment in renewable energy fell in the EU by 10% in the context of the economic crisis, while it increased by more by more than 50% in China (1 windmill per hour in Chinaâ&amp;#x20AC;Ś) Source: International Energy Agency www.andritz.com

Pumped Storage is the stabilizing factor

Pumped Storage is the stabilizing factor

ÖFor each additional 20GW upgraded per year and for each 5% of increase of performance, rehabilitation programs will create 1,000MW of renewable and predictable energy www.andritz.com

The Role of Europe’s Hydropower Industry

The Role of Europe’s Hydropower Industry

The global market has quickly recovered after the global financial crisis and has crossed the 7 bill. â&amp;#x201A;Ź mark in 2010!

Francis Runner Manufacturing in Europe Guri / Simon Bolivar, Venezuela Â&amp;#x192; The hydro power plant Simon Bolivar in Guri with 10,300 MW installed capacity is one of the worldwide largest power stations of this type. Â&amp;#x192; Each of the 5 Francis turbines has a max. output of 770 MW and belongs to the most powerful turbines worldwide.

Investment in energy R&amp;D in the EU Share of energy investments in 2007

Europe spends on average â&amp;#x201A;Ź 20 on energy R&amp;D per inhabitant, with the private sector contributing for a half (55%). Source: European Commission www.andritz.com

Global spending on research and development in renewable energy by technology, 2009

¾ Dedicated hydro R&amp;D / support funding is needed…not only other RES!

Hydropower –The number one renewable energy today…. and tomorrow?

Hydropower –The number one renewable energy today …. and tomorrow?