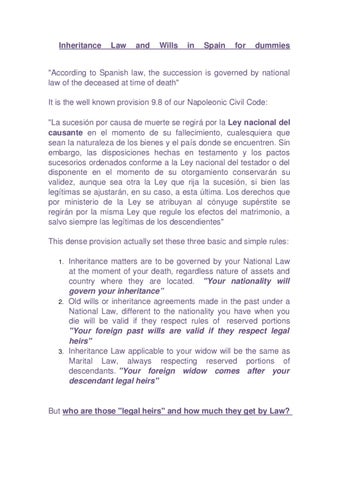 But who are those &quot;legal heirs&quot; and how much they get by Law?

You can either specify particular properties o assets to be attributed to certain person/s or just make general statements on who are your heirs. When you attribute a good to a specific person, this is called a “legacy” and the beneficiary is a &quot;legatee&quot;. These legacies also need to respect the legal portions of legal heirs. You can also designate one or more persons to deal with the inheritance: executor/s. It is also possible to appoint guardians when there are minor children, for the case when both parents are missing. The will is always revocable, meaning that you can always change it. It does not impede you to sell your assets as the will have no legal effects till you die

If you want to leave your widow or widower with the greatest possible rights, you can bequeath him/her the “universal&quot; usufruct, (all you had before dying) and name your children as heirs equally. The widow/ widower will be able to use and receive income and benefits of the common patrimony (if they were married under the common goods system). In no event he/she may sell anything without all the children give their consent. Once the widow/widower dies, the children will receive, without limitation, inheritance of both parents.

If you leave no will, Law will determine who are your heirs. Who are the preferent heirs for Law?

1.Your widow/widower: Law will always give to her/him the usufruct of one third of your goods 2. Your children: Law will distribute your goods among them. Shares will be equal. If one of your children had died before you, your grandsons/granddaughters would receive this portion, if there were no grandsons/granddaughters of this pre­deceased child, his/her brothers and sisters (yours sons and daughters) would get an increase on the portion of your inheritance. 3.Your parents will inherit all your assets if you die without children 4.Your grandparents will be your legal heirs if you are an orphan and have no children Finally, if you had no children, no parents, no grandparents….your widow/widower would be your sole heir. As you can see our system, “ inherited” from Old Roman gives prevalence to consanguinity over affinity

If you die without a will, your heirs will have to formalize what is called a”certificate of inheritance&quot;, an affidavit that formally declares who are the relatives entitled to inherit under the above explained rules. Who does need to issue the formal declaration? If, according to rules of Law, your heirs are your descendants, ascendants or spouse, this affidavit needs to be made by the local Notary where you had your last domicile. If the heirs under the law are other ones (siblings, children of brothers or more distant degree relatives), the declaration of heirs have to be made by the Judge. What documents will your heirs have to bring to the Notary? 1.Personal identification card

2.Certificate of death 3.Negative Certificate from the General Registry of last wills 4.Family Book 5.Two witnesses among friends of the deceased´s family, no relatives Costs of this process are three folded to costs of a will if the statement is made by a notary and for more than three if the statement needs to be done before the judge.