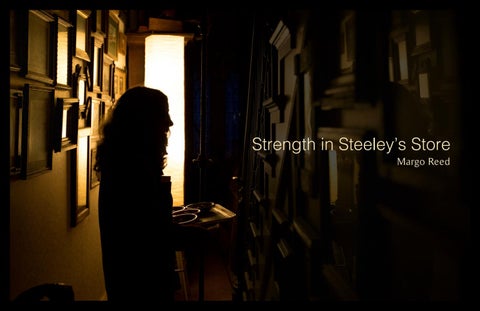 This book is dedicated to my dad, who inspires me to live in the moment even though he loves the past. Thank you to the Steeleeys for answering my letter when I was a total stranger.

Nurturing Collections Analog clocks tick and chime throughout the old general store, haunting overnight visitors and lulling the homeowners to sleep. Clocks count time, a simple measure of change. The store ages with its town and grows with its owners. Steeleyâ&#x20AC;&#x2122;s store, or Main Street Antiques, sits in a quaint village between rolling hills and along the Schuylkill River in Berks County. The Steeleys have seen much change in their lifetimes, and antiques are their way of preserving it-remembering the past through its physical characters.

She admires a dead tree next to a small cemetery of dead cats, hoping her 17-year-old cat, Reiley, will live just a few days longer. She looks at the barn, which will be taken down by Penndot through eminent domain along with homes built too close to the adjacent bridge. When buying the store, which doubles as their home Steeley knew it was a perfect fit for the couple. Its historical, untouched semblance was what they needed to keep their antique collection alive. Her strong, nurturing energy is at home in the small, quiet town.

Traffic is scarce as the riverâ&#x20AC;&#x2122;s currents hum through the backyard. Large, colorful gardens full of flowers and fruit will bloom in the summer, a rural Pennsylvania landscape in foliage and architecture. Shawna Steeley sits behind her home and store and smokes a cigarette, recalling her life both before and after her time here.

Walking through doors she never knew existed Steeley’s plans to hike the Appalachian Trail were put on hold when she got pregnant at 18 and kept her baby girl, Saja. During another pregnancy, Steeley’s ex-husband pushed her down the steps so forcefully she lost the twins she was bearing. She left him shortly after the incident to move to Berks County with her daughter, and she showed no signs of looking back.

“I recreated myself,” Steeley said. “…And I invented a very nice person.” Steeley embraced her strong character as both a mother and a worker. She attended college with four-year-old Saja and worked as one of three-percent of female

“There was a beautiful, grocery store managers in the country. She said she was a beautiful light, and I wanted to go there.” “sought after commodity” in the grocery industry while she Steeley says her mother was raising her daughter. decided not to die until her Steeley’s family history is children were raised. She was full of working women. Her a stubborn woman concerned grandmother and mother were with rules and manners similar to the way her grandmother very stubborn, which is one trait they have in common. was concerned with grammar and respect. Steeley holds an antique Steeley spent summers with photograph of a kindergarten her grandparents, where she class, her voice full of and “Gram” bonded. admiration and nostalgia. Her grandmother was a “The thing on your shoulders kindergarten teacher while is not a decoration,” Steeley raising children, which was says as she recalls her uncommon in 1928. grandmother’s advice. One generation later, her The thing on top of your mother battled cancer while shoulders is your head. she was pregnant. “I died,” Steeley tells her mother’s chilling story.

Shawna Steeley walks through her back yard in Berks County, where the river passes directly behind the barn that will be knocked down by Penndot. Steeley has an herb garden, bird feeders, and a collection of birdhouses in her yard and on the barn. Tick tick tock tock tick tock

Steeley sits in a bedroom covered in antique photographs. She and her siblings used to tease her mom for going to kindergarten twice because she went one year early. She went to the class because Steeleyâ&#x20AC;&#x2122;s grandmother taught it and she had no one to take care of the children while she was at work. Tick tick tock tock tick tock

Glowing for twenty-two years Steeleyâ&#x20AC;&#x2122;s first antique, an old, stained glass lamp, shines in a dimly-lit bedroom in her home today. She never planned on keeping it, but she married into the Steeley family and the antiquing lifestyle. After six months of travelling with a fifty-pound- pack on the Appalachain Trail, Steeley returned to her job at the grocery store where Skip Steeley had become a regular customer. Her thin, toned legs had been free for over 2100 miles on the trail. Skip can still remember the day she came back to work at the grocery store.

â&#x20AC;&#x153;I had never seen her in a dress before,â&#x20AC;? Skip recalls, impressed 22 years later. He was unsatisfied with looking for a mate in the antique business. He and Shawna bonded in new ways when they visited The Mercer Museum and historical home for the first time. They got married in 1994 and moved into their new home in 2000. She left her job at the grocery store and went to work at the antique store.

Skip frames a photograph in the framing room in his house. There are hundreds of antique photos hanging on the walls, and he often identifies characters in the photos that he can match with a person from his childhood. 10

Preserving Time Skip sits at the kitchen table most interesting is the antique writing his to-do list and a toaster collection. There are cat sits on his lap purring over 300 photos hanging in comfortably. the house-- all have stories, characters, and symbols of “Clock Hallway” is printed on Skip’s childhood. the dirty paper-- something in the house is missing without Mrs. Baver kept the store the clock’s tick. running even after she was widowed in the 1920s. The He pulled one clock from an Bavers kept it open until 1951. abandoned home in Kansas Steeley’s Store intentionally during college. Characters resembles Baver’s general and artifacts of the past have store because the Steeleys always intrigued Skip. want to preserve its original appearance. Collections fill the house and store that once belonged to the Baver family. One of the

Skip takes the store’s “open” sign indoors for the evening. Many nights the Steeleys forget to bring the sign inside, but it does not hurt business. Tick tick tock tock tick tock

Steeley carries fresh coffee grounds through the store. He hangs plants that he rescued from the trash in the windows, and other collections surround him in the store. Tick tick tock tock tick tock

Responding to Change Among the Steeleys’ private collections is an American flag covered with Vietnam War protest buttons. It hides the door to a small, attic-like room on the second floor of their home.

“We know we disagree, so we just don’t talk about it,” Shawna said in regard to politics in town. The county as a whole is comprised of more Republican voters, and most of the Steeleys’ ideologies do not match up.

Both of the Steeleys protested the Vietnam War in the 1960s. Skip protested at McPherson College in Kansas and at the PA Capitol in Harrisburg, and Skip chuckles and recalls Shawna in Mooresville NJ a conversation at the local when she was just farmers market. A woman told eight-years- old. him she would pray for him after realizing he would not be Politically speaking, they are voting for Trump in the 2017 unlike most of their neighbors. election. Of 589 people who voted in the borough, only 179 of “You don’t have to pray the presidential votes went for me,” Skip said. “I’m an to Hillary Clinton in the past Atheist.” He believes church election. The Steeleys did not and state are too linked in vote for President Trump. today’s political arena.

Steeley stands in the kitchen in his home. He said he likes to voice his opinion in ways such as using bumper stickers or protesting the Vietnam War. Tick tick tock tock tick tock

Shawna, who underwent an abortion after being diagnosed with German measles when she was pregnant with another child, feels that no man or menopausal woman should have the right to vote on abortion legislation.

were treated unjustly for their decisions to abort babies.

“No one knows what you go through.”

The Steeleys lost customers after hanging a Democratic Party postcard in their store in 2008, and their Obama sign was stolen from the front lawn. Nonetheless, the Steeleys love their neighbors. The small town and quiet Main street fosters a friendly, outdoor environment.

She received an abortion shortly after it was legalized in the 1970s, and she believes some women at the time

The backyard is full of firewood, fire pits, chairs and tables. It’s set up for a campfire or a picnic.

Steeley said a woman who shared her hospital room after their abortions was treated unfairly by the employees because she chose to abort her baby due to financial issues. Tick tick tock tock tick tock

A truck is parked behind Steeleyâ&#x20AC;&#x2122;s store near firewood, plants, and their barn which will be torn down by Penndot when they expand the bridge that runs across the Schuylkill River. 220

“My mother once gave him advice,” Shawna retells her mother’s advice to Skip.

“In the backyard mowing”

“Working in the Garden. Ring the Bell” The Steeleys don’t have nearly as many visitors as they did in the past so they work in the home and the store simultaneously. Shawna does laundry, and Skip frames photos. He mows the lawn and she vacuums the house (every day because they live with eight cats). She runs the register and he tells the stories about goods in his store. Customers usually stop by on Saturdays to wiggle through the dusty shelves and items.

Skip often takes trips to buy and sell antiques, and Shawna’s energy keeps her busy while she works on maintaining the store and its customers. She will say that no man can take care of her, and it is evident her personal strength comes from the lifestyle she has created for herself in Berks County and in Steeley’s store.

“It was always me. I was always there; I was just not intimidated by anybody anymore.”

Shawna said she was bored in high school shortly before she went to college a year early. She came home from Penn State and graduated with her high school class before giving birth to her daughter, Saja. Tick tick tock tock tick tock

Shawna looks at Skip from her seat in the store. Her role in the store is usually to complete sales and research items that Skip finds on the road. Business has slowed down over the past few years so Shawna often works in the house during store hours. Tick tick tock tock tick tock

Strength in Steeleyâ&#x20AC;&#x2122;s Store The clocks are ticking, each at a different tempo. They are telling time and the Steeleys are preserving it.

She walks back toward the house away from the river. The sun is setting and casting a golden spotlight through the Outside, Shawna Steeley takes windows and into the kitchen. Shawna walks inside- she one last puff of her cigarette, always goes back inside. Her and walks from the backyard toward the small cat cemetery husband sends the clock for repair so time and all of its along the river. Reiley only made it three more days. She stories will continue being told is a proud witness of life birth in Steeleyâ&#x20AC;&#x2122;s Store. and death- a person who has found freedom in all that she does. Steeley fostered pride in herself while living in Berks County. 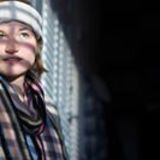