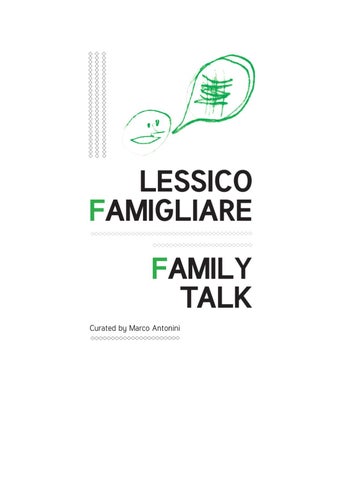 This Publication is Free

Lessico Famigliare On the evolving language of familiar relationships in contemporary visual art by Marco Antonini /// In the 1963 novel Lessico Famigliare (known in English-speaking countries as What we Used to Say or Family Sayings, but more readily translatable as “Family Talk”) Natalia Ginzburg uses an apparently detached and ironically humorous family memoir as a device to highlight the ritualistic importance of words and constructed behavior as driving forces behind familiar unity. By the end of Ginzburg’s dry and discreet autobiography, now unanimously considered a masterpiece of post-war Italian literature, the reader is completely immersed in her family’s recurring jokes, ritual exclamations and

assorted little obsessions that stands out as an independent “character” in the novel.

In a 1963 unsigned introduction to the

The attribution is confirmed by Domenico

Scarpa, in his “Cronistoria di Lessico

defines family as something mostly made

Famigliare”, published in appendix to the

of “voices, intertwining over the table during

dinner or lunch, scoldings, jokes, disjointed gags, sentences that we hear over and over again, at every given occasion.” In time, this ritual lingo becomes a real language, only clear to those who practice it daily: the family members. This, to Calvino, is the mysterious “something” that characterizes and bonds together whatever we call family. In Ginzburg’s novel this secret lexicon is projected over a vast repertoire of quirky and often neurotically ritualistic gestures, images 6

and allusions, describing her family nest as a totalizing environment glued together by the invisible bond of language, as stated early in the novelâ&amp;#x20AC;&amp;#x2122;s opening pages: We are five siblings. We live in different cities, some of us abroad: we donâ&amp;#x20AC;&amp;#x2122;t write to each other very often. When we meet, we can be distracted, or indifferent to each other. But it only takes a word. A word or a sentence, one of those ancient sentences, endlessly heard and repeated in our childhood (...) one of those sentences or words would make us recognize each other, us siblings, in the darkness of a cave, among millions of people. Those sentences are our Latin, the vocabulary of our long-gone days, they are like Egyptian or Assyrian-Babylonian hieroglyphs (...) Natalia Ginzburg, Lessico Famigliare,

they are the foundation of our familiar unity.

In recent times, visual artists have

contributed to explore the vocabularies of family relationships, sublimating an increasingly questioning attitude towards forming and/ or maintaining conventional, state or religion -sanctioned family bonds by creating works that explore, deconstruct and problematize their own idea of family. Redefining permanence and commitment in relationships that range from relatively orthodox to totally deconstructed and impromptu affairs, an increasingly relevant number of artists have incorporated family and its structured codes, behaviors and rituals in their work. In doing so, they created art that is directly or indirectly reminiscent of Ginzburgâ&amp;#x20AC;&amp;#x2122;s Lessico Famigliare. Some of these works seem 7

haunted by a sincere desire for close, meaningful relationships

qualitatively located before (and beyond) social relationships and their increasingly scattered, technology-biased nature, others present a more analytical approach to the re-signification of familiar codes and their use as creative material.

redefinition of family matters is not necessarily a point in itself: it often emerges as consequence of trajectories that intersect the familiar and domestic spheres on their way to somewhere or something else. A sampler of such trajectories, and the artworks they generate, reveals a wide range of approaches and diverging â&amp;#x20AC;&amp;#x153;conclusions.â&amp;#x20AC;? Cool, detached observations and surrealistically charged imaginaries converge at points with intense, quasi-masochistic exercises in overidentification that test the boundaries and validity of existing (or supposed) bonds inside the family or affinity group of choice.

The over-simplification of familiar

imagery and the lingering feeling of quiet domesticity found in many paintings, drawings and sculptures by Eva Seufert are representative of the possibility of conceptually evoking familiar contexts via un-specific and inclusive forms. Often literally starting from language, Seufert finds a minimum of relevance and presence in each of her works. Her friendly and colorful quasi-figuration hints at the codes, rituals and psychological subtleties of familiar relationships in its sparse, yet attractive essentialism. This ability to abstractly reference both domesticity and the Eva Seufert 10

family also echoes in Marek and Krystina Milde’s sculptures and installations, deceivingly simpleminded works that bend the most mundane and humble materials in ambitious new directions, often hinting at the familiar nest as a place of petit bourgeois obsessions and homonormative confinement. Diametrically opposed is the dark intensity of works like Nico Vascellari’s Nico and The Vascellari’s performance, a tour de force in which the artist’s father, mother and sister are cast as somewhat reluctant “home” to Vascellari’s screaming spree. As the performance proceeds, the weight of the roof/platform they must stoically support becomes unbearable. Brother and sister must eventually collaborate and double their efforts to save their fatigued mom from bringing the minimalist structure to the ground. Vascellari’s metaphor of induced familiar disfunctionality (and unexpected cooperative redemption) flirts with Christian ideals of familiar struggle and shared sacrifice, its dark humor and claustrophobic overtones are not uncommon in this line of research. Moira Ricci’s heart-rendering series of Photoshopped images of her mother, in which she systematically added herself to each picture, fabricating a virtually endless series of bonding experiences, or her Custodia Domestica performance, a selfimposed confinement to a life-size dollhouse reproducing Ricci’s family home, also come to mind. The latter work, reminiscent of Louise Bourgeois’ well-known Femme Maison drawings, paintings and sculptures, explores the physical space of the family with humor and a vein of unrepentant awkwardness, from the perspective Moira Ricci 11

of a young woman on the verge of facing the kind of life choices that will determine the personal definition of her own familiar space.

Based on the background, personal

investment and original intentions of the artist, family can be identified as a hopeless mess, a safe harbor, a quasi-sacred hyper reality, an informal, affinity-based community, a dark place of trauma and oblivion. As we have seen in Vascellari and Ricci, such pictures can directly involve family members (or objects and places charged with family-related memories.) Relatives and biographical materials both offer a readily available narrative foundation for the artists to work with, build upon or depart from. The direct involvement of family members in the creative process reappears in two wonderfully similar photographic works: Patrick Tuttofuoco’s Famiglia and Ettore Favini’s Ipotesi d’Infinito. These iconic portraits of familiar unity are somewhat romantically leaning towards a spatial and symbolic organization of the family as living “Form”: a fragmented triangle of toy swords in Tuttofuoco’s large-format vision and a merrygo-round drawing the mathematic symbol for infinity in Favini’s relatively intimate print. This kind of fruitful cooperation reveals its potentially

exploitative subtext in Guy Ben Ner’s multi-part exploration of his own family as artistic material, and the involvement of his wife and children in the creation of elaborate narratives inside and outside the domestic precincts. In his videos, Ben-Ner mixes the personal and public spheres by casting his wife and sons in now playful, now uncomfortable and awkward roles. Narrative Ettore Favini 14

plots, often informed by well known literary works and even political theory, are constantly infiltrated by hints of the artist’s day to day life, and his relationship with his ragtag crew of actors.

consistent examples of creative involvement of an artist’s family is without a doubt offered by Bryan Zanisnik’s artwork. Mining the wealth of objects, stories, legends and talent most closely available to him, Zanisnik has created an ongoing series of performances and photographic works that put his own family members, and the apparently infinite amounts of souvenirs and paraphernalia they hoarded, under the spotlight. Creating immersive environments somewhere between bombed rec-room and thrift store owner/customer nightmare, and engaging in all sorts of symbolic activities with his relatives, Zanisnik uses constructed familiar and domestic setting to project anxieties about his own persona and unfold retro-active cathartic narratives.

weirdness while making the most of a completely genuine sense of humor that characterizes even the most serious and problematic of his works, the artist summarizes the variety of different approaches briefly described earlier on. His work is inclusive, it digs the family mine directly and still never fails to transform recognizable objects, places and situations into something deeply “else,” charging them with meanings far beyond those suggested by an anecdotal reading of the work. It makes good use of humor and strikes as often plain funny while also 15

successfully conveying feelings of humiliation, inadequacy, even horror and disgust. Finally, and probably most importantly, Zanisnik’s work is about family bonds and rituals but, in so many ways it isn’t, as most of the artists’ concerns are firmly grounded in reflections on his individuality and/or far reaching considerations on American culture and the influence of normative, restrictive environments on human development. Although belonging to different generations and individually preoccupied with a remarkably heterogeneous set of themes and problems, all abovementioned artists (together with the many more whose work was included in the exhibition that this eBook edition complements) share an interest in the system of signs and codes at the foundation of an extended and permeable notion of family: a self-determined idea as open to criticism as to constructive reinvention. This system, so brilliantly identified by Ginzburg in her Lessico Famigliare, is in no way a fixed entity and it never really self-reproduces itself. Instead, it is generated inside each individual family “unit,” determined by all of its members, tweaked and adapted in real time, on a day to day basis. This flexible and receptive nature is probably among the most fascinating aspects of the familiar bond: something durable, an ideal to commit to, and yet a notion that never ceases to be discussed and redefined.

Marco Antonini is Gallery Director at NURTUREart, a Brooklyn based non profit organization that provides exhibition opportunities and resources for emerging artists, curators, and public school students. While supervising NURTUREart’s exhibitions, special events and publications, Antonini curated WE ARE:, an experimental series that showcased week-long projects by invited artists, curators and organizations for the entire Summer 2011. He is currently at work on another special program: ...Is This Free?, an investigation of the history, development and current status of “Free” art; this sprawling group exhibition will include artworks, ephemera and publications dating back to the late sixties, presented side by side with contemporary artworks, many of which commissioned by NURTUREart. Alongside his work at NURTUREart, Antonini has remained active as an independent curator and writer. His exhibitions have been produced by Japan Society, the Lower Manhattan Cultural Council (LMCC), ISE Foundation, Elizabeth Foundation, The Italian Cultural Center in New York, Bevilacqua La Masa Foundation, the International Studio and Curatorial Program (ISCP) and Centro Cultural de Espana in Guatemala (CCE/G). His reviews and interviews have appeared on Cura, ArtPulse, Flash Art, Whitehot Magazine, BMM, Drome, Contemporary, AroundPhotography and NYArts Magazine. His essays have been published on Cura, Occulto, PulseBerlin, Arte&amp;Critica, BMM, as well as on many exhibition catalogs and exhibition-related publications. 19 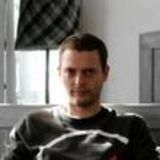