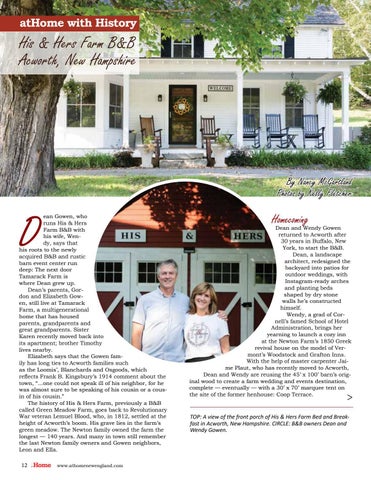 atHome with His &amp; Hers Farm B&amp;BHistory Acworth, New Hampshire

ean Gowen, who runs His &amp; Hers Farm B&amp;B with his wife, Wendy, says that his roots to the newly acquired B&amp;B and rustic barn event center run deep: The next door Tamarack Farm is where Dean grew up. Dean’s parents, Gordon and Elizabeth Gowen, still live at Tamarack Farm, a multigenerational home that has housed parents, grandparents and great grandparents. Sister Karen recently moved back into its apartment; brother Timothy lives nearby. Elizabeth says that the Gowen family has long ties to Acworth families such as the Loomis’, Blanchards and Osgoods, which reflects Frank B. Kingsbury’s 1914 comment about the town, “...one could not speak ill of his neighbor, for he was almost sure to be speaking of his cousin or a cousin of his cousin.” The history of His &amp; Hers Farm, previously a B&amp;B called Green Meadow Farm, goes back to Revolutionary War veteran Lemuel Blood, who, in 1812, settled at the height of Acworth’s boom. His grave lies in the farm’s green meadow. The Newton family owned the farm the longest — 140 years. And many in town still remember the last Newton family owners and Gowen neighbors, Leon and Ella.

Dean and Wendy Gowen returned to Acworth after 30 years in Buffalo, New York, to start the B&amp;B. Dean, a landscape architect, redesigned the backyard into patios for outdoor weddings, with Instagram-ready arches and planting beds shaped by dry stone walls he’s constructed himself. Wendy, a grad of Cornell’s famed School of Hotel Administration, brings her yearning to launch a cozy inn at the Newton Farm’s 1850 Greek revival house on the model of Vermont’s Woodstock and Grafton Inns. With the help of master carpenter Jaime Plaut, who has recently moved to Acworth, Dean and Wendy are reusing the 45’ x 100’ barn’s original wood to create a farm wedding and events destination, complete — eventually — with a 30’ x 70’ marquee tent on the site of the former henhouse: Coop Terrace.

TOP: A view of the front porch of His &amp; Hers Farm Bed and Breakfast in Acworth, New Hampshire. CIRCLE: B&amp;B owners Dean and Wendy Gowen. 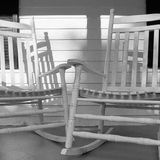 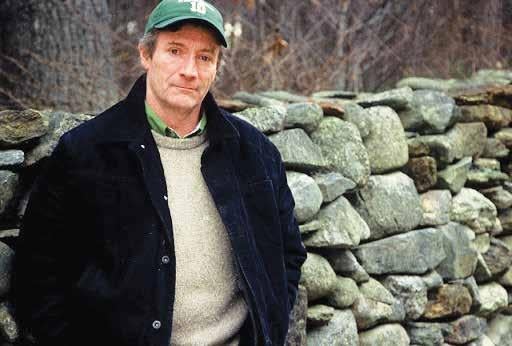 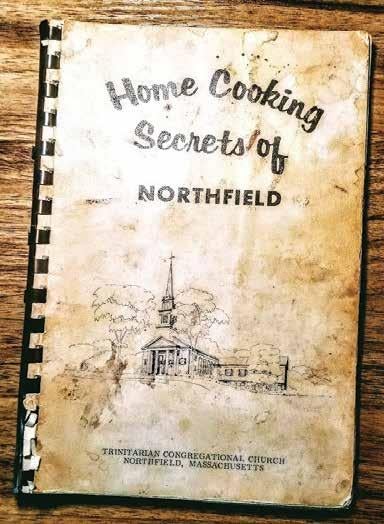