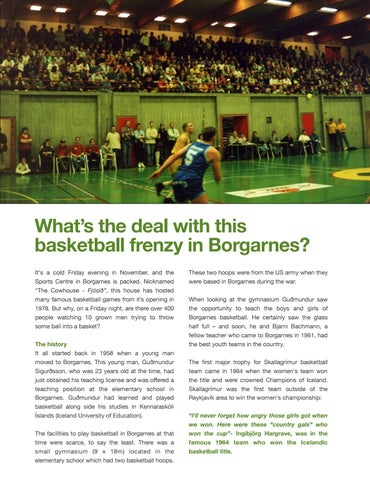 What’s the deal with this basketball frenzy in Borgarnes? It‘s a cold Friday evening in November, and the Sports Centre in Borgarnes is packed. Nicknamed “The Cowhouse - Fjósið”, this house has hosted many famous basketball games from it’s opening in 1978. But why, on a Friday night, are there over 400 people watching 10 grown men trying to throw some ball into a basket?

The history  It all started back in 1958 when a young man moved to Borgarnes. This young man, Guðmundur Sigurðsson, who was 23 years old at the time, had just obtained his teaching license and was oﬀered a teaching position at the elementary school in Borgarnes. Guðmundur had learned and played basketball along side his studies in Kennaraskóli Íslands (Iceland University of Education).

The facilities to play basketball in Borgarnes at that time were scarce, to say the least. There was a small gymnasium (9 x 18m) located in the elementary school which had two basketball hoops.

These two hoops were from the US army when they were based in Borgarnes during the war.

When looking at the gymnasium Guðmundur saw the opportunity to teach the boys and girls of Borgarnes basketball. He certainly saw the glass half full – and soon, he and Bjarni Bachmann, a fellow teacher who came to Borgarnes in 1961, had the best youth teams in the country.

The first major trophy for Skallagrímur basketball team came in 1964 when the women‘s team won the title and were crowned Champions of Iceland. Skallagrímur was the first team outside of the Reykjavík area to win the women‘s championship:  “I'll never forget how angry those girls got when we won. Here were these “country gals” who won the cup”- Ingibjörg Hargrave, was in the famous 1964 team who won the Icelandic basketball title. 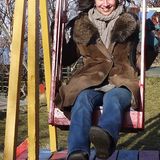 GAMAN SAMAN a Guide to the Borgarfjordar Region in Iceland

Gaman Saman means Fun Together in Icelandic. Discover life in and around Borgarnes. Our articles are engaging in-depth interviews. We fea...

GAMAN SAMAN a Guide to the Borgarfjordar Region in Iceland

Gaman Saman means Fun Together in Icelandic. Discover life in and around Borgarnes. Our articles are engaging in-depth interviews. We fea...