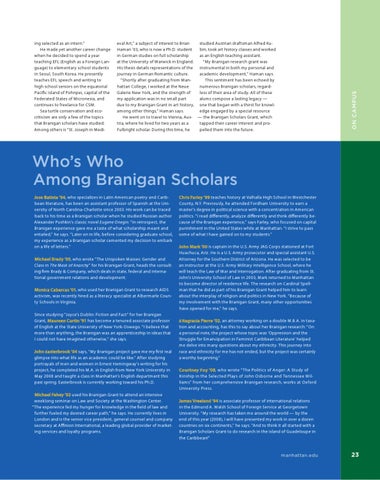 studied Austrian draftsman Alfred Kueval Art,” a subject of interest to Brian bin, took art history classes and worked Haman ’03, who is now a Ph.D. student as an English teaching assistant. in German studies on full scholarship “My Branigan research grant was at the University of Warwick in England. His thesis details representations of the instrumental in both my personal and academic development,” Haman says. journey in German Romantic culture. This sentiment has been echoed by “Shortly after graduating from Mannumerous Branigan scholars, regardhattan College, I worked at the Neue less of their area of study. All of these Galerie New York, and the strength of alums compose a lasting legacy — my application was in no small part due to my Branigan Grant in art history, one that began with a thirst for knowledge engaged by a special resource among other things,” Haman says. He went on to travel to Vienna, Aus- — the Branigan Scholars Grant, which tapped their career interest and protria, where he lived for two years as a pelled them into the future. Fulbright scholar. During this time, he

ing selected as an intern.” He made yet another career change when he decided to spend a year teaching EFL (English as a Foreign Language) to elementary school students in Seoul, South Korea. He presently teaches EFL speech and writing to high school seniors on the equatorial Pacific island of Pohnpei, capital of the Federated States of Micronesia, and continues to freelance for CSM. Sea turtle conservation and ecocriticism are only a few of the topics that Branigan scholars have studied. Among others is “St. Joseph in Medi-

Who’s Who among Branigan scholars Jose Batista ’94, who specializes in Latin American poetry and Caribbean literature, has been an assistant professor of Spanish at the University of North Carolina-Charlotte since 2003. His work can be traced back to his time as a Branigan scholar when he studied Russian author Alexander Pushkin’s classic novel Eugene Onegin. “In retrospect, the Branigan experience gave me a taste of what scholarship meant and entailed,” he says. “Later on in life, before considering graduate school, my experience as a Branigan scholar cemented my decision to embark on a life of letters.” Michael Brady ’05, who wrote “The Unspoken Masses: Gender and Class in The Mask of Anarchy” for his Branigan Grant, heads the consulting firm Brady &amp; Company, which deals in state, federal and international government relations and development. Monica Cabarcas ’01, who used her Branigan Grant to research AIDS activism, was recently hired as a literacy specialist at Albermarle County Schools in Virginia. Since studying “Joyce’s Dublin: Fiction and Fact” for her Branigan Grant, Maureen Curtin ’91 has become a tenured associate professor of English at the State University of New York-Oswego. “I believe that more than anything, the Branigan was an apprenticeship in ideas that I could not have imagined otherwise,” she says. John easterbrook ’04 says, “My Branigan project gave me my first real glimpse into what life as an academic could be like.” After studying portrayals of men and women in Ernest Hemingway’s writing for his project, he completed his M.A. in English from New York University in May 2008 and taught a class in Manhattan’s English department this past spring. Easterbrook is currently working toward his Ph.D. Michael Fahey ’92 used his Branigan Grant to attend an intensive weeklong seminar on Law and Society at the Washington Center. “The experience fed my hunger for knowledge in the field of law and further fueled my desired career path,” he says. He currently lives in London and is the senior vice president, general counsel and company secretary at Affinion International, a leading global provider of marketing services and loyalty programs.

Chris Farley ’99 teaches history at Valhalla High School in Westchester County, N.Y. Previously, he attended Fordham University to earn a master’s degree in political science with a concentration in American politics. “I read differently, analyze differently and think differently because of the Branigan experience,” says Farley, who focused on capital punishment in the United States while at Manhattan. “I strive to pass some of what I have gained on to my students.” John Mark ’00 is captain in the U.S. Army JAG Corps stationed at Fort Huachuca, Ariz. He is a U.S. Army prosecutor and special assistant U.S. Attorney for the Southern District of Arizona. He was selected to be an instructor at the U.S. Army Military Intelligence School, where he will teach the Law of War and Interrogation. After graduating from St. John’s University School of Law in 2003, Mark returned to Manhattan to become director of residence life. The research on Cardinal Spellman that he did as part of his Branigan Grant helped him to learn about the interplay of religion and politics in New York. “Because of my involvement with the Branigan Grant, many other opportunities have opened for me,” he says. a ltagracia Pierre ’02, an attorney working on a double M.B.A. in taxation and accounting, has this to say about her Branigan research: “On a personal note, the project whose topic was ‘Oppression and the Struggle for Emancipation in Feminist Caribbean Literature’ helped me delve into many questions about my ethnicity. This journey into race and ethnicity for me has not ended, but the project was certainly a worthy beginning.” Courtney r oy ’08, who wrote “The Politics of Anger: A Study of Kinship in the Selected Plays of John Osborne and Tennessee Williams” from her comprehensive Branigan research, works at Oxford University Press. James Vreeland ’94 is associate professor of international relations in the Edmund A. Walsh School of Foreign Service at Georgetown University. “My research has taken me around the world — by the end of this year (2008), I will have presented my work in over a dozen countries on six continents,” he says. “And to think it all started with a Branigan Scholars Grant to do research in the island of Guadeloupe in the Caribbean!” 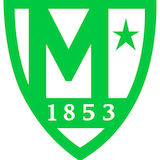