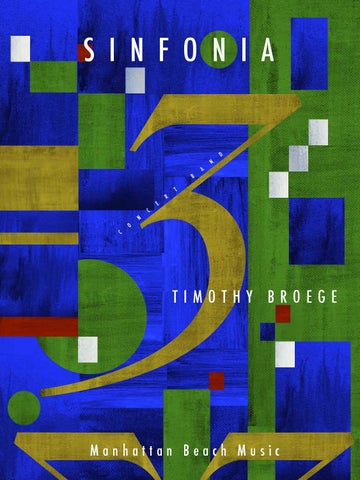 This virtual conductor score and recording are designated â&#x20AC;&#x153;private,â&#x20AC;? and any publication or distribution beyond the web sites of Manhattan Beach Music is prohibited

Commissioned by H. Robert Reynolds for the University of Wisconsin Wind Ensemble, SINFONIA III was premiered at Madison, Wisconsin in April of 1973. The work was composed during the Summer of 1972 at Brielle, New Jersey. Thanks to the advocacy of such distinguished conductors as Bob Reynolds, Eugene Corporon, and Jack Delaney, SINFONIA III has received many performances during the years since its premiere and has indeed become, alongside SINFONIA V , one of my most popular wind ensemble pieces. My father’s death in December of 1970 caused me to produce three works in which I paid tribute to his sweet soul and loving kindness. CHICAGO SONGS for piano and BENEDICTUS for mezzo soprano, tuba, and piano were both composed in 1971. SINFONIA III completes the tribute and, being more playful in nature, balances the seriousness of the previous two pieces. An earlier subtitle for the work was “Quodlibet à 25.” A Quodlibet is usually deﬁned as a succession of several tunes, often humorous, selected at the whim of the composer; and this work, in the form of a Quodlibet, contains both original materials (the opening Chaconne, the Stravinsky-ish Chorale, and the dance tunes, and Ragtime of the Rondeau), and quotations (Dowland’s lute song, “If My Complaints Could Passions Move,” and the 19th-century gospel hymn, “I Love to Tell the Story,” words by Catherine Hankey, tune by William G. Fischer), which represent the kinds of music that appealed to my father. For many years he served as superintendent of the Presbyterian Sunday School in Belmar, New Jersey, and “I Love to Tell the Story” was one of his favorite hymns. There are in SINFONIA III both light and shadow, both humor and seriousness, in an attempt to depict in sound, as much as I was able to do in the summer of 1972, something of the nature of this man who showered so much love upon his wife and four sons and enriched the lives of the many people who knew him.

1. The lid of the piano should be completely opened or removed. Piano and string bass constitute a continuo of sorts, and must be fully equal participants in the ensemble. 2. The singing in the concluding Polonaise need not be overly polished or professional. The desired eďŹ&#x20AC;ect is that of a small church congregation fervently singing a beloved hymn. A small unison chorus of 10â&#x20AC;&#x201C;12 voices may be added to supplement the singing of the instrumentalists, if desired. A mix of male and female voices is preferable, but there is no problem if one type of voice predominates. The words should at all times be clearly projected and dynamic balances may be adjusted as necessary. 3. An antiphonal seating plan is recommended: Woodwinds to the left, percussion in the center, piano and string bass in front of the percussion, brasses to the right [all as seen from the perspective of the audience]. If an optional chorus is used, these singers should sit interspersed with the instrumentalists and should remain seated throughout the piece. 4. Although intended for an ensemble of twenty-ďŹ ve players, SINFONIA III may be successfully performed by a larger ensemble with instrumental parts doubled as desired. However, if a larger ensemble is used, it is recommended that the number of string basses be increased to at least three so that proper balances are maintained.

When I composed S I N F O N I A I I I during the summer of 1972, I intended that the work be performed by an ensemble of twenty-ﬁve players consisting of winds, percussion, string bass and piano, one player to a part, with optional voices ad libitum. During the past twenty years, the piece has been performed many, many times [in its rental edition: Ed.], often by ensembles a good deal larger than what I had originally conceived, and I have often been asked if I would consider revising the work in terms of making it more useful for standard wind ensemble/concert band instrumentations. Accordingly, as Manhattan Beach Music’s director Bob Margolis and I discussed the preparations for the publication of the sale edition (at last!) of SINFONIA III , we agreed that optional parts for saxophones and euphonium should be provided. I want to point out that these optional parts contain no new harmonic, melodic or rhythmic material and are not necessary for successful performances of the piece. These optional parts serve to reinforce certain existing materials in the score and should prove useful when larger ensembles perform the work. However, I hope that from time to time conductors will undertake to perform the piece as I originally intended it, with an ensemble of twenty-ﬁve players, one player to a part, and thus without any recourse to the optional parts. Also note that the present edition provides the original C Trumpet parts, which should be used in such twenty-ﬁve player performances, and also the same parts transposed for Bb Trumpets, which are provided as the alternative of choice for concert band performances. As for extra singers, I say the more the merrier. As in most performances, the conductor most ultimately be the arbiter of balances and eﬀectiveness of execution. Nothing in the optional parts should be considered necessary, and conductors should feel free to omit such material from the optional parts as they see ﬁt. T I M OT H Y B RO E G E O C E A N P O R T, N E W J E R S E Y SEPTEMBER, 1992

Acidic paper has been in widespread use since the turn of the century, and has become the bane of archivists, librarians, and others who seek to preserve knowledge intact, because it literally will self-destruct as it ages. Some paper, only three or four decades old, already has become impossible to handle — so brittle it crumbles to the touch. Surely we do not want today’s music to be unavailable to those who will inhabit the future. If the music of the Renaissance had not been written on vellum it could never have been preserved and we would not have it today, some four hundred years later. Let us give the same consideration to the musicians in our future. It was with this thinking that Manhattan Beach Music in 1988 ﬁrst addressed the needs of the archivist by printing all of its concert band music on acid-free paper that met the standards speciﬁed in the American National Standard for Information Sciences — Permanence of Paper for Printed Library Materials (ANSI Z39.48-1984). The standard was revised on October 26, 1992 to include coated papers; all of our new editions and reprints of older editions meet this revised standard. With proper care and under proper environmental conditions, this paper should last for at least several hundred years.

Technical notes: Paper permanence is related to several factors: The acidity or alkalinity (pH) of the paper is perhaps the most critical criterion. Archival paper (also known as acid-free paper, alkaline paper, and permanent paper) is acid-free, has a pH between 7.5 and 10, is tear resistant, has an alkaline reserve equivalent to 2% calcium carbonate (to neutralize any acid that might arise from natural aging of the paper or from environmental pollution), and contains no unbleached pulp or groundwood (no more than 1% lignin by weight). The speciﬁc standards summarized here are set forth in detail by the National Information Standards Organization in American National Standard Z39.48-1992. For more information, contact: NISO, 4733 Bethesda Avenue, Suite 300, Bethesda, MD 20814, http://www.niso.org/