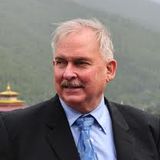 Christopher Benninger is one of India's highly decorated architects. His well known award winning projects are the Mahindra United World College of India, the Samundra Institute of Maritime Studies, the "Suzlon One Earth" world headquarters, the National Ceremonial Plaza at Thimphu, Bhutan, and his own studio and residence "India House" in Pune. Each project addresses the complex issues of design, context, climate, materials, sustainability, and technology, amidst the client's programmatic needs. Benninger studied urban planning at MIT and architecture at Harvard where he later taught. He settled in India in 1971 founding the School of Planning at Ahmedabad as a Ford Foundation Advisor where he continues as a Distinguished Professor. His name appears along side Geoffrey Bawa, Charles Correa and Balkrishna Doshi as one of the six recipients of the Great Master Architect Award in India presented every three years.