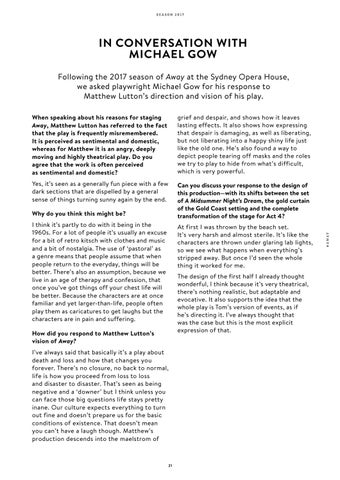 IN CONVERSATION WITH MICHAEL GOW

grief and despair, and shows how it leaves lasting effects. It also shows how expressing that despair is damaging, as well as liberating, but not liberating into a happy shiny life just like the old one. He’s also found a way to depict people tearing off masks and the roles we try to play to hide from what’s difficult, which is very powerful.

Yes, it’s seen as a generally fun piece with a few dark sections that are dispelled by a general sense of things turning sunny again by the end.

Can you discuss your response to the design of this production—with its shifts between the set of A Midsummer Night’s Dream, the gold curtain of the Gold Coast setting and the complete transformation of the stage for Act 4?

Why do you think this might be? I think it’s partly to do with it being in the 1960s. For a lot of people it’s usually an excuse for a bit of retro kitsch with clothes and music and a bit of nostalgia. The use of ‘pastoral’ as a genre means that people assume that when people return to the everyday, things will be better. There’s also an assumption, because we live in an age of therapy and confession, that once you’ve got things off your chest life will be better. Because the characters are at once familiar and yet larger-than-life, people often play them as caricatures to get laughs but the characters are in pain and suffering.

At first I was thrown by the beach set. It’s very harsh and almost sterile. It’s like the characters are thrown under glaring lab lights, so we see what happens when everything’s stripped away. But once I’d seen the whole thing it worked for me. The design of the first half I already thought wonderful, I think because it’s very theatrical, there’s nothing realistic, but adaptable and evocative. It also supports the idea that the whole play is Tom’s version of events, as if he’s directing it. I’ve always thought that was the case but this is the most explicit expression of that.

How did you respond to Matthew Lutton’s vision of Away? I’ve always said that basically it’s a play about death and loss and how that changes you forever. There’s no closure, no back to normal, life is how you proceed from loss to loss and disaster to disaster. That’s seen as being negative and a ‘downer’ but I think unless you can face those big questions life stays pretty inane. Our culture expects everything to turn out fine and doesn’t prepare us for the basic conditions of existence. That doesn’t mean you can’t have a laugh though. Matthew’s production descends into the maelstrom of

Following the 2017 season of Away at the Sydney Opera House, we asked playwright Michael Gow for his response to Matthew Lutton’s direction and vision of his play. 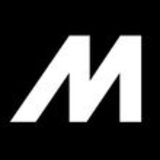