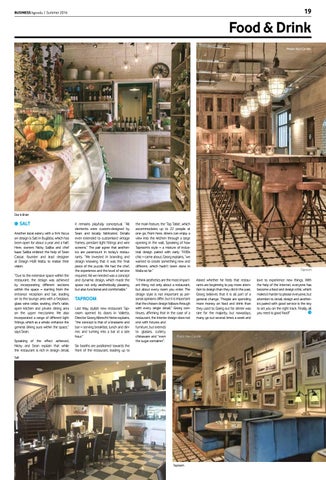 SALT Another local eatery with a firm focus on design is Salt in Bugibba, which has been open for about a year and a half. Here, owners Nicky Saliba and chef Isaac Saliba enlisted the help of Sean Cassar, founder and lead designer at Design HUB Malta, to realise their vision. “Due to the extensive space within the restaurant, the design was achieved by incorporating different sections within the space – starting from the entrance reception and bar, leading on to the lounge area with a fireplace, glass wine cellar, seating, chef’s table, open kitchen and private dining area on the upper mezzanine. We also incorporated a range of different light fittings, which as a whole, enhance the general dining aura within the space,” says Sean. Speaking of the effect achieved, Nicky and Sean explain that while the restaurant is rich in design detail,

it remains playfully conceptual. “All elements were custom-designed by Sean and locally fabricated. Details even extended to customised vintage frames, pendant light fittings and wire screens.” The pair agree that aesthetics are paramount in today’s restaurants. “We invested in branding and design knowing that it was the final piece of the puzzle. We had the chef, the experience and the level of service required. All we needed was a concept and dynamic design, which made the space not only aesthetically pleasing, but also functional and comfortable.”

TAPROOM Last May, stylish new restaurant Taproom opened its doors in Valletta. Director Georg Albrecht Heine explains, “the concept is that of a brasserie and bar – serving breakfast, lunch and dinner, and turning into a bar at a late hour.”

the main feature, the ‘Tap Table’, which accommodates up to 22 people at one go. From here, diners can enjoy a view into the kitchen through a large opening in the wall. Speaking of how Taproom’s style – a mixture of industrial design paired with early 1930s chic – came about, Georg explains, “we wanted to create something new and different, which hadn’t been done in Malta so far.” “I think aesthetics are the most important thing, not only about a restaurant, but about every room you enter. The design style is not important as personal opinions differ, but it is important that the chosen design follows through with every single detail,” Georg continues, affirming that in the case of a restaurant, the interior design does not end with fixtures and furniture, but extends to glasses, cutlery, chinaware and “even the sugar container”.

Six booths are positioned towards the front of the restaurant, leading up to

Asked whether he feels that restaurants are beginning to pay more attention to design than they did in the past, Georg believes that it is all part of a general change. “People are spending more money on food and drink than they used to. Going out for dinner was rare for the majority, but nowadays, many go out several times a week and

love to experience new things. With the help of the internet, everyone has become a food and design critic, which makes it harder to please everyone, but attention to detail, design and aesthetics paired with good service is the key to set you on the right track. Finally, all you need is good food!” 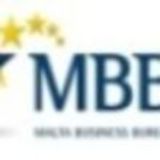