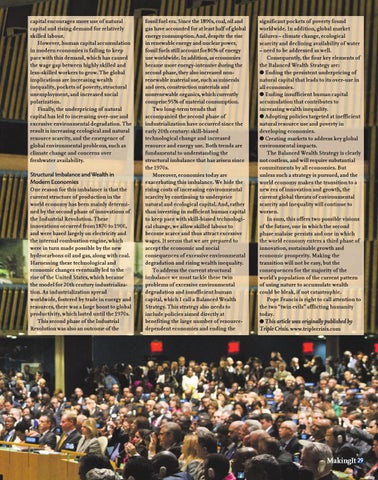 capital encourages more use of natural capital and rising demand for relatively skilled labour. However, human capital accumulation in modern economies is failing to keep pace with this demand, which has caused the wage gap between highly skilled and less-skilled workers to grow. The global implications are increasing wealth inequality, pockets of poverty, structural unemployment, and increased social polarization. Finally, the underpricing of natural capital has led to increasing over-use and excessive environmental degradation. The result is increasing ecological and natural resource scarcity, and the emergence of global environmental problems, such as climate change and concerns over freshwater availability.

Structural Imbalance and Wealth in Modern Economies One reason for this imbalance is that the current structure of production in the world economy has been mainly determined by the second phase of innovations of the Industrial Revolution. These innovations occurred from 1870 to 1900, and were based largely on electricity and the internal combustion engine, which were in turn made possible by the new hydrocarbons oil and gas, along with coal. Harnessing these technological and economic changes eventually led to the rise of the United States, which became the model for 20th century industrialization. As industrialization spread worldwide, fostered by trade in energy and resources, there was a large boost to global productivity, which lasted until the 1970s. This second phase of the Industrial Revolution was also an outcome of the

fossil fuel era. Since the 1890s, coal, oil and gas have accounted for at least half of global energy consumption. And, despite the rise in renewable energy and nuclear power, fossil fuels still account for 80% of energy use worldwide. In addition, as economies became more energy-intensive during the second phase, they also increased nonrenewable material use, such as minerals and ores, construction materials and nonrenewable organics, which currently comprise 95% of material consumption. Two long-term trends that accompanied the second phase of industrialization have occurred since the early 20th century: skill-biased technological change and increased resource and energy use. Both trends are fundamental to understanding the structural imbalance that has arisen since the 1970s. Moreover, economies today are exacerbating this imbalance. We hide the rising costs of increasing environmental scarcity by continuing to underprice natural and ecological capital. And, rather than investing in sufficient human capital to keep pace with skill-biased technological change, we allow skilled labour to become scarce and thus attract excessive wages. It seems that we are prepared to accept the economic and social consequences of excessive environmental degradation and rising wealth inequality. To address the current structural imbalance we must tackle these twin problems of excessive environmental degradation and insufficient human capital, which I call a Balanced Wealth Strategy. This strategy also needs to include policies aimed directly at benefiting the large number of resourcedependent economies and ending the

significant pockets of poverty found worldwide. In addition, global market failures – climate change, ecological scarcity and declining availability of water – need to be addressed as well. Consequently, the four key elements of the Balanced Wealth Strategy are: l Ending the persistent underpricing of natural capital that leads to its over-use in all economies. l Ending insufficient human capital accumulation that contributes to increasing wealth inequality. l Adopting policies targeted at inefficient natural resource use and poverty in developing economies. l Creating markets to address key global environmental impacts. The Balanced Wealth Strategy is clearly not costless, and will require substantial commitments by all economies. But unless such a strategy is pursued, and the world economy makes the transition to a new era of innovation and growth, the current global threats of environmental scarcity and inequality will continue to worsen. In sum, this offers two possible visions of the future, one in which the second phase malaise persists and one in which the world economy enters a third phase of innovation, sustainable growth and economic prosperity. Making the transition will not be easy, but the consequences for the majority of the world’s population of the current pattern of using nature to accumulate wealth could be bleak, if not catastrophic. Pope Francis is right to call attention to the two “twin evils” afflicting humanity today. l This article was originally published by Triple Crisis. www.triplecrisis.com 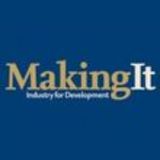 Steady prosperity has not been achieved throughout the world and there remain remarkable differences between and within regions, countries a...

Steady prosperity has not been achieved throughout the world and there remain remarkable differences between and within regions, countries a...