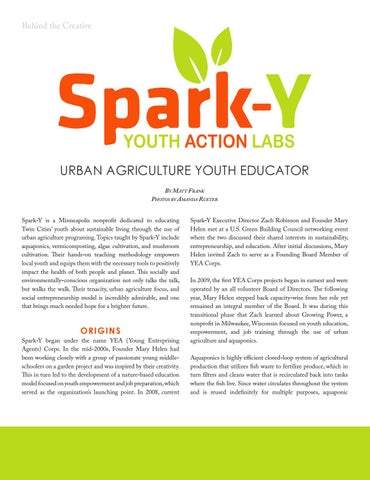 URBAN AGRICULTURE YOUTH EDUCATOR By Matt Frank Photos by Amanda Rueter Spark-Y is a Minneapolis nonprofit dedicated to educating Twin Citiesâ&#x20AC;&#x2122; youth about sustainable living through the use of urban agriculture programing. Topics taught by Spark-Y include aquaponics, vermicomposting, algae cultivation, and mushroom cultivation. Their hands-on teaching methodology empowers local youth and equips them with the necessary tools to positively impact the health of both people and planet. This socially and environmentally-conscious organization not only talks the talk, but walks the walk. Their tenacity, urban agriculture focus, and social entrepreneurship model is incredibly admirable, and one that brings much needed hope for a brighter future.

Spark-Y began under the name YEA (Young Enterprising Agents) Corps. In the mid-2000s, Founder Mary Helen had been working closely with a group of passionate young middleschoolers on a garden project and was inspired by their creativity. This in turn led to the development of a nature-based education model focused on youth empowerment and job preparation, which served as the organizationâ&#x20AC;&#x2122;s launching point. In 2008, current

Spark-Y Executive Director Zach Robinson and Founder Mary Helen met at a U.S. Green Building Council networking event where the two discussed their shared interests in sustainability, entrepreneurship, and education. After initial discussions, Mary Helen invited Zach to serve as a Founding Board Member of YEA Corps. In 2009, the first YEA Corps projects began in earnest and were operated by an all volunteer Board of Directors. The following year, Mary Helen stepped back capacity-wise from her role yet remained an integral member of the Board. It was during this transitional phase that Zach learned about Growing Power, a nonprofit in Milwaukee, Wisconsin focused on youth education, empowerment, and job training through the use of urban agriculture and aquaponics. Aquaponics is highly efficient closed-loop system of agricultural production that utilizes fish waste to fertilize produce, which in turn filters and cleans water that is recirculated back into tanks where the fish live. Since water circulates throughout the system and is reused indefinitely for multiple purposes, aquaponic