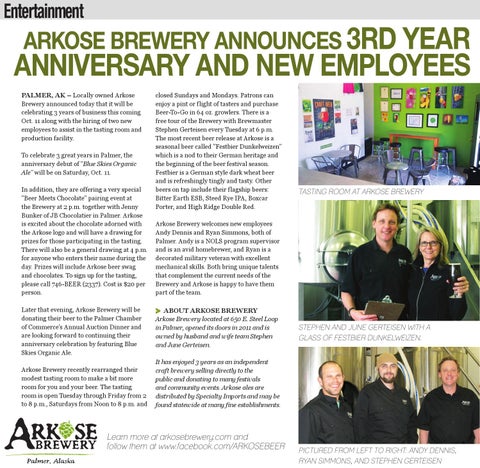 Anniversary and New Employees Palmer, AK â&#x20AC;&#x201C; Locally owned Arkose Brewery announced today that it will be celebrating 3 years of business this coming Oct. 11 along with the hiring of two new employees to assist in the tasting room and production facility. To celebrate 3 great years in Palmer, the anniversary debut of "Blue Skies Organic Ale" will be on Saturday, Oct. 11. In addition, they are offering a very special "Beer Meets Chocolate" pairing event at the Brewery at 2 p.m. together with Jenny Bunker of JB Chocolatier in Palmer. Arkose is excited about the chocolate adorned with the Arkose logo and will have a drawing for prizes for those participating in the tasting. There will also be a general drawing at 4 p.m. for anyone who enters their name during the day. Prizes will include Arkose beer swag and chocolates. To sign up for the tasting, please call 746-BEER (2337). Cost is $20 per person. Later that evening, Arkose Brewery will be donating their beer to the Palmer Chamber of Commerce's Annual Auction Dinner and are looking forward to continuing their anniversary celebration by featuring Blue Skies Organic Ale. Arkose Brewery recently rearranged their modest tasting room to make a bit more room for you and your beer. The tasting room is open Tuesday through Friday from 2 to 8 p.m., Saturdays from Noon to 8 p.m. and

closed Sundays and Mondays. Patrons can enjoy a pint or flight of tasters and purchase Beer-To-Go in 64 oz. growlers. There is a free tour of the Brewery with Brewmaster Stephen Gerteisen every Tuesday at 6 p.m. The most recent beer release at Arkose is a seasonal beer called "Festbier Dunkelweizen" which is a nod to their German heritage and the beginning of the beer festival season. Festbier is a German style dark wheat beer and is refreshingly tingly and tasty. Other beers on tap include their flagship beers: Bitter Earth ESB, Steed Rye IPA, Boxcar Porter, and High Ridge Double Red.

Arkose Brewery welcomes new employees Andy Dennis and Ryan Simmons, both of Palmer. Andy is a NOLS program supervisor and is an avid homebrewer, and Ryan is a decorated military veteran with excellent mechanical skills. Both bring unique talents that complement the current needs of the Brewery and Arkose is happy to have them part of the team.

Arkose Brewery located at 650 E. Steel Loop in Palmer, opened its doors in 2011 and is owned by husband and wife team Stephen and June Gerteisen.

Stephen and June Gerteisen with a glass of Festbier Dunkelweizen.

It has enjoyed 3 years as an independent craft brewery selling directly to the public and donating to many festivals and community events. Arkose ales are distributed by Specialty Imports and may be found statewide at many fine establishments. 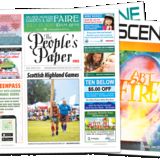