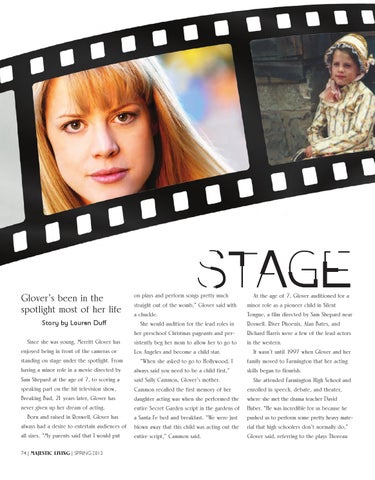 Glover’s been in the spotlight most of her life Story by Lauren Duff Since she was young, Merritt Glover has enjoyed being in front of the cameras or standing on stage under the spotlight. From

on plays and perform songs pretty much

At the age of 7, Glover auditioned for a

straight out of the womb,” Glover said with

minor role as a pioneer child in Silent

Tongue, a film directed by Sam Shepard near

She would audition for the lead roles in

her preschool Christmas pageants and per-

Richard Harris were a few of the lead actors

sistently beg her mom to allow her to go to

Los Angeles and become a child star. “When she asked to go to Hollywood, I

having a minor role in a movie directed by

always said you need to be a child first,”

Sam Shepard at the age of 7, to scoring a

Cammon recalled the first memory of her

enrolled in speech, debate, and theater,

daughter acting was when she performed the

where she met the drama teacher David

never given up her dream of acting.

entire Secret Garden script in the gardens of

Huber. “He was incredible for us because he

Born and raised in Roswell, Glover has

a Santa Fe bed and breakfast. “We were just

pushed us to perform some pretty heavy mate-

always had a desire to entertain audiences of

blown away that this child was acting out the

all sizes. “My parents said that I would put

skills began to flourish. She attended Farmington High School and

Celebrating the Lifestyle, Community and Culture of the Four Corners! 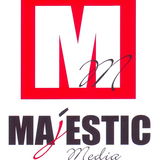