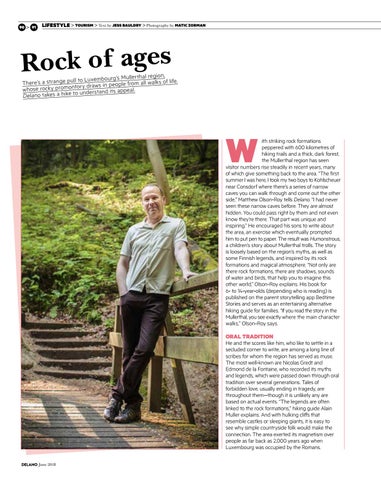 al region , Luxembourg’s Mullerth There’s a strange pull tory draws in people from all walks of life. whose rocky promontounderstand its appeal. Delano takes a hike to

ith striking rock formations peppered with 600 kilometres of hiking trails and a thick, dark forest, the Mullerthal region has seen visitor numbers rise steadily in recent years, many of which give something back to the area. “The first summer I was here, I took my two boys to Kohlscheuer near Consdorf where there’s a series of narrow caves you can walk through and come out the other side,” Matthew Olson-Roy tells Delano. “I had never seen these narrow caves before. They are almost hidden. You could pass right by them and not even know they’re there. That part was unique and inspiring.” He encouraged his sons to write about the area, an exercise which eventually prompted him to put pen to paper. The result was Humonstrous, a children’s story about Mullerthal trolls. The story is loosely based on the region’s myths, as well as some Finnish legends, and inspired by its rock formations and magical atmosphere. “Not only are there rock formations, there are shadows, sounds of water and birds, that help you to imagine this other world,” Olson-Roy explains. His book for 6- to 14-year-olds (depending who is reading) is published on the parent storytelling app Bedtime Stories and serves as an entertaining alternative hiking guide for families. “If you read the story in the Mullerthal, you see exactly where the main character walks,” Olson-Roy says.

ORAL TRADITION He and the scores like him, who like to settle in a secluded corner to write, are among a long line of scribes for whom the region has served as muse. The most well-known are Nicolas Gredt and Edmond de la Fontaine, who recorded its myths and legends, which were passed down through oral tradition over several generations. Tales of forbidden love, usually ending in tragedy, are throughout them--though it is unlikely any are based on actual events. “The legends are often linked to the rock formations,” hiking guide Alain Muller explains. And with hulking cliffs that resemble castles or sleeping giants, it is easy to see why simple countryside folk would make the connection. The area exerted its magnetism over people as far back as 2,000 years ago when Luxembourg was occupied by the Romans. June 2018