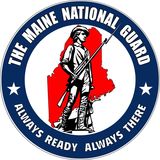 Like Maine itself, the Maine National Guard has the distinction of having existed as an organization prior to the existence of the United States itself. Maine was often at the frontlines of American history. As a consequence, Maine developed a population of strong-willed, independent, and innovative men and women.

These men and women have always stepped forward to defend home and hearth, from 1642 until this very day.