The Seen and the Unseen 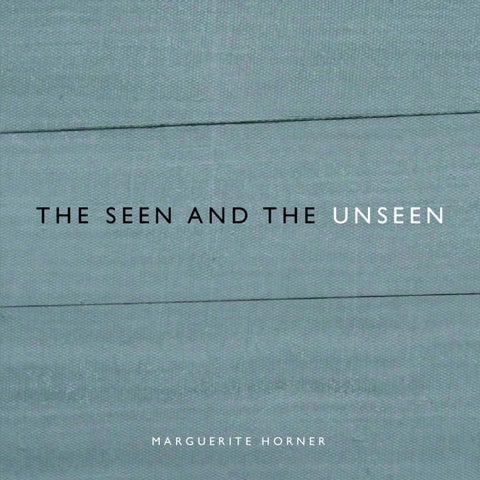 THE SEEN AND THE UNSEEN

The Seen and the Unseen Paintings by Marguerite Horner

My practice is concerned with the non-material, a reality we can access through contemplation and painting.

Today the moving image dominates our world and whilst visually powerful in so many respects, it denies us the opportunity for stillness and reflection. The value of a painting lies in its ability to induce a contemplative state in the viewer. As Walter Benjamin says &#39;before it the spectator can abandon himself to his associations.&#39; For me, the value of contemplation lies in its ability to reconcile the heart and the mind into one. I&#39;m inspired by Merleau-Ponty&#39;s observation that it is &#39;precisely because painting does not â&amp;#x20AC;&amp;#x2DC;copyâ&amp;#x20AC;&amp;#x2122; things, and because it does not offer things to thought as does science but presents them immediately and bodily, in their depth and movement, that painting gives a true sense of the world and what it means to see it.&#39;

Through my work I&#39;m interested in enquiring into the ways in which man may be related to the infinite. Upon the framework of this enquiry my paintings aim to investigate, amongst other things, notions of transience, intimacy, loss and hope. I use the external world as a trigger or metaphor for these experiences? and through a period of gestation and distillation, I make a series of intuitive decisions that lead the work towards completion. A few years ago a stay in New York and Long Island was characterised by an intense period of recording image. My latest body of work was triggered and has subsequently emerged from that.

If you could say it in words, there would be no need to paint. What I wanted to do was to paint sunlight on the side of a house.

Both remarks are from the revered painter of isolation, alienation and loneliness, making for the spectator poetry out of banality: the American Edward Hopper, (1882-1967). He was the seeker of scenes both in the countryside of New England and in big cities, from hotel rooms to those white framed colonial houses dappled with cool sunlight. Marguerite Horner’s paintings are both vastly different but obliquely refer to these 20th and 21st century preoccupations, so that Hopper’s stance and commitment seem resonant and relevant. Above all, Horner’s vision takes the ordinary, and makes of it something elusive, subtle, haunting, poetic: things we all see but pass by. This is done without a sharp focus searchlight, but in tones and hues of the softest of misty colours, that elusive look before the sun has burnt through, with a very occasional almost shocking blue and even red as startling punctuation. But it is the modulated grey sky, the ranges of cool whites which dominate. One title is In the Middle of Nowhere, but Horner reminds us that nowhere is always somewhere. Above all her paintings leave such room for the reflections of the viewer’s imagination, space for us to respond. She does not tell, she shows.

The subject matter of Marguerite Horner’s paintings, almost all in her characteristic beguiling and fascinatingly subtle gradations of silvery greys, are based on scenes glimpsed in small towns, occasional big cities, and rarely an excursion into nature, or rather, a segment of wooded landscape, the kind of wood that is on the edge of the road, where you might park your car and venture for a moment. There are isolated houses, parking lots, and several scenes are delineated, framed, marked by sequences of electrical or telephonic wires and poles and fences at verticals or diagonals. It is as though the spectator were looking through to the scene beyond. These lines in space, and occasionally wintry trees their branches stripped of leaves, subtly anchor the solidity of houses and tangles of tree trunks. Human presences occasionally obtrude, even intrude, but equally may be as essential and as rock solid as the buildings, roads and cars of the townscape. Edward Hopper again: My aim in painting has always been the most exact transcription possible of my most intimate impression of nature.

Hopper, eloquent yet reticent, speaks for many artists. By nature he too meant the manmade, the environment people inhabit. But vision is transmuted always individually. And it is the individual aspect of Horner’s paintings that capture the eye. The resemblance to any other artist is illusory and superficial, although of course a sense both of the history of art and design informs her work. It is much more a sense of a shared mood, a profound commitment, and an extraordinary tenacity and determination. Professionally, when starting out after her initial degree, Marguerite received further specialist training for what to lay people must seem an arcane preoccupation, currently

transformed and changed beyond recognition in the digital age, but then absolutely hand done: she became a scene painter for BBC television, no stranger to the transformative qualities of paint, and to the art of illusion. She had a further career as the visual collaborator with photographers and the print media, a scene setter herself. Through these years she expanded a special understanding both of actual materials and of compositions, and of how visual messages were communicated. Then, briefs were set; now she sets her own. But she has spoken of the very nature of understanding the actual materiality of paint, on large and small scale, that these years amplified for her, not to mention the understanding of arrangements and installations. It speaks to the confident understructure of her compositions: and compositions they are. Yet the profound difference is of course that here compositions are dictated by Marguerite’s mind’s eye, the individual gaze, with no collaboration with extrinsic demands. Her current imagery is based on her own photographs mostly taken during a prolonged stay in Long Island and New York. The more one looks at photographs, whether analogue or digital, one realises that the mechanics are just the beginning, the medium so to speak, as paint is; what matters, totally crucial, is the eye behind the camera.

Many of Marguerite’s images are captured as though the photographer was rooted to the ground; others from a slightly elevated point of view (subliminally reminiscent of late 19th century townscapes, from first or second story windows) and some taken through the windows of commuter trains. Small town America has a long lineage of examination not only through art but through literature, sometimes celebrated even sentimentalised, as in Thornton Wilder’s Our Town, sometimes the subject of tragedy, and sometimes as in the clusters of suburbia and commuter towns, a sense of emptiness, of lives lived elsewhere. Most people live in conurbations, but the myth of the small town, the village, remains strong, and particularly perhaps in America with its folk memory of New England town meetings, of early participatory democracy. And now these shells of emptiness dominate, the stuff of thrillers – Harlan Coben comes to mind – of places from which to escape. The fact that we recognise Marguerite Horner’s current subject matter is itself a tribute to the myth, and we recognise these scenes as backdrops to seemingly invisible lives, emotional lives, as sets if you like, sets created by myriad hands through time, and in many ways drained of life. These townscapes, and landscapes, and isolated houses with a play of light like Magritte – night glowing into day – are both concrete (although not necessarily reassuringly so) and insubstantial, almost like dreams. Yet verbal descriptions can all too easily make Marguerite Horner’s paintings sound commonplace. The subjects may deliberately partake of the substance of the day to day: but the artist’s dexterity of hand, designer’s eye and heartfelt imagination lift the ordinary into the extraordinary, and the specific into the universal. As her title for this current exhibition says, these paintings are about the seen and the unseen, the life behind the eye as well as the life in front of it. Marina Vaizey CBE, 2012

Lady Vaizey CBE is an art critic and author, formerly Art Critic for the Financial Times and Sunday Times and editor of the Art Quarterly and Review. She has written several books on art and also has been a judge for the Turner Prize.

‘In the Middle of Nowhere’

The Seen and the Unseen 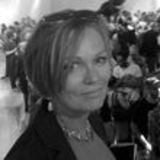