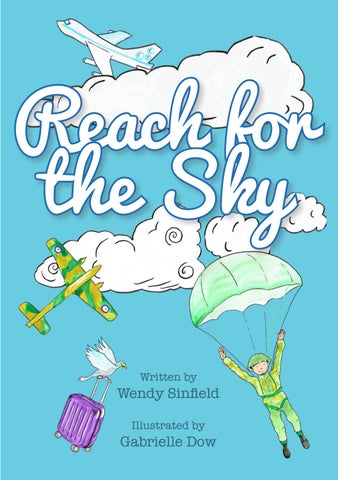 Reach for the Sky Written by

Dear Reader! I hope that you will enjoy this Manchester Airport 80th birthday book. Here at Manchester Airport we love birthdays and we want to celebrate this special year with people who live near to us and use our airport. So I am delighted to give this book to you as a gift from all of us here and very much hope that you will enjoy reading it. We want to make our airport better for everyone and we are working hard on a special project to build a new terminal for passengers of the future. The first part of our new extension opens in 2019 and there will be a much bigger super terminal in 2020. We look forward to meeting you all there. Best wishes,

Chapter 1 Reach for the Sky Page 1

Chapter 4 All Around the World Page 17

Just for fun there is something about travelling hidden on each page. Can you find where each item is hiding?

With special thanks to Year 6 pupils from Ringway Primary School for creating the back cover artwork.

Reach for the Sky

Adam was excited to go to school. He was up early and guzzled down his breakfast. Today was Grandparents Day and his grandad was coming in to school to talk about being in WWII. “Come on Mum,” he shouted, “We mustn’t be late today - I want to be first there to welcome Grandad!” Mum laughed, “this makes a change. It’s usually me chasing you!” 1

Adam ran all the way to school, not stopping once. His mum was panting behind him, trying to keep up. Adam ran straight into the classroom and even forgot to say goodbye to his mum. After registration grandad strode into the classroom. Adam sat up proudly as Miss Atherton introduced his Grandad to the other children.

Grandad told the children that in the war he had joined the British army as part of the parachute team. They had landed behind enemy lines in France!

Grandad had learned at the Parachute Training School at Manchester Airport. He knew how to put on his parachute, how to jump out of the aeroplane and most importantly, how to land safely! 3

As part of his training, he had practised jumping out of aeroplanes and landing safely in the fields at Tatton Park. This was top secret! Even his mum had not known he was learning so close to home. The children in Adamâ&amp;#x20AC;&amp;#x2122;s class had been to Tatton Park on a school trip. Grandad had never even been in an aeroplane before joining the army but he had loved every moment, especially the take off!

After the war Grandad came back home to live in Manchester. He really wanted to work at the airport and found a job there. His new job was to greet passengers from all over the world and speak to everyone on the loud speakers in different languages, â&amp;#x20AC;&amp;#x153;Hello, Bonjour, Hallo!â&amp;#x20AC;?

Did you know that Manchester Airport opened in

Did you know that

Did you know that Manchester Airport used to be called Ringway Airport?

Adam’s class loved hearing about all the exciting things that grandad had done and at break time they played acting out some of his adventures. Adam told them, “When I am a grown up, I am going to fly a plane, just like my grandad!” and all of his friends cheered. 7

When Adam was eight he was given a bike for his birthday present. He was soon an expert rider, speeding along and cycling for miles. One day his dad took him on a cycle ride to the Viewing Park at Manchester Airport to watch the aeroplanes. Adam loved watching the planes take off and land and spent all of his pocket money to buy a model aircraft to keep in his bedroom.

Adam still wanted to be a pilot. He went to school every day and tried his very best in all of his lessons. He always did his homework, even when he didnâ&amp;#x20AC;&amp;#x2122;t feel like it. 8

When he left school Adam joined a Flight Training School. He learned all about engines and how to navigate. He even learned how to fly a plane. It was exciting but also hard! After a few years Adamâ&amp;#x20AC;&amp;#x2122;s big dream came true and he became a qualified pilot!

Adam’s mum and grandad went to see him get his certificate. “Well done Adam,” beamed Grandad, “We are so proud. You had a dream and you worked hard and you made it come true.” Adam hugged them and inside he glowed with happiness.

Did you know that Manchester Airport is as big as more

Did you know that Manchester Airport has two runways? One of them

Did you know Manchester Airport has a Visitor Park where you can see lots of old aircraft and watch the planes? Itâ&amp;#x20AC;&amp;#x2122;s great fun!

A New Journey takes off!

Joanna was so excited today. She ate her breakfast quickly and ran upstairs to clean her teeth. Joanna’s dad was coming in to school as a special visitor to talk about his job. “Come on Dad!” shouted Joanna, “Lets go!” Joanna grabbed her reading bag and lunch box and waited by the door. 13

Joanna ran all the way to school, not stopping once. Her dad was bright red and panting behind her, trying to keep up! Joanna and her dad walked into the classroom together. Joanna was so proud of her dad, who looked very smart in his uniform. Mrs Akram introduced Joanna’s dad to the class. “Good morning Year 5 please welcome your special visitor Captain Adam Williams. As some of you already know Captain Adam is Joanna’s dad and he is a pilot.” The class gasped with wonder. 14

flights take off and land at Manchester Airport every year?

Did you know that Manchester Airport has flights to over 220 destinations?

All Around the World

Captain Adam flies aircraft from Manchester Airport to places all around the world. He has made friends in New York, Mumbai, Dubai, Barcelona and even Beijing! 17

At break time the children went outside to play. Everybody was pretending to be pilots in the playground, running around with their arms out. â&amp;#x20AC;&amp;#x153;When I grow up, I want to be a pilot just like my Dad!â&amp;#x20AC;? Joanna shouted proudly to all her friends. 21

Seb, one of Joanna’s classmates, stopped running around and looked at her strangely. “Can a girl really be a pilot?” he asked. Joanna turned and stared at him, “I can be whatever I want to be and nothing is going to stop me, EVER!” “Wow, I’d like to be a pilot too, one day!” said Seb and everyone cheered. 22

So Joanna went on running and playing and laughing and working and dreaming. And she never gave up! The End ...but really, this is just the beginning. 23

Which job would you choose?

Did you know that all of our electricity comes from renewable sources? Did you know that as part of the Runway 2 work, Did you know archaeologists that Manchester found an amazing Airport has its prehistoric own fire service? settlement site? Their seven fire engines carry 86,000 litres of water between them!

How many did you find? Did you find all of these hidden in the book? PASSPORT

See you soon and reach for the sky! 28

Reach for the Sky 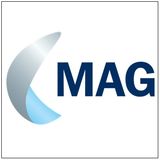