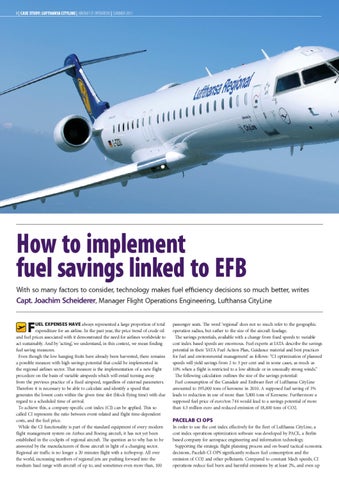 uel expenses have always represented a large proportion of total expenditure for an airline. In the past year, the price trend of crude oil and fuel prices associated with it demonstrated the need for airlines worldwide to act sustainably. And by ‘acting’, we understand, in this context, we mean finding fuel saving measures. Even though the low hanging fruits have already been harvested, there remains a possible measure with high savings potential that could be implemented in the regional airlines sector. That measure is the implementation of a new flight procedure on the basis of variable airspeeds which will entail turning away from the previous practice of a fixed airspeed, regardless of external parameters. Therefore it is necessary to be able to calculate and identify a speed that generates the lowest costs within the given time slot (block flying time) with due regard to a scheduled time of arrival. To achieve this, a company-specific cost index (CI) can be applied. This so called CI represents the ratio between event-related and flight time-dependent costs, and the fuel price. While the CI functionality is part of the standard equipment of every modern flight management system on Airbus and Boeing aircraft, it has not yet been established in the cockpits of regional aircraft. The question as to why has to be answered by the manufacturers of those aircraft in light of a changing sector. Regional air traffic is no longer a 20 minutes flight with a turboprop. All over the world, increasing numbers of regional jets are pushing forward into the medium haul range with aircraft of up to, and sometimes even more than, 100

passenger seats. The word ‘regional’ does not so much refer to the geographic operation radius, but rather to the size of the aircraft fuselage. The savings potentials, available with a change from fixed speeds to variable cost index based speeds are enormous. Fuel experts at IATA describe the savings potential in their ‘IATA Fuel Action Plan, Guidance material and best practices for fuel and environmental management’ as follows: “CI optimization of planned speeds will yield savings from 2 to 3 per cent and in some cases, as much as 10% when a flight is restricted to a low altitude or in unusually strong winds.” The following calculation outlines the size of the savings potential: Fuel consumption of the Canadair and Embraer fleet of Lufthansa CityLine amounted to 195,000 tons of kerosene in 2010. A supposed fuel saving of 3% leads to reduction in use of more than 5,800 tons of Kerosene. Furthermore a supposed fuel price of euro/ton 744 would lead to a savings potential of more than 4.3 million euro and reduced emission of 18,400 tons of CO2.

Pacelab CI OPS In order to use the cost index effectively for the fleet of Lufthansa CityLine, a cost index operations optimization software was developed by PACE, a Berlin based company for aerospace engineering and information technology. Supporting the strategic flight planning process and on-board tactical economic decisions, Pacelab CI OPS significantly reduces fuel consumption and the emission of CO2 and other pollutants. Compared to constant Mach speeds, CI operations reduce fuel burn and harmful emissions by at least 2%, and even up 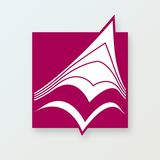