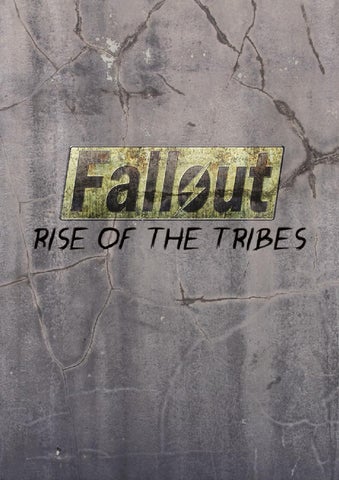 Build Dice The blue Build Dice are the workers trying to improve the area your tribe resides in. It can be by constructing things, by training to use weapons, or maybe by changing the social politics of the tribe.

Fallout: Rise of the Tribes - game rules The Story The world has ended in a nuclear apocalypse, and now the rebuilding begins. Each player controls a small group of survivors trying to build a new civilization; either by eliminating competition or by destroying the huge threat against humanity: the mutants.

1. Game Overview About the game Each turn you roll dice in order to draw cards, develop your civilization, attack the other tribes, and/or do some mutant smackdown. You win the game by eliminating the other players or by being the first to smack down the mutants so thoroughly that all the other tribes bow down before you. Content

5 Player mats for tracking information about your tribe. 53 cards representing technology and knowledge you can discover and develop your tribe with.

Ressource - 1 ressource of any kind. Can be used to build cards.

12 dice in three different colours representing the resources you have available to your tribe. 5 Paper clips for tracking information on your tribe.

Military Dice Black Military Dice represent the soldiers you send out to conquer other tribes or to defend against the rampaging mutant hordes or maybe even beat them. Military Dice can also anger the mutants and make them attack.

6 Victory point cubes. 2 cards with Mutant Tracks 1 Mutant tokens Component overview The Dice The dice are used to accomplish things during the game. Sometimes, however, they can also make bad things happens. The game comes with three different sets of dice, and each turn you get to roll two different kinds. Picking the right dice sets at the right moment is crucial. Exploration Dice These (red) dice represent brave scouts you send out to investigate nearby ruins for artefacts and knowledge that can help your tribe, to deal out some mutant smackdown along the way. Mutants - Add two tokens to the Mutant Attack Pool. Ressource - 1 ressource of any kind. Can be used to build cards. 3 x Exploration - Draw one card.

Mutant Smackdown - if you have five, you gain one victory point.

Mutant - Add one token to the Mutant Attack Pool. 2xMutant Defense - Prevents one mutant damage during your turn. Mutant Smackdown - if you have five, you gain one victory point. 2xAttack - Deals one damage to the opponent on your left.

The Mutants The mutants are a dangerous threat to humanity, and each turn they can grow restless enough to attack. All dice can generate mutant activity (by adding cubes to the Mutant Attack Pool), but rummaging around in the ruins with Exploration Dice especially runs the risk of angering them. When the mutant attack, they attack all players at the same time. 2

The Cards The cards represent things you find in the ruins and can somehow use in your tribe. Each card will grant you a specific bonus, but before you can use them, you have to build them with resources generated by your dice. You keep the cards you draw hidden in your hand until you build them after which you can use the effect.

Setup Each player rolls the red and green dice and the player with the most mutants become the first player. The first player starts with 20 Population, the second (going clockwise) 21 and so on. If you want, now is the time to give your tribe a cool name. Take the Mutant Track card corresponding to the number of players and place a token on the start space.

Card layout The reources needed to build the card. means you can use any resource Effect. This card allows you to prevent two Damage caused against you by another player. Flavour text. Has no game effect.

Cards marked with an arrow are discarded after use.

“Building” Cards Since the cards can be books, weapons, items, and/or ideas, “build” should be understood figuratively. You don’t as such build an Assault Rifle, but maybe by finding one you spend time learning how to build enough to equip your soldiers. And you don’t build Plato’s The State either, but by using resources you implement thoughts from the book into the way you govern your tribe. Player Mats Each player has a mat showing his current Population and the cards that he’s added to his tribe. The player mat also shows what types of cards you can build. There are only two spots for each type of card, and if you want to build something you don&#39;t’ have room for, you’ll have to discard an already built card first. Simply place it in the discard pile. Mutant Tracks Included are two cards used to track when the mutants attack. Which card to use depends on the number of players (se Setup below.

Give each player two start cards (Palisades and Training) and place the remaining start cards back in the box. Start cards form the players starting hands and are treated like all other cards. The only other difference being that if they are ever discarded, remove them from play. Shuffle the rest of the cards to form the Exploration Deck. Reveal the top three and place them in a line in front of the deck. This is the Offer. When drawing cards during your turn, you may take exactly one card from the Offer. Starting the Game The first player starts by taking a turn, then proceed clockwise around the table to the second player, and so on. The game continues until a player wins. A Game Turn A game turn consists of the following steps: Refresh - Roll - Resolve Refresh Refresh the Offer. Reveal cards from the Exploration Deck and add them to the Offer until there are three face up cards. Then refresh your exhausted cards. Se Cards below for more info on when to exhaust cards. If the Exploration Deck runs out of cards, shuffle the discard pile and form a new Exploration Deck. Roll Choose which two different sets of four matching dice you want to roll. Roll all eight dice the first time. First reroll. You may reroll any or all dice of one kind. Second reroll. As above. You may reroll the same dice as in the prior step, or a new kind. At any time you may use cards that give you rerolls or allow you to place dice on a specific result. However, you may not change your dice after you’ve advanced to the next step.

Goal of the game The goal of the game is to reduce every other player to zero Population or to gain two Victory Points. The first player to reach two VPs or the last player standing immediately wins the game. In the rare case that the last remaining players are eliminated at the same time, all players lose. All hail our new mutant overlords. 3

Resolve Dice must be resolved in the following order. A - Mutants For each Mutant, move one Mutant Token to the middle of the table (the Mutant Attack Pool). When all Mutant Tokens are in the middle of the table, the mutants deal three damage to ALL players. If you have any shields (from cards and/or dice), subtract those from the damage. Then place the tokens back next to the Exploration Deck, and DO NOT resolve any remaining Mutant results (the mutants attack at the most once each turn.) If you are killed by the mutants, skip the rest of your turn. B - Mutant Smackdown If you have 5 or more Mutant Smackdown on dice and/or cards, gain one victory point - take a token to remember this. If you have two victory points, you immediately win the game. You cannot save Mutant Smackdown from you dice from one turn to the next so if you do not have 5 or more, they have no effect. You may only gain at most one VP during a single turn.

3. Other Rules Defeat If you are ever at zero Population, you have been defeated. Discard all your cards including the ones in front of you (start cards are removed from the game). If you are eliminated as a result of a mutant attack in your own turn, you lose the rest of the turn. Defeating Another Player If, when attacking, you defeat another player you gain 1 Population as the remainder of the tribe is assimilated into yours. If you deal more Damage than is needed to defeat a player, you cannot then attack the new player on your left. You do not gain a bonus when the mutants defeat another player. Using Cards Cards break the normal game rules. In case a card contradicts the normal rules, the card takes precedence.

You may use a card immediately when you have built it. Some cards give you a permanent benefit (such as deC - Attack fense against attacks from other players and/or mutants), If you have at least one attack symbol on your dice, you deal damage to the player on your left. You may add any whereas others have to be either Exhausted (turn them sideways) or discarded (if it has an arrow in the lower bonus(es) from your cards to this attack, but you cannot attack just with symbols gained from cards. Attacking with right corner). dice is mandatory - using cards isn’t. Some cards may be used during another players turn (cards providing defense are the obvious example), but D - Build you cannot influence the dice during another players turn You may build any number of cards from your hand as unless a card specifically allow it. Cards are refreshed in long as you have matching dice and room on your tribe sheet. Place the card(s) you build face up on an appropri- the beginning of your turn. ate slot on the sheet. You may discard a card to make room for a new card. When building you may discard three cards from your hand instead of paying any one resource, but only if you also spend at least one die. E - Exploration For each Exploration you may draw a card. One of these cards may be from the Offer. The Offer is replenished at the beginning of the next player’s turn. There is no hand limit. F - End turn Pass all dice to the next player. Example: Max rolls the Exploration and Build dice. His Build dice don’t get him exactly what he needs, but the Exploration dice are worse showing three Mutant Smackdown and one Exploration. So he rerolls the three Exploration dice showing Smackdown with his first reroll. Unfortunately he rolls three double mutants meaning that the mutants will attack. He doesn’t want this so he has to reroll some of his Exploration dice with the second reroll.

Often overlooked rules - If you do not have five Mutant Smackdown from cards and/or dice during your turn, Mutant Smackdown has no effect. The mutants are not afraid of a kerfuffle, but need to be seriously smacked down for it to have an effect. - You may discard three cards from your hand to gain one resource of your choice when building, but only if you also use resources from the dice. - Mutants are not stopped by normal defenses. Only shields will stop them. - When rerolling, you may only reroll one kind of dice. Credits: Game design: Mads Brynnum Layout: Nick Larsen Contact: brynnum@gmail.com

Rules for the dice game Fallout: Rise of the Tribes. Fastaval 2015 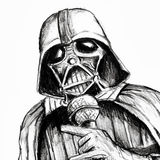