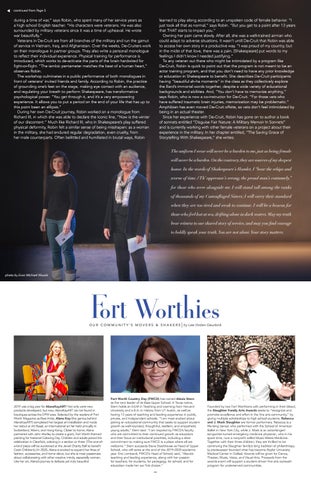 during a time of war,” says Robin, who spent many of her service years as a high school English teacher. “His characters were veterans. He was also surrounded by military veterans since it was a time of upheaval. He wrote war beautifully.” Veterans in De-Cruit are from all branches of the military and run the gamut of service in Vietnam, Iraq, and Afghanistan. Over the weeks, De-Cruiters work on their monologue in partner groups. They also write a personal monologue to reflect their individual experience. Physical training for performance is introduced, which works to de-activate the parts of the brain hardwired for fight-or-flight. “The iambic pentameter matches the beat of a human heart,” observes Robin. The workshop culminates in a public performance of both monologues in front of veterans’ invited friends and family. According to Robin, the practice of grounding one’s feet on the stage, making eye contact with an audience, and regulating your breath to perform Shakespeare, has transformative psychological power. “You get through it, and it’s a very empowering experience. It allows you to put a period on the end of your life that has up to this point been an ellipsis.” During her own De-Cruit journey, Robin worked on a monologue from Richard III, in which she was able to declare the iconic line, “Now is the winter of our discontent.” Much like Richard III, who in Shakespeare’s play suffered physical deformity, Robin felt a similar sense of being misshapen: as a woman in the military, she had endured regular degradation, even cruelty, from her male counterparts. Often belittled and humiliated in brutal ways, Robin

learned to play along according to an unspoken code of female behavior. “I just took all that as normal,” says Robin. “But you get to a point after 13 years that THAT starts to impact you.” Owning her pain came slowly. After all, she was a well-trained airman who could adapt to adverse situations. It wasn’t until De-Cruit that Robin was able to access her own story in a productive way. “I was proud of my country, but in the midst of that love, there was a pain. [Shakespeare] put words to my feelings I didn’t know I needed justifying.” To any veteran out there who might be intimidated by a program like De-Cruit, Robin is quick to point out that the program is not meant to be an actor training program, and that you don’t need to have any prior knowledge or education in Shakespeare to benefit. She describes De-Cruit participants having “beautiful ah-ha moments” in the class as they collectively explore the Bard’s immortal words together, despite a wide variety of educational backgrounds and abilities. And, “You don’t have to memorize anything,” says Robin, who is now a co-instructor for De-Cruit. “For those vets who have suffered traumatic brain injuries, memorization may be problematic.” Amphibian has even moved De-Cruit offsite, so vets don’t feel intimidated by being in an actual theater. Since her experience with De-Cruit, Robin has gone on to author a book of sonnets entitled “Disguise Fair Nature: A Military Memoir In Sonnets” and is currently working with other female veterans on a project about their experience in the military. In her chapter entitled, “The Saving Grace of Storytelling With Shakespeare,” she writes:

The uniform I wear will never be a burden to me, just as being female will never be a burden. On the contrary, they are sources of my deepest honor. In the words of Shakespeare’s Hamlet, I “bear the whips and scorns of time, / Th’ oppressor’s wrong, the proud man’s contumely,” for those who serve alongside me. I will stand tall among the ranks of thousands of my Camouflaged Sisters; I will carry their standard when they are too tired and weak to continue. I will be a beacon for those who feel lost at sea, drifting alone in dark waters. May my truth bear witness to our shared story of service, and may you find courage to boldly speak your truth. You are not alone. Your story matters.

2019 was a big year for AlanaKayART! Not only were new products developed, but now, AlanaKayART can be found in boutiques across the DFW area. Selected by the readers of Fort Worth Magazine as Best Artist, Alana Kay (the genius behind AlanaKayART) completed her largest art installation and made her debut at Art Basel, an international art fair held annually in Switzerland, Miami, and Hong Kong. Closer to home, Alana partnered with John Worley to create a giant, Fort Worth-themed painting for National Coloring Day. Children and adults joined the celebration in Clearfork, coloring in a section or three. (The one-ofa-kind piece will be auctioned at the Jewel Charity Ball to benefit Cook Children’s.) In 2020, Alana is excited to expand her lines of fashion, accessories, and home décor, but she is most passionate about collaborating with other creative minds, especially women. Like her art, Alana’s journey is delicate yet truly beautiful.

Fort Worth Country Day (FWCD) has named Alexis Stern as the next leader of its Bass Upper School. A Texas native, Stern holds an Ed.M in Teaching and Learning from Harvard University and a B.A. in History from UT Austin, as well as having 13 years of teaching and leading experience in public, private, and independent schools. “I am most excited about joining an educational community that seeks to support student growth as well-rounded, thoughtful, resilient, and empathetic young adults,” Stern said. “I am inspired by FWCD’s faculty who are committed to their continued growth as educators and their focus on institutional priorities, including a clear commitment to making sure FWCD is a place where all are welcome.” Stern succeeds Steve Stackhouse as Head of Upper School, who will retire at the end of the 2019-2020 academic year. Eric Lombardi, FWCD’s Head of School, said, “Alexis’s teaching and leading experience, along with her passion for teachers, for students, for pedagogy, for school, and for education made her our first choice.” 22

Founded by two Fort Worthians with performing in their blood, the Slaughter Family Arts Awards seeks to “recognize and promote excellence and effort in the fine arts community,” by giving multiple scholarships to high school students. Rebecca and J. Mack Slaughter are former performers. Rebecca is a life-long dancer who performed with the School of American Ballet in New York City, while J. Mack is an actor/singer/ songwriter-turned emergency medicine physician, who in his spare time, runs a nonprofit called Music Meets Medicine. Together with their three children, they are thrilled to be continuing the Slaughter family’s long tradition of philanthropy (a predecessor founded what has become Baylor University Medical Center in Dallas). Awards will be given for Dance, Theater, Music, Voice, and Visual Arts. Proceeds from the awards event will support a student-driven fine arts outreach program for underserved communities. 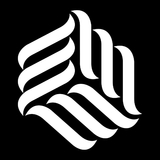