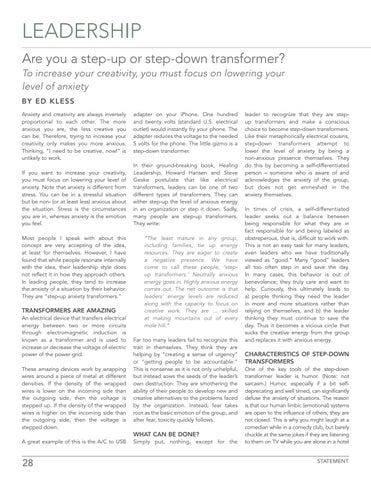 LEADERSHIP Are you a step-up or step-down transformer? To increase your creativity, you must focus on lowering your level of anxiety BY ED KLESS Anxiety and creativity are always inversely proportional to each other. The more anxious you are, the less creative you can be. Therefore, trying to increase your creativity only makes you more anxious. Thinking, “I need to be creative, now!” is unlikely to work. If you want to increase your creativity, you must focus on lowering your level of anxiety. Note that anxiety is different from stress. You can be in a stressful situation but be non- (or at least less) anxious about the situation. Stress is the circumstances you are in, whereas anxiety is the emotion you feel. Most people I speak with about this concept are very accepting of the idea, at least for themselves. However, I have found that while people resonate internally with the idea, their leadership style does not reflect it in how they approach others. In leading people, they tend to increase the anxiety of a situation by their behavior. They are “step-up anxiety transformers.”

adapter on your iPhone. One hundred and twenty volts (standard U.S. electrical outlet) would instantly fry your phone. The adapter reduces the voltage to the needed 5 volts for the phone. The little gizmo is a step-down transformer. In their ground-breaking book, Healing Leadership, Howard Hansen and Steve Geske postulate that like electrical transformers, leaders can be one of two different types of transformers. They can either step-up the level of anxious energy in an organization or step it down. Sadly, many people are step-up transformers. They write: “The least mature in any group, including families, tie up energy resources. They are eager to create a negative presence. We have come to call these people, ‘stepup transformers.’ Neutrally anxious energy goes in. Highly anxious energy comes out. The net outcome is that leaders’ energy levels are reduced along with the capacity to focus on creative work. They are … skilled at making mountains out of every mole hill.” Far too many leaders fail to recognize this trait in themselves. They think they are helping by “creating a sense of urgency” or “getting people to be accountable.” This is nonsense as it is not only unhelpful, but instead sows the seeds of the leader’s own destruction. They are smothering the ability of their people to develop new and creative alternatives to the problems faced by the organization. Instead, fear takes root as the basic emotion of the group, and after fear, toxicity quickly follows.

WHAT CAN BE DONE? A great example of this is the A/C to USB

Simply put, nothing, except for the

leader to recognize that they are stepup transformers and make a conscious choice to become step-down transformers. Like their metaphorically electrical cousins, step-down transformers attempt to lower the level of anxiety by being a non-anxious presence themselves. They do this by becoming a self-differentiated person – someone who is aware of and acknowledges the anxiety of the group, but does not get enmeshed in the anxiety themselves. In times of crisis, a self-differentiated leader seeks out a balance between being responsible for what they are in fact responsible for and being labeled as obstreperous, that is, difficult to work with. This is not an easy task for many leaders, even leaders who we have traditionally viewed as “good.” Many “good” leaders all too often step in and save the day. In many cases, this behavior is out of benevolence; they truly care and want to help. Curiously, this ultimately leads to a) people thinking they need the leader in more and more situations rather than relying on themselves, and b) the leader thinking they must continue to save the day. Thus it becomes a vicious circle that sucks the creative energy from the group and replaces it with anxious energy.

CHARACTERISTICS OF STEP-DOWN TRANSFORMERS One of the key tools of the step-down transformer leader is humor. (Note: not sarcasm.) Humor, especially if a bit selfdeprecating and well timed, can significantly defuse the anxiety of situations. The reason is that our human limbic (emotional) systems are open to the influence of others, they are not closed. This is why you might laugh at a comedian while in a comedy club, but barely chuckle at the same jokes if they are listening to them on TV while you are alone in a hotel STATEMENT 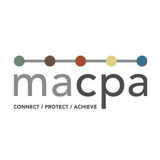