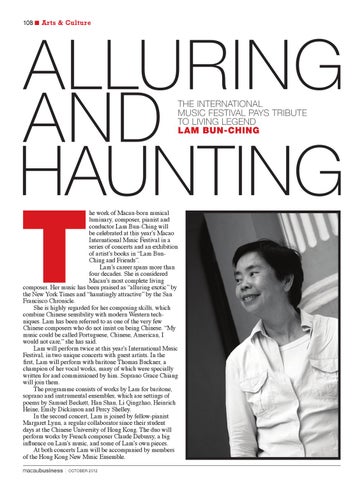 he work of Macau-born musical luminary, composer, pianist and conductor Lam Bun-Ching will be celebrated at this year’s Macao International Music Festival in a series of concerts and an exhibition of artist’s books in “Lam BunChing and Friends”. Lam’s career spans more than four decades. She is considered Macau’s most complete living composer. Her music has been praised as “alluring exotic” by the New York Times and “hauntingly attractive” by the San Francisco Chronicle. She is highly regarded for her composing skills, which combine Chinese sensibility with modern Western techniques. Lam has been referred to as one of the very few Chinese composers who do not insist on being Chinese. “My music could be called Portuguese, Chinese, American, I would not care,” she has said. Lam will perform twice at this year’s International Music Festival, in two unique concerts with guest artists. In the first, Lam will perform with baritone Thomas Buckner, a champion of her vocal works, many of which were specially written for and commissioned by him. Soprano Grace Chiang will join them. The programme consists of works by Lam for baritone, soprano and instrumental ensembles, which are settings of poems by Samuel Beckett, Han Shan, Li Qingzhao, Heinrich Heine, Emily Dickinson and Percy Shelley. In the second concert, Lam is joined by fellow-pianist Margaret Lynn, a regular collaborator since their student days at the Chinese University of Hong Kong. The duo will perform works by French composer Claude Debussy, a big influence on Lam’s music, and some of Lam’s own pieces. At both concerts Lam will be accompanied by members of the Hong Kong New Music Ensemble. OCTOBER 2012

Macau Business, a 132-page monthly magazine is De Ficção Multimedia Projects’ flagship publication. Launched in May 2004, focuses on Macau’s business community and economy and has achieved immense market credibility and penetration – in both circulation and reach – owing to its present monthly circulation of 25,000 issues and an aggregate growth rate of 800 percent to date. Besides local and international availability, Macau Business maintains a highly visited website – which recently logged its nine millionth pages viewed. Its subscribers span South East Asia, North America and Europe. 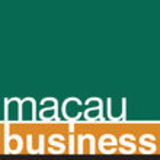