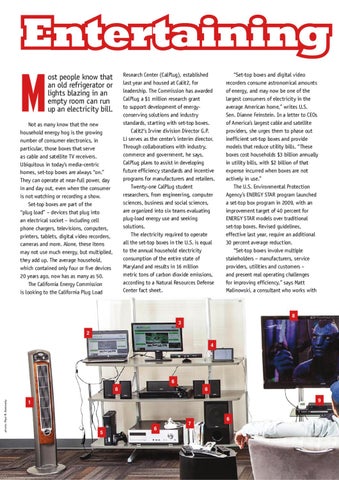 Research Center (CalPlug), established last year and housed at Calit2, for leadership. The Commission has awarded CalPlug a $1 million research grant to support development of energyconserving solutions and industry standards, starting with set-top boxes. Calit2’s Irvine division Director G.P. Li serves as the center’s interim director. Through collaborations with industry, commerce and government, he says, CalPlug plans to assist in developing future efficiency standards and incentive programs for manufacturers and retailers. Twenty-one CalPlug student researchers, from engineering, computer sciences, business and social sciences, are organized into six teams evaluating plug-load energy use and seeking solutions. The electricity required to operate all the set-top boxes in the U.S. is equal to the annual household electricity consumption of the entire state of Maryland and results in 16 million metric tons of carbon dioxide emissions, according to a Natural Resources Defense Center fact sheet.

ost people know that an old refrigerator or lights blazing in an empty room can run up an electricity bill.

Not as many know that the new household energy hog is the growing number of consumer electronics, in particular, those boxes that serve as cable and satellite TV receivers. Ubiquitous in today’s media-centric homes, set-top boxes are always “on.” They can operate at near-full power, day in and day out, even when the consumer is not watching or recording a show. Set-top boxes are part of the “plug load” – devices that plug into an electrical socket – including cell phone chargers, televisions, computers, printers, tablets, digital video recorders, cameras and more. Alone, these items may not use much energy, but multiplied, they add up. The average household, which contained only four or five devices 20 years ago, now has as many as 50. The California Energy Commission is looking to the California Plug Load

“Set-top boxes and digital video recorders consume astronomical amounts of energy, and may now be one of the largest consumers of electricity in the average American home,” writes U.S. Sen. Dianne Feinstein. In a letter to CEOs of America’s largest cable and satellite providers, she urges them to phase out inefficient set-top boxes and provide models that reduce utility bills. “These boxes cost households $3 billion annually in utility bills, with $2 billion of that expense incurred when boxes are not actively in use.” The U.S. Environmental Protection Agency’s ENERGY STAR program launched a set-top box program in 2009, with an improvement target of 40 percent for ENERGY STAR models over traditional set-top boxes. Revised guidelines, effective last year, require an additional 30 percent average reduction. “Set-top boxes involve multiple stakeholders – manufacturers, service providers, utilities and customers – and present real operating challenges for improving efficiency,” says Matt Malinowski, a consultant who works with 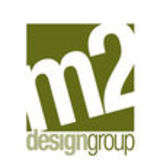