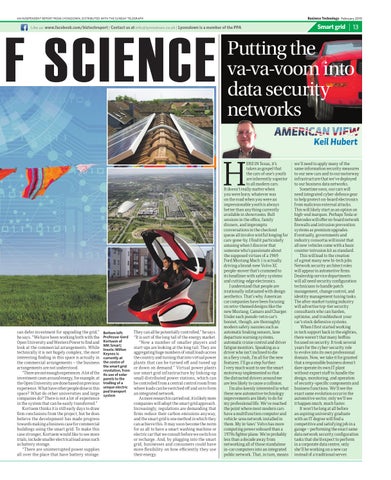 AN INDEPENDENT REPORT FROM LYONSDOWN, DISTRIBUTED WITH THE SUNDAY TELEGRAPH

can defer investment for upgrading the grid,” he says. “We have been working both with the Open University and Western Power to find and look at the commercial arrangements. While technically it is not hugely complex, the most interesting finding in this space is actually in the commercial arrangements – the business arrangements are not understood. “There are not enough experiences. A lot of the investment cases around energy, for example, at the Open University are done based on previous experience. What have other people done in this space? What do other universities and large companies do? There is not a lot of experience in the system that can be easily transferred.” Kortuem thinks it is still early days to draw firm conclusions from the project, but he does believe the development has made progress towards making a business case for commercial buildings using the smart grid. To make this case stronger, Kortuem would like to see more trials, include smaller electrical load areas such as battery storage. “There are uninterrupted power supplies all over the place that have battery storage.

Bottom left: Professor Gerd Kortuem of MK:Smart; Insets: Milton Keynes is currently at the centre of the smart grid revolution, from its use of solar panels to the trialling of a unique electric pod transport system

They can all be potentially controlled,” he says. “It is sort of the long tail of the energy market. “Now a number of smaller players and start-ups are looking at the long tail. They are aggregating huge numbers of small loads across the country and turning that into virtual power plants that can be turned off and tuned up or down on demand.” Virtual power plants use smart grid infrastructure by linking-up small distributed power stations, which can be controlled from a central control room from where loads can be switched off and on to form an integrated network. As more research is carried out, it is likely more companies will adopt the smart grid approach. Increasingly, regulations are demanding that firms reduce their carbon emissions anyway, and the smart grid is one method in which they can achieve this. It may soon become the norm for us all to have a smart washing machine or electric car that we consult before we switch on or recharge. And, by plugging into the smart grid, businesses and consumers could have more flexibility on how efficiently they use their energy.

ERE IN Texas, it’s taken as gospel that the cars of one’s youth are inherently superior to all modern cars. It doesn’t really matter when you were born; whatever was on the road when you were an impressionable youth is always better than anything currently available in showrooms. Bull sessions in the office, family dinners, and impromptu conversations in the checkout queue all involve wistful longing for cars-gone-by. I find it particularly amusing when I discover that someone who’s passionate about the supposed virtues of a 1969 Ford Mustang Mach 1 is actually driving a brand-new Volvo XC people-mover that’s crammed to its headliner with safety systems and cutting-edge electronics. I understand that people are irrationally infatuated with design aesthetics. That’s why American car companies have been focusing on retro-themed designs like the new Mustang, Camaro and Charger. Under each pseudo-retro car’s bonnet, though, are thoroughly modern safety nannies such as automatic braking sensors, lane departure warning systems, automatic cruise control and driver fatigue monitors. Speaking as a driver who isn’t inclined to die in a fiery crash, I’m all for the new features. I’ll go a step further: I very much want to see the smart motorway implemented so that the distracted drivers around me are less likely to cause a collision. I’m also keenly interested in what these new automotive technology improvements are likely to do for my professional life. We’ve reached the point where most modern cars have a multifunction computer and vehicle-area network installed in them. My in-laws’ Volvo has more computing power onboard than a 1970s fighter plane. We’re probably less than a decade away from networking all of those standalone in-car computers into an integrated public network. That, in turn, means

we’ll need to apply many of the same information security measures to our new cars and to our motorway infrastructure that we’ve deployed to our business data networks. Sometime soon, our cars will need integrated cyber-defence gear to help protect on-board electronics from malicious external attacks. This will likely start as an option on high-end marques. Perhaps Tesla or Mercedes will offer on-board network firewalls and intrusion prevention systems as premium upgrades. Eventually, governments and industry consortia will insist that all new vehicles come with a basic counter-intrusion kit as standard. This will lead to the creation of a great many new hi-tech jobs. Network security architect roles will appear in automotive firms. Dealership service departments will all need security configuration technicians to handle patch management, change control, and identity management tuning tasks. The after-market tuning industry will advertise top-tier security consultants who can harden, optimise, and troubleshoot your car’s stock defensive systems. When I first started working in tech support back in the eighties, there weren’t that many boffins focused on security. It took several years for the cyber-security role to evolve into its own professional domain. Now, we take it for granted that a responsible business doesn’t dare operate its own IT plant without expert staff to handle the design, monitoring, and operation of security-specific components and business functions. We’ll see the exact same evolution occur in the automotive sector, only we’ll see it happen much, much faster. It won’t be long at all before an aspiring university graduate with an IT degree will find a competitive and satisfying job in a garage – performing the exact same data network security configuration tasks that she’d expect to perform in a corporate data centre, only she’ll be working on a new car instead of a traditional server.