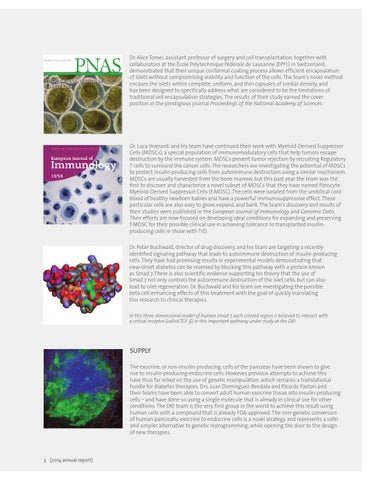 Dr. Alice Tomei, assistant professor of surgery and cell transplantation, together with collaborators at the École Polytechnique Fédérale de Lausanne (EPFL) in Switzerland, demonstrated that their unique conformal coating process allows efficient encapsulation of islets without compromising viability and function of the cells. The team&#39;s novel method encases the islets within complete, uniform, and thin capsules of similar density, and has been designed to specifically address what are considered to be the limitations of traditional cell encapsulation strategies. The results of their study earned the cover position in the prestigious journal Proceedings of the National Academy of Sciences.

Dr. Luca Inverardi and his team have continued their work with Myeloid-Derived Suppressor Cells (MDSCs), a special population of immunomodulatory cells that help tumors escape destruction by the immune system. MDSCs prevent tumor rejection by recruiting Regulatory T cells to surround the cancer cells. The researchers are investigating the potential of MDSCs to protect insulin-producing cells from autoimmune destruction using a similar mechanism. MDSCs are usually harvested from the bone marrow, but this past year the team was the first to discover and characterize a novel subset of MDSCs that they have named fibrocyteMyeloid-Derived Suppressor Cells (f-MDSC). The cells were isolated from the umbilical cord blood of healthy newborn babies and have a powerful immunosuppressive effect. These particular cells are also easy to grow, expand, and bank. The team’s discovery and results of their studies were published in the European Journal of Immunology and Genomic Data. Their efforts are now focused on developing ideal conditions for expanding and preserving f-MDSC for their possible clinical use in achieving tolerance to transplanted insulinproducing cells in those with T1D. Dr. Peter Buchwald, director of drug discovery, and his team are targeting a recently identified signaling pathway that leads to autoimmune destruction of insulin-producing cells. They have had promising results in experimental models demonstrating that new-onset diabetes can be reversed by blocking this pathway with a protein known as Smad 7. There is also scientific evidence supporting his theory that the use of Smad 7 not only controls the autoimmune destruction of the islet cells, but can also lead to islet regeneration. Dr. Buchwald and his team are investigating the possible beta cell-enhancing effects of this treatment with the goal of quickly translating this research to clinical therapies. In this three-dimensional model of human Smad 7, each colored region is believed to interact with a critical receptor (called TGF-ß) in this important pathway under study at the DRI.

SUPPLY The exocrine, or non-insulin-producing, cells of the pancreas have been shown to give rise to insulin-producing endocrine cells. However, previous attempts to achieve this have thus far relied on the use of genetic manipulation, which remains a translational hurdle for diabetes therapies. Drs. Juan Dominguez-Bendala and Ricardo Pastori and their teams have been able to convert adult human exocrine tissue into insulin-producing cells – and have done so using a single molecule that is already in clinical use for other conditions. The DRI team is the very first group in the world to achieve this result using human cells with a compound that is already FDA-approved. The non-genetic conversion of human pancreatic exocrine to endocrine cells is a novel strategy and represents a safer and simpler alternative to genetic reprogramming, while opening the door to the design of new therapies.

This past year, our generous donors have enabled DRI scientists to make progress toward our singular goal - to discover a biological cure for diabetes. 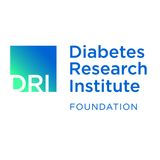