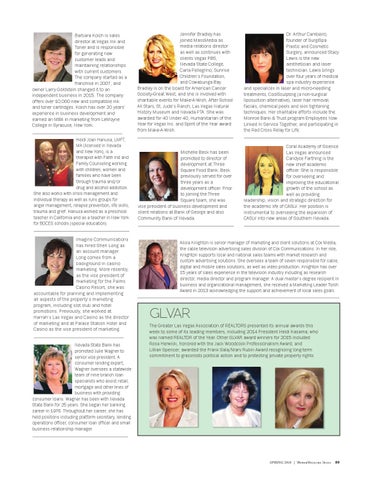 Barbara Koich is sales director at Vegas Ink and Toner and is responsible for generating new customer leads and maintaining relationships with current customers. The company started as a franchise in 2007, and owner Larry Goldstein changed it to an independent business in 2015. The company offers over 10,000 new and compatible ink and toner cartridges. Koich has over 20 years’ experience in business development and earned an MBA in marketing from LeMoyne College in Syracuse, New York. Heidi Joan Hanusa, LMFT, MA (licensed in Nevada and New York), is a therapist with Faith Ind and Family Counseling working with children, women and families who have been through trauma and/or drug and alcohol addiction. She also works with crisis management and individual therapy as well as runs groups for anger management, relapse prevention, life skills, trauma and grief. Hanusa worked as a preschool teacher in California and as a teacher in New York for BOCES schools (special education). Imagine Communications has hired Sheri Long as an account manager. Long comes from a background in casino marketing. More recently, as the vice president of marketing for the Palms Casino Resort, she was accountable for planning and implementing all aspects of the property’s marketing program, including slot club and hotel promotions. Previously, she worked at Harrah’s Las Vegas and Casino as the director of marketing and at Palace Station Hotel and Casino as the vice president of marketing. Nevada State Bank has promoted Julie Wagner to senior vice president. A consumer lending expert, Wagner oversees a statewide team of nine branch loan specialists who assist retail, mortgage and other lines of business with providing consumer loans. Wagner has been with Nevada State Bank for 25 years. She began her banking career in 1976. Throughout her career, she has held positions including platform secretary, lending operations officer, consumer loan officer and small business relationship manager.

Jennifer Bradley has joined MassMedia as media relations director as well as continues with clients Vegas PBS, Nevada State College, Carla Pellegrino, Sunrise Children’s Foundation, and Cowabunga Bay. Bradley is on the board for American Cancer Society-Great West, and she is involved with charitable events for Make-A-Wish, After School All Stars, St. Jude’s Ranch, Las Vegas Natural History Museum and Nevada PTA. She was awarded for 40 Under 40, Humanitarian of the Year for Vegas Inc. and Spirit of the Year award from Make-A-Wish.

Michelle Beck has been promoted to director of development at Three Square Food Bank. Beck previously served for over three years as a development officer. Prior to joining the Three Square team, she was vice president of business development and client relations at Bank of George and also Community Bank of Nevada.

Coral Academy of Science Las Vegas announced Candyce Farthing is the new chief academic officer. She is responsible for overseeing and improving the educational growth of the school as well as providing leadership, vision and strategic direction for the academic life of CASLV. Her position is instrumental to overseeing the expansion of CASLV into new areas of Southern Nevada.

Alicia Knighton is senior manager of marketing and client solutions at Cox Media, the cable television advertising sales division of Cox Communications. In her role, Knighton supports local and national sales teams with market research and custom advertising solutions. She oversees a team of seven responsible for cable, digital and mobile sales solutions, as well as video production. Knighton has over 15 years of sales experience in the television industry including as research director, media director and program manager. A dual master’s degree recipient in business and organizational management, she received a Marketing Leader Torch Award in 2013 acknowledging the support and achievement of local sales goals.

GLVAR The Greater Las Vegas Association of REALTORS presented its annual awards this week to some of its leading members, including 2014 President Heidi Kasama, who was named REALTOR of the Year. Other GLVAR award winners for 2015 included Rosa Herwick, honored with the Jack Woodcock Professionalism Award, and Lillian Spencer, awarded the Frank Sala/Marv Rubin Award recognizing long-term commitment to grassroots political action and to protecting private property rights.

Las Vegas Woman, the only magazine for women, by women. Reinvigorating the community of women across the Vegas Valley.